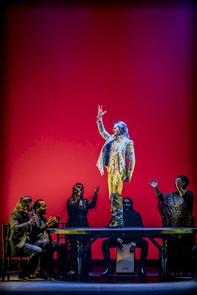 Farruquito, heir to the world's most renowned Gypsy flamenco dynasty, has been called the greatest flamenco dancer of this century by The New York Times. He made his first international stage appearance on Broadway at the age of four alongside his grandfather, "El Farruco," and spent his formative years immersed in the legendary Farruco school. He has created and directed over 15 works since the age of 11 and has been hailed by critics and audiences alike for his prodigious artistry, profound poetry and captivating beauty. He was voted one of the "World's 50 Most Beautiful People" by People magazine. Farruquito has made it his life's mission to share the purest form of flamenco on stages all around the world. The concept of his flamboyant solo dancing as he describes it is simple: "musicians play, I dance, everyone improvising in the moment." The New York Times referred to his 2016 return after a long absence as "a king reclaiming his realm."