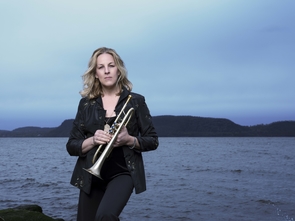 Award-winning musician Ingrid Jensen has been hailed as one of the most gifted jazz trumpeters of her generation. A recognized force in modern jazz, in her 25-year career she has released a great many albums, winning the Juno award for her very first release, and accruing numerous nominations since.

She has become an influential teacher and is a powerhouse in European jazz. She's performed all over Japan, South America, and Europe, taught at the Bruckner Conservatory in Austria, and eventually ended up in New York City, playing with both Maria Schneider's and Darcy James Argue's jazz orchestras, as well as leading her own quintet, quartet and trio. She has worked with a wide variety of musicians throughout the world, including Esperanza Spalding, Clark Terry and Sarah McLachlan. Recently, Ingrid has been performing with the Grammy-winning Terri-Lyne Carrington and her Mosaic project and the Juno-award winning Christine Jensen Jazz Orchestra.

This event is part of the Fred Fox School of Music AZ Jazz Festival.