Exhibit – 'The Life and Legacy of Raúl H. Castro' 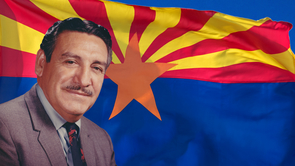 Born in Mexico to an impoverished family, Castro worked tirelessly to rise above hurdles and cultural barriers. After graduating from the University of Arizona James E. Rogers College of Law, he became a community leader and eventually an inspiration for a generation of Arizonans, including Mexican Americans and immigrant families. Castro's advocacy for education, improving foreign relations in Latin America, immigration, equity in medical care, eliminating land fraud and ending sexual and racial discrimination in the workplace was ahead of its time.

This exhibit about his life and impact showcases original photographs, documents and ephemera from The Raúl H. Castro Papers housed in the University Libraries Special Collections, the Daniel F. Cracchiolo Law Library, the Center for Latin American Studies at the College of Social and Behavioral Sciences, and the personal collection of Beth Castro. The painting, "El Cuento de Raúl Castro" (Raúl Castro's Story), is also on loan to Special Collections from artist James Covarrubias for the exhibit.