Close Encounter of the Rocky Kind

Discovered by a UA astronomer six years ago, a city-block sized space rock will race past the Earth closer than the moon in what will be the closest encounter of an object of this size in more than 60 years.
Daniel Stolte
,
University Communications
Nov. 4, 2011
Resources for the Media 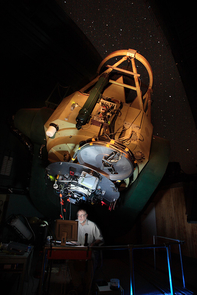 (Click image to enlarge) Robert McMillan observing with an experimental instrument unrelated to his asteroid work in 2007, in the dome of the Steward Observatory's 2.3-meter Bok Telescope on Kitt Peak. (Photo: Dave Harvey/Steward Observatory) 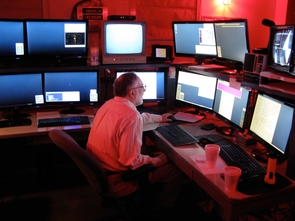 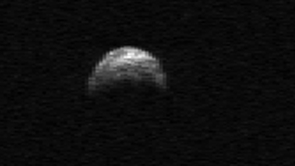 When an asteroid the size of a city block zips past the Earth about 29,000 miles per hour on Nov. 8, it will seem like an encounter with an old acquaintance to Univeristy of Arizona astronomer Robert McMillan.

Six years ago, McMillan was taking images of the night sky with an 83-year-old telescope on Kitt Peak searching for asteroids, chunks of rock that weren't swept up into one of the nascent planets during the formation of our solar system and have traveled around the sun ever since. That is how he discovered 2005 YU55.

"2005 YU55 is one of the potentially hazardous asteroids that make close approaches from time to time because their orbits either approach or intersect the orbit of the Earth," said McMillan, who is an associate research scientist with the UA's Lunar and Planetary Laboratory with a joint appointment in the UA's Steward Observatory.

The asteroid – or more correctly, minor planet – will approach the Earth within about 202,000 miles, closer than the distance to the moon. No object of comparable size has come this close since 1976, and none is going to until 2028, when another asteroid dubbed 2001 WN5 will pass about halfway between the moon and the Earth.

Although 2005 YU55's orbit takes it into Earth's neighborhood every once in a while, there is no chance of it hitting our planet for at least another 100 years. However, because asteroids' trajectories change over time, there is a slight chance it may do so at some point in the future.

Enter SPACEWATCH and the Catalina Sky Survey, two research programs at the UA's Lunar and Planetary Laboratory dedicated to the study of small objects like asteroids and comets. Founded in 1980 by the late Tom Gehrels and McMillan, who is now its principal investigator, SPACEWATCH aims to find objects that might pose a hazard to Earth and gain a better understanding of how the solar system came to be.

"We complement each other in what we focus on," McMillan said. "With SPACEWATCH, we spend a lot of our time doing follow-ups on objects that have already been discovered through other programs. Because we can go after fainter and dimmer objects, we can chase them longer after their time of discovery as they are hurtling out deeper into space."

SPACEWATCH was the first program dedicated to the discovery and tracking of asteroids that made use of charge-coupled devices, or CCDs, which are now found in many digital cameras, instead of photographic plates to scan the skies. The 0.9-meter telescope, built in 1921, was the first telescope the UA's Steward Observatory ordered. Originally housed on campus, it was moved to Kitt Peak in 1962, where it has been in operation ever since.

The search for asteroids is challenging and tedious.

"When you look through a telescope, asteroids don't look any different from stars," McMillan explained. "The only difference is that they're moving, and to detect that motion we have to take a series of images. Usually we take three images spaced 20 or 30 minutes apart."

Next, the observers run specialized software to examine those images for any star-like images that are moving from one image to the next. The software compiles them into a list of candidates that is presented to the observer for their approval.

"We have to double-check the images, because the software is not perfect and sometimes picks up things that aren't really asteroids," McMillan said.

Objects that pass the review are then forwarded to the Minor Planet Center, or MPC, at the Smithsonian Astrophysical Observatory in Cambridge, Mass.

In determining which ones could potentially slam into Earth, asteroid hunters look for those that are traveling faster than the more common Main Belt Asteroids, which orbit the sun between the orbits of Mars and Jupiter and do not pose a threat. Objects meeting those criteria are sent to the MPC separately with special designations as candidates for Near Earth Objects, or NEOs. The MPC reviews them and decides which ones should be designated as NEOs.

That is how 2005 YU55 went from being a faint speck of light to a Potentially Hazardous Asteroid.

"The MPC posted it on their confirmation page, which is monitored by everybody who follows up newly discovered Near Earth Objects," McMillan said. "So we followed it up on subsequent nights and over the following month. Over time, we refined its orbit to the point that NASA's Jet Propulsion Laboratory listed a large number of potential close encounters with the Earth."

"Now, after 767 observations by ground-based observers, we have the orbit of that asteroid really nailed down, so we know it's not going to hit the Earth on Nov. 8."

In addition to observation with optical telescopes, radar measurements revealed 2005 YU55's distance, velocity and size. The coal-black asteroid, which is almost spherical in shape and measures about 1,300 feet in diameter, slowly spins as it travels through space, completing a rotation every 18 hours.

According to McMillan, the gravity of other planets, as well as the pressure of sunlight affect the paths of asteroids. In addition, a phenomenon known as the Yarkovsky Effect – slight asymmetries in heat distribution that arise as the object soaks up sunlight and radiates it back into space as it turns – plays a role. Those asymmetries exert forces that add up over time to cause the asteroid to veer off its orbit ever so slightly.

"We now know that 2005 YU55 is a carbonaceous chondrite asteroid that is relatively dark and contains carbon," McMillan said, "But long-range trajectories  are very difficult to predict when you don't know the exact physical properties of the asteroid."

To better understand the properties of Potentially Hazardous Asteroids, the Lunar and Planetary Laboratory is leading the OSIRIS-REx mission, an $800 million NASA-funded mission to visit another carbonaceous chondrite, 1999 RQ36.

The OSIRIS-REx spacecraft will study the asteroid for a year, then scoop up a sample and bring it back to Earth in 2023.