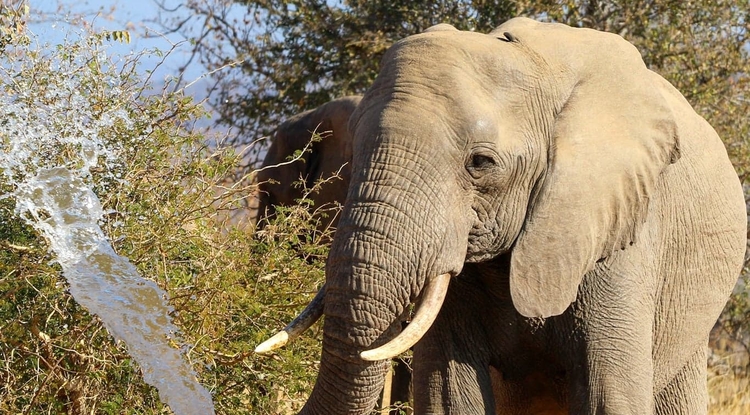 A project involving vulnerable elephant populations is one of many focuses of the Conservation Research Laboratory at the University of Arizona, whose mission includes developing effective and progressive approaches to societal challenges to maintain biodiversity and conserve natural resources. (Courtesy of Chris Banotai)

An anonymous donor's generosity will help train the next generation of wildlife conservation biologists in the School of Natural Resources and the Environment and strengthen the school's outreach opportunities abroad.
Rosemary Brandt
,
College of Agriculture and Life Sciences
Oct. 9, 2019
Resources for the Media 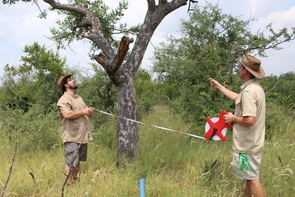 Graduate student Christopher Banotai is trying to curb public perception of the elephants' role in the decline of marula trees, which are ecologically, economically and culturally important in the African savannah. (Courtesy of Chris Banotai)

The University of Arizona College of Agriculture and Life Sciences has received a $1 million commitment from a Tucson woman to support wildlife conservation efforts internationally.

The donor, who asked to not be named, came to Tucson for graduate school and, after completing her degree, moved to New York to launch a career on Wall Street. Having never forgotten the Old Pueblo or her time at the University of Arizona, she decided to retire in Tucson. Upon her return, she learned about the UA Conservation Research Laboratory, which is led by John Koprowski, director of the School of Natural Resources and the Environment.

A passionate advocate for the protection of wild animals and irreplaceable places, the donor says she "decided to make this investment now because time is of the essence for so many species whose futures are at stake."

The commitment, the donor's second within the span of a year, will help train the next generation of wildlife conservation biologists in the School of Natural Resources and the Environment and strengthen the school's outreach opportunities abroad.

"Our efforts are directed at making a difference in wildlife conservation through active collaboration with organizations in our partner countries," Koprowski said. "Increasing in-country opportunities is critical to successful conservation, as local communities need to be engaged in decisions to implement and sustain efforts."

A project involving vulnerable elephant populations in the African savanna first captured the donor's attention, spurring an initial commitment of $100,000. The funds helped Koprowski recruit graduate student Christopher Banotai and bolster Banotai's efforts to curb public perception of the elephants' role in the decline of marula trees, which are ecologically, economically and culturally important in the region.

"We are tracking elephant impact on adult marula trees throughout the wildlife reserve to get a better understanding of what role elephants truly play in the decline of the species and what can be done to better the outcome for humans, marula trees and the elephants themselves," Banotai said. "I could not be more grateful for the opportunities that I have because of this funding."

In collaboration with nongovernmental organizations working to recruit and employ people in underprivileged local communities, such as Transfrontier Africa and the Bush Babies Environmental Education Program, Banotai hopes to reinforce positive public perceptions of wildlife conservation work and broaden appreciation of the natural world.

"Our donor's generosity and insight, combined with a passion for protecting our world's endangered animals, will not only help Dr. Koprowski continue his vital research work, but enable us to train conservation leaders of the future," said Shane Burgess, UA vice president for agriculture, life and veterinary sciences, and Cooperative Extension.

Impressed by the school's continued focus on community-based wildlife conservation efforts, the donor renewed her support with an additional commitment of $1 million.

"This gift is a tremendous vote of confidence in the work of the Conservation Research Lab and a great partnership between a donor and faculty member who share a deep commitment to real progress toward wildlife protection," said John-Paul Roczniak, president and CEO of the University of Arizona Foundation.

The latest commitment will further conservation projects both locally and internationally, including one of the Conservation Research Laboratory's longest running initiatives – the monitoring and protection of endangered Mount Graham red squirrels, whose population plummeted to 35 squirrels following the 2017 fire in the Pinaleño Mountains within the Coronado National Forest.

The commitment will also permit continued efforts to protect river dolphins in Nepal and Andean bears in Colombia, as well initiate projects on declining marmots and Gobi bears in Mongolia, red pandas and tigers in Nepal, and others. The gift also permits the UA to share expertise through training and workshops for local land managers, students and community leaders internationally.

"We are very grateful for this donor's continued support of the University of Arizona," said UA President Robert C. Robbins. "The work that she is supporting is so important for our role as a global land-grant university, and she is enabling student success through funding for graduate research. With this gift, Dr. Koprowski and his team will be able to deepen our understanding of a serious challenge, build knowledge and capacity through international collaboration, and create positive impact in the survival of endangered animals. We are so glad that she made a connection with the UA and that she entrusts us to make a difference in a cause she feels passionate about."