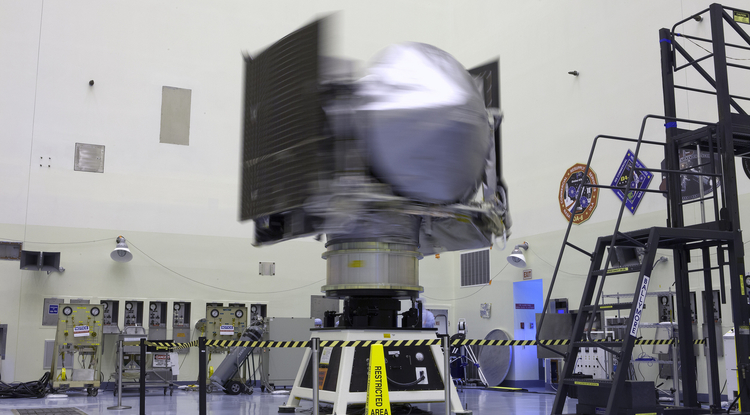 NASA's OSIRIS-REx spacecraft rotates on a spin table during a weight and center of gravity test inside the Payload Hazardous Servicing Facility at Kennedy Space Center in Florida. The spacecraft is being prepared for its scheduled launch on Sept. 8. (Photo: NASA/Kim Shiflett)

2 Weeks to Launch for OSIRIS-REx Mission

The Earth days are numbered for the spacecraft of the UA-led asteroid sample return mission. After months of meticulous testing at NASA's Kennedy Space Center, the craft is about to be enclosed in the nose cone of its Atlas V launch rocket.
Daniel Stolte
,
University Relations - Communications
Aug. 24, 2016
Resources for the Media
Extra Info:

The University of Arizona's Lunar and Planetary Laboratory will hold its free, annual open house, "Summer Science Saturday," on Saturday, Aug. 27, from 10 a.m. to 4 p.m. The theme of this year’s event is the UA/LPL OSIRIS-REx mission, the first NASA mission to capture an asteroid sample and return it to Earth. Information and a detailed schedule are available here.

What:
OSIRIS-REx Pre-Launch Event
When:
Saturday, Aug. 27, 10 a.m. to 4 p.m.
Where:
Kuiper Space Sciences building, 1629 E. University Blvd.
Tucked into a shipping container, NASA's OSIRIS-REx spacecraft is unloaded from an Air Force C-17 cargo aircraft on the Shuttle Landing Facility runway at Kennedy Space Center in Florida. The spacecraft traveled from Lockheed Martin's facility near Denver to Kennedy to begin processing for its upcoming launch. (Photo: Bill White)
"We will apply the information we will gather at Bennu to thousands of asteroids in our solar system," says Dante Lauretta, UA professor of planetary science and OSIRIS-REx principal investigator. "We'll be able to compare our measurements to what we thought we knew about asteroids. The sample return is the gift that keeps on giving."

If the OSIRIS-REx spacecraft were an astronaut, chances are it would be very nervous by now.

With just two weeks left until the scheduled launch, the days of the SUV-size probe here on Earth are numbered. Once the engines of its Atlas V rocket launch vehicle ignite into 860,000 pounds of thrust, there is no coming back. For the next seven years, the spacecraft will be enshrouded in a cold, dark vacuum.

Two years into its silent journey, the spacecraft's robotic eyes will make out a tiny dot, barely standing out against the blackness of the void. As it comes nearer, the dot becomes a slowly spinning, mountain-size space rock covered in dark gravel and dust — the asteroid Bennu. For the robotic probe, the time will have come to wake up and get to work.

Right now, the spacecraft is the center of attention at NASA's Kennedy Space Center in Cape Canaveral, Florida. Moving carefully about, a team of engineers and technicians clad in bunny suits align fasteners and tighten bolts as they encapsulate OSIRIS-REx into the rocket's nose-cone fairing. Between May 20 — when a U.S. Air Force C-17 "Globemaster" plane lowered its back ramp and workers rolled out the shipping container with the spacecraft inside to truck it into the cleanroom facility — and now, the sample-fetching robot has undergone a tightly choreographed sequence of testing, measuring, adjusting and retesting.

"We have done a spin balance test, we took the solar arrays off and cleaned them, put them back on, filled the tanks with fuel, and installed all the thermal protective blankets on the spacecraft," said Mike Donnelly, OSIRIS-REx project manager at NASA's Goddard Space Flight Center in Greenbelt, Maryland.

Other tests made sure that the space probe's software runs flawlessly and its navigational and scientific instruments work as they are supposed to. The folding and unfolding of its solar panels was rehearsed.

But once the testing crew has unplugged the last cable and checked the last box on their clipboards, there are no more dress rehearsals. Carefully monitored to avoid any type of contamination with earthly substances, the spacecraft soon will be on its own, sealed between two clamshell-like pieces of faring in preparation to be hoisted atop its launch vehicle.

"The most exciting part about any planetary exploration mission is that you are going to a new world," said the University of Arizona's Dante Lauretta, the mission's principal investigator. "This spacecraft will bring us pristine organic material from the dawn of our solar system that we don't have in our meteorite collections. It is a great adventure, because we are going out into the unknown and we are bringing back a scientific treasure. That's what has driven me for the past 12 years and will keep driving me for the next seven."

Because no explorer, neither human nor robotic, has ever attempted to do what OSIRIS-REx was designed and built to do — scoop up to four pounds of dust and gravel from a chunk of space debris left over from the birth of our solar system 4.5 billion years ago — NASA relied as much on tried and proven technology as possible, while blazing the trail where necessary.

Design elements were carried over from NASA's Mars Reconnaissance Orbiter, which holds another UA space exploration marvel, the HiRISE Mars imaging camera; from Juno, the probe that swung into close orbit around Jupiter in early July; and MAVEN, another Martian satellite currently orbiting Mars.

OSIRIS-REx's sample return capsule is virtually identical to that of NASA's Stardust spacecraft, which flew through the tail of comet Wild 2 in 2004 to collect dust grains and return them to Earth.

No template was available for one of OSIRIS-REx's most critical components, however: its sampling mechanism.

According to Rich Kuhns, OSIRIS-REx program manager with Lockheed Martin Space Systems in Denver, where the spacecraft was assembled, the design started as a contest, encouraging the community to come up with the best method to collect material from a dust-covered mountain slowly spinning in space.

The winning design of TAGSAM — short for Touch-and-Go Sample Acquisition Mechanism — was submitted in form of a contraption whose inventor "used a Solo cup and an air compressor in their driveway," Kuhns said.

TAGSAM consists of a round disc, 12 inches in diameter, attached to a pogo stick that enables it to "give the asteroid a high five," as Kuhns put it. Throughout extensive tests using a wide range of materials, the sampling mechanism collected an average of 300 grams, five times more than the minimum sample return mandated by NASA. No other mission has returned that much material from space since the Apollo astronauts, who hauled back about 800 pounds of moon rocks over the course of their excursions across the lunar surface.

To Jim Green, director of NASA's Planetary Science Division, "one of the amazing things about OSIRIS-REx is that it addresses all of the science goals that planetary science has at NASA: how the solar system works, how it formed, how it informs our understanding of life in solar system and elsewhere, and how we can understand the resources and hazards of asteroids and better characterize those."

The timeline NASA uses for all of its planetary exploration follows a well-defined sequence, he explained, starting with observations of the object from Earth. Then it's the launch of a first spacecraft for a flyby, the use of another to land, and finally the sending of a probe for a sample.

"OSIRIS-REx does this whole sequence on its own," Green said. "First it will study Bennu, then orbit and study it even closer, and the grand prize is the sample acquisition. We don't technically land, but we make contact."

Scientists expect the grains that will come back to Earth to reveal stories from the origin of the solar system that they couldn't get any other way. The mission overcomes an obstacle that has long frustrated meteorite scientists, Lauretta explained.

"With meteorites, we don't know where they came from, they disrupt in the air, they get scattered, they are being collected in uncontrolled ways, and they're contaminated with terrestrial material," he said. "When you're looking for trace amounts of organic compounds, having an uncontrolled sample acquisition is not satisfactory. I compare it to a forensic investigation: With OSIRIS-REx, we have control over the sample from when it was on the asteroid all the way until we have it in our labs."

On Monday, OSIRIS-REx will travel its farthest distance from the ground yet. Dangling from a crane, the robotic explorer will go up 160 feet into the air, to be mounted on top of its rocket. It will then sit there, until 7:05 p.m. Eastern Daylight Time on Sept. 8, when it is scheduled to race toward the sky on a journey that will take it 70 billion times farther than that.

Go, OSIRIS-REx. Earth can't wait to see what you find.