Scheduled to begin operations in 2021, the Giant Magellan Telescope will allow astronomers to peer deeper into the universe than ever before. 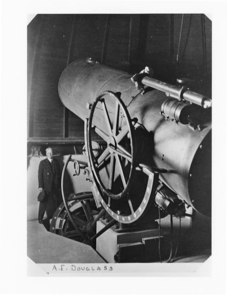 On Oct. 19, 1916, all classes were canceled at the University of Arizona and a huge bonfire was staged to celebrate the two largest donations in the University's history at the time: $75,000 for a new mining building and $60,000 to build an observatory.

"Money to Be Used to Buy Telescope of Huge Size," read the headline of the day in the Arizona Daily Star. While the telescope, an ironclad tube with a 36-inch mirror, would be considered modest at best in today's world, the gift — worth about $1.26 million today — did put the UA on track to becoming one of the world leaders in astronomical endeavors.

Now, almost a century later, UA astronomers have a reason to celebrate an equally impactful gift supporting the UA's partnership in the construction of the Giant Magellan Telescope, a telescope with an effective mirror diameter of 80 feet (25 meters). Thanks to a donation of $20 million from Richard F. Caris, the University is poised to take its next giant leap into the future of space science.

The UA is one of 11 institutions that have joined forces to build the GMT. Located in Chile's Atacama Desert, the GMT will have more than six times the light-gathering area of the largest telescopes in existence today, and 10 times the resolution of NASA's Hubble Space Telescope.

"We are grateful that Richard F. Caris has provided this generous gift to the UA, which will support our participation in the GMT, a critically important effort in the space sciences," said UA President Ann Weaver Hart. "Mr. Caris has been an ardent supporter of the University for more than a decade and his contributions have helped establish the UA’s international prominence in astronomical research."

The gift of 1916, made by amateur astronomer Lavinia Steward of Oracle, Arizona, created the UA's Steward Observatory and, in the words of UA astronomer Tom Fleming, "was the first spark of the excellence in space research that the UA would be known for."

"This gift is transformational in that it not only moves the GMT project forward, but also UA's astronomy endeavor as a whole," said Buell Jannuzi, head of the UA Department of Astronomy and director of Steward Observatory. "Through the technology developed at our mirror lab, the UA enables the GMT to happen in the first place. This gift enables the UA to continue at the forefront of astronomical research through access to the telescope's unprecedented capabilities."

Dennis Zaritsky, professor of astronomy and deputy director of Steward Observatory, said astronomy "has come a long way" since those early days.

"To a large degree, our future progress depends on philanthropy," he said. "Back then, people were observing galaxies, but they didn't know what they were. Nobody knew about exotic objects such as black holes, and no planets were known to exist outside our own solar system."

Progress in astronomy over the last 100 years has been driven by technology, especially bigger and better telescopes. For the most part, these large facilities have been funded by private individuals or foundations, according to Philip Pinto, associate professor in the Department of Astronomy and Steward Observatory.

"By going to a bigger telescope, you can see fainter things and see more detail," he said, "and today we are in a situation where the desire of ground-based astronomers to see deeper and more sharply is outstripping the government's willingness ability to support such large projects. The Giant Magellan Telescope is the continuation of this long tradition of privately funded large facilities in astronomy, and Mr. Caris is helping us to meet our share of the obligation."

The Caris gift is in support of the UA's $60 million commitment to the GMT project, which will ensure that UA astronomers will have access to valuable observing time on the landmark telescope, scheduled to be completed in 2021.

"It is extremely important to be one of the partners in one of these big telescope projects," Zaritsky said. "Our goal of a 12 percent share in the telescope will provide as much access to UA faculty and students as any institution partnered in any of the next generation of giant telescopes, making us extremely attractive as the home institution of leading researchers and students in the future."

Richard Caris is the founder and chairman of Interface Inc. A high-tech company in Scottsdale, Arizona, Interface is a world leader in load cell force measurement applications, including the custom mirror-cell support systems in telescopes that the UA has helped construct, such as the Large Binocular Telescope on Mount Graham in southeastern Arizona.

For more than 10 years, Caris has been involved with the Arizona Astronomy Board, an advisory and philanthropic support panel for the Department of Astronomy and Steward Observatory. He previously gave more than $2 million to fund the primary/tertiary mirror for the Large Synoptic Survey Telescope that also will be built in Chile, and through the UA Foundation he has given to the Mount Lemmon SkyCenter and the UA Sky School.

"Higher education and the advancement of science are deeply important to Richard," said Sid Leach, a personal friend of Caris' and chairman of the Arizona Astronomy Board. "When Richard was young, he was inspired by the philanthropy of people who had gone before. He would be very pleased if he in turn inspires someone else in the future to likewise pursue philanthropy in support of science and higher education."

The GMT is designed to observe for more than 50 years and will help answer some of humanity’s most fundamental questions, including whether life exists on other planets and how the universe began. Astronomers also will use it to better understand how planets and galaxies form and to help find answers to the mysteries of dark matter and dark energy.

Through its Arizona NOW campaign, the University of Arizona Foundation has raised more than $1 billion toward a $1.5 billion goal. Caris’ gift for the GMT supports all of the campaign’s key initiatives, including academic research, student engagement and expansion of the UA’s global impact.

"It takes a special person to build a global company and then apply that same scale to his philanthropy," said James H. Moore Jr., president and CEO of the foundation. "Mr. Caris may be supporting the Department of Astronomy at the UA, but his influence on big science, and the exploration of our universe, stretches well beyond our University’s boundaries."

In recognition of the gift, the UA’s mirror lab, which provides all of the GMT's primary mirrors, will be renamed the Richard F. Caris Mirror Lab. The mirror lab was founded and grown during 37 years of leadership by the former director of Steward Observatory, Peter Strittmatter.

Under the leadership of its director, UA Regents' Professor Roger P. Angel, the mirror lab has earned worldwide recognition for producing giant, lightweight mirrors of unprecedented power for a new generation of optical and infrared telescopes. Without the continued advancements made through the mirror lab, groundbreaking projects such as the Large Binocular Telescope, the largest ground telescope currently in existence, would not have been possible.

Students have played an integral role in the accomplishments of the mirror lab, often pushing the envelope of what was deemed possible.

"Our graduate students, especially from the College of Optical Sciences, have been essential to us," said Buddy Martin, project scientist at the mirror lab. "Working with us gives them real-world manufacturing experience, and it gives us the novel measuring techniques that we need to test and evaluate those mirrors that we make that nobody has designed or made before."

Joaquin Ruiz, dean of the UA College of Science, said: "The mirror lab is unquestionably one of the innovation jewels of our University. The lab is known around the world for creating the largest mirrors for astronomical use. It is fitting that it will now have the name of Richard F. Caris Mirror Lab, as Mr. Caris is also an innovator with a very successful company in our state."

Said Pinto: "There still is huge space for discovery in the universe. Personally, I expect some big surprises when we finally have GMT operational. I'm excited and can't wait to get it on the sky."