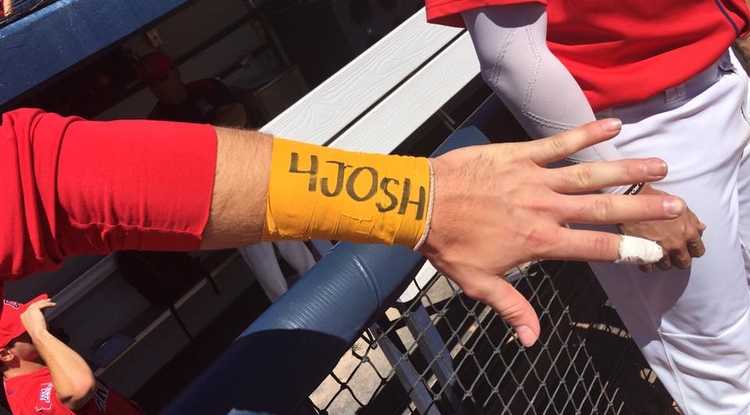 The Wildcats' gold tape pays tribute to Josh Knight, a young fan who died of cancer before the season. Gold is the color for childhood cancer.

Teenager Josh Knight, a fan of the baseball team, died of cancer before the season began, but the Wildcats haven't forgotten about him in their improbable march to the NCAA championships in Omaha, Nebraska.
University Relations – Communications
June 17, 2016
Resources for the Media

The University of Arizona baseball team is missing a key person at the College World Series, but he is with them in spirit.

Josh Knight, a fan of the team, was first introduced to the Wildcats when he was diagnosed with gliosarcoma, which is essentially a tumor in the brain. This rare type of tumor is generally found in adults between the ages of 40 and 60, so it was unusual for it to be found in a teenager.

The team spent time with Knight, who frequently made it out to practices and games to cheer them on and hang out in the clubhouse. The fact that he was only a couple of years younger than some of the Wildcats made the players realize how fortunate they were to be able to play the game of baseball.

This spring, the team showed its support of Knight by affiliating with the Vs. Cancer Foundation, raising money for childhood cancer efforts. Chase Jones, founder and CEO of the foundation, was diagnosed with a stage 4 brain tumor at 18 while playing baseball for the University of North Carolina.

"It is such an achievement for any college baseball team to make it to Omaha," Jones said, "but an even greater accomplishment having done so the way that Arizona has: as committed to giving back to childhood cancer efforts and Josh as to success on the field. They prove the correlation in giving back and experiencing success because of it, and Vs. Cancer is forever grateful for the entire program's selflessness."

Only days before the season began, the team received the news that Knight had died at age 17.

"Do It 4Josh" became the team's motto for 2016. Knight's father threw out the ceremonial first pitch before a March 26 home game against UCLA, and the team honored Knight with a tribute video — produced by UA outfielder Sawyer Gieseke — that was played on the video board at Hi Corbett Field.

Half of the funds raised by the team went toward cancer research, and the other half went to local childhood cancer programs at Banner Children’s — Diamond Children's Medical Center.

"Josh was a very special kid with an unbelievable personality that was just infectious to be around," said Jimmy Van Ostrand, the Wildcats' director of player development.