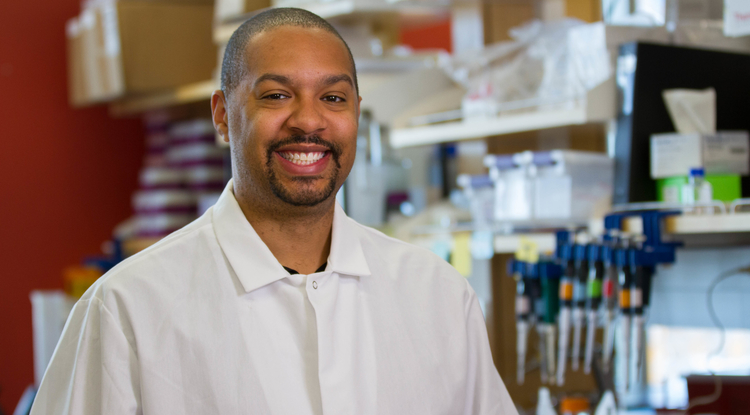 Michael Johnson: "If you think something, know why you think that — and be willing to learn."

In the Age of Social Media, He's a New Kind of Scientist

What does it mean to be a scientist? Far more than doing research in a lab, says Michael Johnson, whose unconventional passage into the field began with a bowling championship and a music degree.
Emily Litvack
,
UA Research, Discovery & Innovation
June 23, 2017
Resources for the Media
Extra Info:

Keep up with Michael Johnson on Twitter at @blacksciblog.

"Think of it basically like a cheeseburger," says Michael Johnson. He's talking about the enzyme ribonucleoside-diphosphate reductase.

Johnson starts a lot of his sentences with a variation of "Think of it basically like." He'll say "It's kind of like," or "I'll put it this way" — "this way" being the way you'll understand it. Enzymes are like cheeseburgers. Scientific grant funding is like baseball. The innate immune system is like an army.

Johnson is an assistant professor in the Department of Immunobiology and a member of the BIO5 Institute at the University of Arizona, and he really, really wants you to get it.

In the case of his own research, "it" is that copper has been toxic to bacteria for as long as the two have been on Earth together, and there may be a way to harness its antibacterial prowess in therapeutics that kill off disease-causing bacteria. Strains of bacteria such as Streptococcus pneumoniae and Staphylococcus aureus, for example, cause all kinds of unpleasantries: ear infections, pneumonia, MRSA. The human body needs time, a healthy immune system and, often, antibiotics to fight them off.

Bacteria are getting better and better at resisting the effects of our manmade antibiotics by the day, but put them in a copper pot and they die off. Copper is no less toxic to S. pneumoniae than it was thousands of years ago.

So here, in the Copper State of Arizona, Johnson studies how exactly copper has this effect on bacteria, and how scientists can use it to fight disease. Johnson's research in copper toxicity, he will tell you, is just one part of his identity as a scientist.

"I want my scientific tombstone to read, 'Here lies Michael Johnson. He was a loving father and husband, a great mentor, a champion for science, and he changed the way we treat bacterial infections for the better.' The order that I put that is the most important part."

Johnson was born in Chicago. He is the only child of a single mother. Throughout his childhood, his mother worked as a nurse, taught nursing at a local community college and "kept me insanely busy," he adds with a laugh.

"She was very supportive and gave me a background of confidence. She sacrificed a lot so I could have opportunity."

Opportunity was seized. Johnson played baseball in the sixth grade, but he also learned music. He proudly holds a 1999 Chicago Public High School bowling championship. He played three-on-three basketball with his jazz hero, Wynton Marsalis. He and his high school drum team played backup at a Shania Twain concert, where Johnson dropped a drumstick but continued playing with the one he had left.

As he tells these stories, he is animated. The sunglasses resting on his head bounce as he bellows with laughter. He motions with his hands.

Now he pauses for a breath and takes a gulp of hibiscus lemonade. His expression becomes earnest. His voice is soft and his hands rest on the table.

"Growing up in Chicago in the 1980s and 1990s gave me perspective," he says. "Navigating those streets, particularly at that time, was dangerous. It made me empathetic to the struggles of others, while also able to not emotionally consume it all."

Since those days on Chicago's South Side, Johnson has indeed kept busy.

In the early 2000s, he graduated from Duke University with an undergraduate degree in music, where he developed an appreciation for big-band jazz (a la Dizzy Gillespie), the Lincoln Center Jazz Orchestra and Oliver Nelson. He earned a Ph.D. in biochemistry and biophysics from the University of North Carolina, Chapel Hill, a remarkable story about which he writes in lucid detail on his blog. He married his wife, Elisha. They have two daughters who are now 8 and 5 years old. And last year, Johnson joined the faculty in the UA's Department of Immunobiology.

To Johnson, communicating his work is just as important as the work itself.

His affinity for outreach began in 2007, when he was a graduate student at UNC and participated in an early iteration of North Carolina DNA Day. The concept was simple: UNC graduate students and postdocs would visit local schools and teach children about DNA by having them purify a sample of their own. Today, more than 300 high school classrooms participate in DNA Day. Later, as a postdoc at St. Jude Children's Research Hospital, Johnson became an outreach chair and brought DNA Day with him. Johnson also began hosting a podcast, Science Sound Bites, geared toward giving middle and high school STEM teachers and students real-world examples of science in action.

In mid-2013, Johnson received an email from a friend that included a link to an article about the microbiome. The friend was interested in Johnson's professional assessment. Describing this moment, Johnson stretches his arms forward, laces his fingers together and pops his knuckles. Then he pecks away at an imaginary keyboard. He typed a lengthy reply, explaining the science behind the story in layman's terms.

In response, his friend told him he should start a blog. So he did, and now he's as prolific as he is adept. He blogs. He tweets. He vlogs. He routinely answers questions not only about his research but about the scientific process itself.

He even wrote a blog post titled "What exactly does a scientist do all day anyway???"

"It's not about knowing these specific, complicated concepts in science," Johnson says. "It's about learning the fundamentals of the scientific process itself. If you think something, know why you think that — and be willing to learn. That's really all I want to teach people, and I'm glad to have the opportunity."