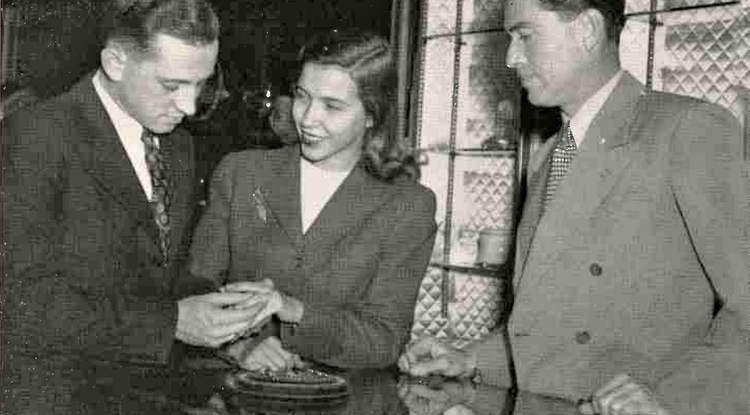 Donald, left, and Luda Soldwedel appeared in a jewelry store ad that ran in the UA yearbook.

Four endowed funds bearing their names will permanently support endeavors and students in the College of Humanities Writing Skills Improvement Program, the School of Journalism, the Eller College of Management and UA Health Sciences.
Katy Smith
,
UA Foundation
Oct. 3, 2016
Resources for the Media 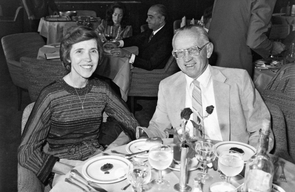 The Soldwedels during a Mediterranean cruise they took in the early 1980s.

Donald and Lou Edith "Luda" Soldwedel, members of the Class of 1946 and longtime friends of the University of Arizona, will continue to have an impact on their alma mater for years to come through planned gifts to the UA.

Luda was sent from Illinois to Tucson at the age of 8 for health reasons and remembered the UA as the place where she found community after a childhood spent away from family. For Donald, the UA provided sound preparation for a career in which he owned and operated Western Newspapers Inc., a chain of Arizona news media outlets.

The couple moved to Yuma following their graduations but never left their alma mater behind, consistently giving to the UA financially and through volunteer leadership. The Soldwedels established the UA Writing Center through a grant, and Donald is credited as a dominant force in saving the journalism program from closure in the 1990s.

After Luda passed away in April, about eight years after her husband, the UA received planned gifts from the couple totaling $1.3 million. Four endowed funds bearing their names will permanently support endeavors and students in the College of Humanities Writing Skills Improvement Program, the School of Journalism, the Eller College of Management and UA Health Sciences. A fifth endowed fund will provide money for an Arizona Athletics scholarship. A leader in each program area will determine optimal uses for the funds, allowing the UA to respond as needs change and opportunities emerge.

"Their years at the UA were such happy ones, and it was important to them to give others that opportunity," said the Soldwedels' daughter, Ann Buxie.

"The Soldwedels' transformative generosity has helped shape a wonderful learning experience for so many UA students, and I know that this gift will continue that incredible legacy at the University," said UA President Ann Weaver Hart. "The programs that they have chosen to endow are all critical areas of learning and inquiry, and I am grateful to the Soldwedels and their family for this support."

That sentiment was echoed by Charles Cairns, dean of the UA College of Medicine – Tucson. "Their foresight in designating this unrestricted endowment to the University of Arizona Health Sciences gives us the flexibility to take advantage of new technologies, scientific advances and medical breakthroughs that will shape the future of medicine," he said.

At the School of Journalism, the Soldwedels' gift will "foster a cutting-edge education for the next generation of journalists," said Jacqueline Sharkey, former director of the school. "Don and Luda were visionaries. They set an example for all of us about the power of thoughtful giving."

The Soldwedels' gifts put the UA closer to its goal of raising $1.5 billion during Arizona NOW, the comprehensive fundraising campaign distinguished by its unprecedented scope and focus on improving the prospects and enriching the lives of the people of Arizona and the world. The gifts also contribute to the campaign priority of building the UA's financial foundation with endowed funds, which benefit the UA in perpetuity. The payout from an endowment fulfills a donor's wishes to support students, faculty or programs year after year.

After her mother's memorial service, Buxie recalled, UA President Emeritus Henry Koffler asked her, "Do you know how fortunate you were to have them as parents?"

She does know that. And she also knows that her parents' generosity will have a powerful effect on future generations.