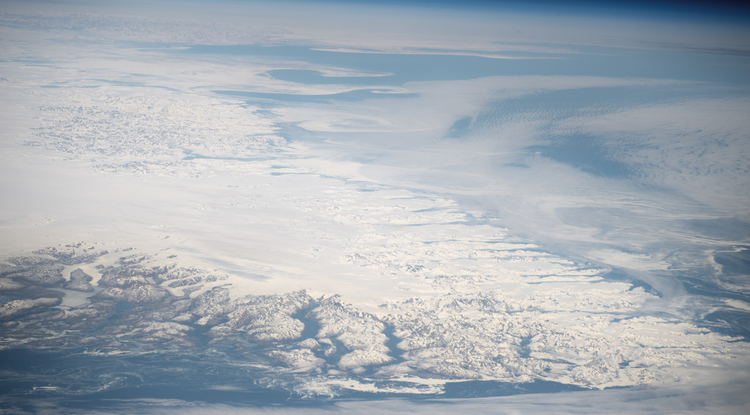 Taken from the International Space Station in 2016, this picture of the southern tip of Greenland shows the island’s vast ice sheet fringed by glacier-carved fjords. If all Greenland’s ice melted, sea levels would rise by about 7 meters (23 feet). (Photo: NASA)

Analysis to Figure Out How Fast Greenland Is Melting

New UA research provides the best assessment of Greenland’s past temperatures, and knowing about the past is crucial for projecting the future of Greenland’s vast ice sheet.
Mari N. Jensen
,
UA College of Science
July 6, 2017
Resources for the Media 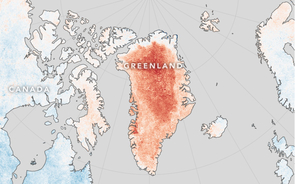 The redder the area on this map of Greenland, the more days that site was warmer in April 2016 than the average of April temperatures from 2001 to 2010. (Credit: Jesse Allen/NASA Earth Observatory)

A new analysis of Greenland's past temperatures will help scientists figure out how fast the island's vast ice sheet is melting, according to a new report from University of Arizona atmospheric scientists.

The ice sheet has been shrinking since 1900 and the yearly loss of ice has doubled since 2003, other researchers have shown. The accelerated melting of the Greenland ice sheet is contributing to sea level rise.

The glaciers and ice sheet of Greenland cover a land area greater than the European countries of Germany, France, Spain and Italy combined. If all Greenland's ice melted, sea levels would rise by about 7 meters (23 feet).

Figuring out how fast the island's ice has melted and will melt in the future requires knowing the past and the present surface air temperatures, according to UA researchers J. E. Jack Reeves Eyre and Xubin Zeng.

"Greenland is particularly important to global climate change because it has the potential to cause a big change in sea level," lead author Reeves Eyre said. "Knowing how it's going to change over the next century is important."

Calculating an average yearly surface temperature for the whole of Greenland is difficult. During most of the 20th century, the only weather stations were along the coast. There was no network of weather stations in Greenland's interior until 1995.

Other groups of researchers have used combinations of weather station readings, satellite remote sensing data, statistical analyses and climate models to calculate the island's annual surface temperatures back to 1901. However, the results of those analyses disagree with one another substantially.

How Greenland's massive ice sheet will respond to future warming is not well understood, said Zeng, a UA professor of hydrology and atmospheric sciences.

By combining the best two of the previous analyses, the UA study provides the most accurate estimates of Greenland’s 20th-century temperatures, said Reeves Eyre, a doctoral student in the UA Department of Hydrology and Atmospheric Sciences.

The finding will help improve climate models so they more accurately project future global climate change and its effects.

"That's why we look at the historical period — it's not about the history, it's about the future," said Zeng, who holds the Agnese N. Haury Endowed Chair in Environment.

NASA, the U.S. Department of Energy and the UA Agnese Nelms Haury Program in Environment and Social Justice funded the research.

Knowing Greenland's past temperatures is important for improving climate models, because scientists test regional and global climate models by seeing how well they predict what the climate was in the past.

Previous analyses of the island's past temperatures came up with contradictory results: Some said the 1930s were warmer than present, while other analyses said the opposite.

"We are the first to bring all those datasets together," Zeng said.

Above 1,500 meters, the ice generally does not melt and may even gain mass, he said. However, the bit of ice gained at the highest elevations does not offset the loss of ice at the lower elevations.

The UA study resolves the discrepancies among the other analyses and provides the best estimates of Greenland's past temperatures.

"The combination of the MERRA2 and GISTEMP (analyses) gives the most accurate results over the 20th century," Reeves Eyre said. "Putting them together is more than the sum of the parts. Neither of them individually can do what both of them together can do."

Although some previous analyses suggest the 1930s were warmer than it is now, the UA analysis shows that current temperatures are warmer than the 1930s. The long-term trend for Greenland's ice sheet appears to be for ever-higher surface temperatures, he said.

"By studying a wide range of available data and combining two of the best data sources, we've come up with a combination that best represents the whole distribution of temperatures over Greenland from 1880 to 2016," Reeves Eyre said. "Using this dataset is the best way to evaluate climate models and their projection of temperature change over Greenland."