A wood engraving by Eduard Riou depicts a landscape view of the Pliocene. The image was etched in the late 1800s, when CO2 levels hovered around 295 ppm. (Image: Welcome Library/CC BY 4.0)

Temperature data inferred from plankton fossils from the Pliocene, an era with CO2 levels similar to today's, allowed a UA-led team to rectify discrepancies between climate models and other proxy temperature measurements.
Mikayla Mace
,
University Communications
July 29, 2019
Resources for the Media 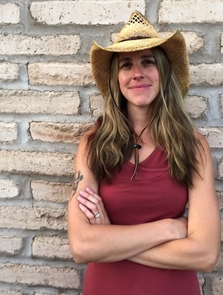 The Mauna Loa Observatory in Hawai’i recently recorded the highest concentration of carbon dioxide levels in human history. In fact, the last time CO2 levels surpassed 400 parts per million was during the Pliocene, a geological epoch between two and five million years ago, when oceans surged 50 feet higher and small icecaps barely clung to the poles.

“The Pliocene wasn’t a world that humans and our ancestors were a part of,” said University of Arizona associate professor of geosciences Jessica Tierney. “We just started to evolve at the end of it.”

Now that we’ve reached 415 parts per million CO2, Tierney thinks the Pliocene can be used to understand the climate shifts of the very near future. Past studies attempted this, but a nagging discrepancy between climate models and fossil data from that part of Earth's history muddled any potential insights.

A new study, published today in Geophysical Research Letters, used a different, more reliable type of fossil data than past studies. Tierney is the lead on the study, which resolved the discrepancy between fossil data and climate model simulations and showed that, yes, the Pliocene is a good analog for future climate predictions.

Before the industrial revolution, CO2 levels hovered around 280 ppm. For perspective, it took over two million years for CO2 levels to naturally decline from 400 ppm to pre-industrial levels. In just over 150 years, humanity has caused those levels to rebound.

Past proxy measurements of Pliocene sea surface temperatures led scientists to conclude that a warmer Earth caused the tropical Pacific Ocean to be stuck in an equatorial weather pattern called El Niño.

Normally, as the trade winds sweep across the warm surface waters of the Pacific Ocean from east to west, warm water piles up in the eastern Pacific, cooling the western side of the ocean by about 7 to 9 degrees Fahrenheit. But during an El Niño, the temperature difference between the east and west drops to just under 2 degrees, influencing weather patterns around the world, including Southern Arizona. El Niños typically occur about every three to seven years, Tierney said.

The problem is, climate models of the Pliocene, which included CO2 levels of 400 ppm, couldn’t seem to simulate a permanent El Niño without making funky, unrealistic changes to model conditions.

“This paper was designed to revisit that concept of the permanent El Niño and see if it really holds up against a reanalysis of the data,” she said. “We find it doesn’t hold up.”

About 20 years ago, scientists found they could deduce past temperatures based on chemical analysis of a specific kind of fossilized shell of a type of plankton called foraminifera.

“We don’t have thermometers that can go to the Pliocene, so we have to use proxy data instead,” Tierney said.

Since then, scientists have learned that foraminifera measurements can be skewed by ocean chemistry, so Tierney and her team instead used a different proxy measurement – the fat produced by another plankton called coccolithophores. When the environment is warm, coccolithophores produce a slightly different kind of fat than when it’s cold, and paleoclimatologists like Tierney can read the changes in the fat, preserved in ocean sediments, to deduce sea-surface temperatures.

“This is a really commonly used and reliable way to look at past temperatures, so a lot of people have made these measurements in the Pliocene. We have data from all over the world,” she said. “Now we use this fat thermometer that we know doesn’t have complications, and we’re sure we can get a cleaner result.”

Tierney and her team found that the temperature difference between the eastern and western sides of the Pacific did decrease, but it was not pronounced enough to qualify as a full-fledged permanent El Niño.

“We didn’t have a permanent El Niño, so that was a bit of an extreme interpretation of what happened,” she said. “But there is a reduction in the east-west difference – that’s still true.”

The eastern Pacific got warmer than the western, which caused the trade winds to slacken and changed precipitation patterns. Dry places like Peru and Arizona might have been wetter. These results from the Pliocene agree with what future climate models have predicted, as a result of CO2 levels reaching 400 ppm.

This is promising because now the proxy data matches the Pliocene climate models. “It all checks out,” Tierney said.

The Pliocene, however, was during a time in Earth’s history when the climate was slowly cooling. Today, the climate is getting hotter very quickly. Can we really expect a similar climate?

“The reason today sea levels and ice sheets don’t quite match the climate of the Pliocene is because it takes time for ice sheets to melt,” Tierney said. “However, the changes in the atmosphere that happen in response to CO2 – like the changes in the trade winds and rainfall patterns – can definitely occur within the span of a human life.”