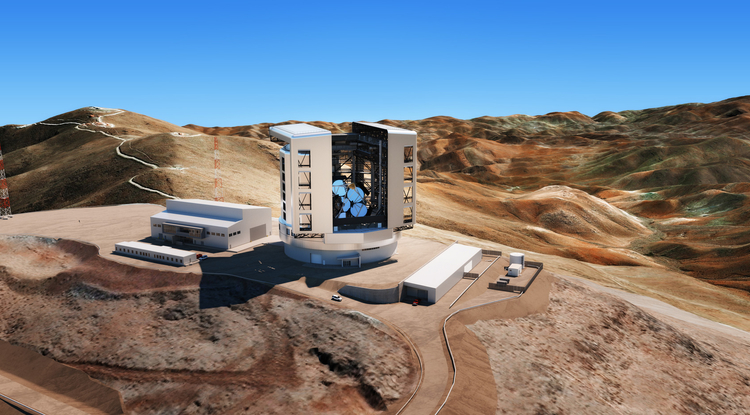 The latest design of the enclosure, telescope and site at Las Campanas Observatory in Chile. (Image: M3 Engineering)

The University of Arizona is part of an international consortium of leading universities and science institutions that is developing the Giant Magellan Telescope. GMTO Corp. manages the project on behalf of its founders.

An anonymous donor has made a $1 million gift so that University of Arizona students and faculty can have more time using the Giant Magellan Telescope when it's completed and begins operations at its home in Chile's Atacama Desert.

The GMT is a next-generation, ground-based telescope that promises to revolutionize our understanding and view of the universe. The GMT is poised to enable breakthrough discoveries in cosmology, the study of black holes, dark matter, dark energy, and the search for life beyond our solar system. It will be the world's largest telescope, with 10 times the resolving power of the Hubble Space Telescope.

Funding for the project comes from the partner institutions, governments and private donors. Each institution's share of observation time will be tied to its financial stake. Of the $60 million UArizona has contributed to date, more than $25 million originated from philanthropic gifts, said Buell Jannuzi, head of the Department of Astronomy and director of Steward Observatory.

"Philanthropy is of huge importance to this project. I'm profoundly grateful that this donor is expressing confidence we will put the funds to good use," said Jannuzi, who also serves on the board of directors of GMTO Corp., the organization managing development of the GMT.

The donor, a UArizona graduate, wanted to make a gift to a project with lasting impact and that joins the university with other institutions in a high-priority collaboration, said Elliott Cheu, interim dean of the College of Science.

"The GMT will open up the field of astronomy to discoveries that scientists have dreamed about for many years. We are proud to be part of an elite group of institutions that are helping to create such a magnificent instrument," Cheu said.

The telescope's primary mirror segments are being fabricated at the Richard F. Caris Mirror Lab, which is part of Steward Observatory, a research unit of the UArizona College of Science. Regents' Professor Roger Angel, who founded and directs the lab, contributed to the concept and design of the GMT, together with many other scientists and engineers in the College of Science and the James C. Wyant College of Optical Sciences.

The University of Arizona is poised to build on our deeply impressive history in the space sciences through our GMT involvement," said University of Arizona President Robert C. Robbins. "This gift of observation time is incredibly valuable, and I know no one could put it to better use than our students and faculty."

While it's difficult to predict what discoveries will be made using the GMT over its lifespan of 50 years or more, Jannuzi said, UArizona astronomers will begin with two major focus areas: exoplanets and the early history of the universe.

They'll use the GMT's advanced optics and largest-ever mirrors to search for signs of life on exoplanets, which orbit stars other than the sun. The GMT's ability to observe at high spatial resolution is critical to enabling the study of faint planets close to their intrinsically bright host stars, he said.

Large mirrors serve an important purpose – they improve the viewer's ability to resolve fine details in the observed region of the sky. The larger the main mirror of a telescope, the more light it can collect from an astronomical source, which means more information when the light is analyzed.

The GMT's superior light-gathering and resolving abilities also make it a powerful tool for studying the time when the first stars were formed, close to 13 billion years ago, or just a few hundred million years after the Big Bang, Jannuzi said.