Featuring a primary mirror 32 inches in diameter, the new Schulman telescope forms the centerpiece of the SkyCenter's successful public outreach programs drawing visitors from all over the country to the clear skies atop Mt. Lemmon.
Daniel Stolte
,
University Communications
Oct. 22, 2010
Resources for the Media
Extra Info:

For more information or to purchase tickets online visit www.skycenter.arizona.edu or call 520-626-8122. 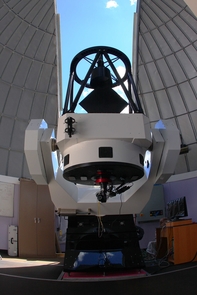 Spectacular close-up views of Jupiter's Great Red Spot, star clusters, nebulae and distant galaxies captivated the first Mt. Lemmon SkyCenter visitors to peer through a brand-new telescope, the largest of its kind in the state.

Weighing in at more than 5,000 pounds and standing 12 feet tall, the new 32-inch Schulman telescope is safe and easy to use for public programs and delivers digital images of exceptional quality. The telescope's more precise aiming mechanism and larger aperture of the compared to the existing 24-inch public viewing telescope will go far in maintaining the SkyCenter's preeminence in public outreach programs.

Under the guidance of Adam Block, the SkyCenter's primary presenter and astrophotographer, visitors have generated pictures that are published in books, websites such as NASA's Astronomy Picture of the Day and magazines, including Sky & Telescope. Visitors who participate in the SkyNights program and look through the telescope are rewarded with brighter looking stars and better contrast in deep space objects when compared to smaller telescopes.

"Shortly after aligning the telescope and turning on its control systems, I was pleasantly surprised to find that the telescope pointed to celestial objects with great precision – without further adjustment," Block said. "This speaks to the high quality of the mount, the most important part of the telescope, and allows me to show dramatic views of stars and planets during the day time even before sunset."

Eventually this telescope will work with both on-site and remote operators – dramatically increasing accessibility for the public and serious amateurs. SkyCenter has remote feed capability via Internet and will continue to promote collaborative programs with other UAScience venues such as Biosphere 2 and Flandrau – giving a taste of mountaintop observing to those not on the summit and whetting their appetites for a visit to Mt. Lemmon SkyCenter, Tucson's highest destination.

Echoing the tremendously positive feedback that Block and his team at the SkyCenter receive from the participants in their programs, one visitor said: "It looked like rain, and we didn't even think we would see the stars, but later the sky did clear and the evening sky Block presented to us blew my mind. I kept sneaking back to the end of the line to get extra glimpses. I think my life has been changed because of the presentation."

The Joe and Dixie Schulman Foundation, along with a generous gift from Richard Caris, made possible the acquisition of the 32-inch Schulman Telescope.

"We are extremely grateful for the vision and generosity of our donors," said Anna Spitz, program manager with the Mt. Lemmon Sky Center. "They have continuously supported the SkyCenter's mission and the donation of this telescope makes possible the centerpiece program of the summit educational programs."

The Mt. Lemmon SkyCenter public programs now feature viewing with the new 32-inch Schulman telescope and many opportunities for special and collaborative events. Along with established SkyNights, SkyTours and AstronomerNights programs, SkyCenter's public observing program will offer special programs, including the popular Our Place in the Universe and special viewings of the Geminids meteor shower on Dec. 13 and the winter solstice and total lunar eclipse on Dec. 21. SkyCenter is also highlighting NASA's Year of the Solar System by tying into many NASA themes and mission events.

The Schulman Telescope was installed in only five days in September by the UA Steward Observatory Mountain Operations, RC Optical Systems and Mt. Lemmon SkyCenter staff.