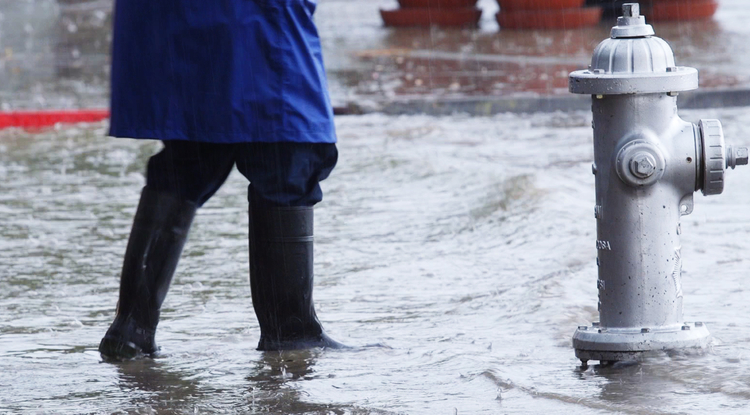 Last July — one of the wettest months on record in Tucson — produced more than six inches of rain. That included one spell in which the city received two inches in less than a week. (Photo: Bob Demers/UANews)

Our stormy season officially starts on Friday, but India's version already is underway and has caused torrential downpours and massive flooding.
Martha Retallick
,
University Communications
June 13, 2018
Resources for the Media
A boat seemed more appropriate at the UA's Main Gate on this day during the 2016 monsoon season. (Photo: Bob Demers/UANews)

For years, Arizona's summer stormy season wasn't regarded as a full-fledged monsoon. If you wanted to experience the real deal, you had to go to India.

By any measure, the Indian summer monsoon is impressive. Depending on where you are, the total rainfall can be tallied in feet, not inches. Officially, it starts on June 1, but this year's edition jumped the gun and began on May 29, causing torrential downpours and massive flooding in the southern state of Kerala. The storms wreaked similar havoc in India's largest city, Mumbai.

Jokingly referred to as "the real finance minister of India," the monsoon provides 80 percent of the nation's annual rainfall, which is vital for the 850 million people who depend on farming. Collectively, farmers account for nearly 20 percent of India’s GDP.

The Science Behind Monsoons

Monsoons are triggered by differences in how the sun heats landmasses and large bodies of water. In Asia, it's the Indian subcontinent, which warms faster than the Indian Ocean. The hot, dry land creates low-pressure zones, and they cause winds to shift and draw moist air into the region. A typical summer monsoon takes about a month and a half to cover all of India. It also brings rain to Bangladesh, Bhutan, Nepal, Pakistan and Sri Lanka.

In the American Southwest, the Pacific Ocean serves as the moisture source for our monsoon storms. The first sign that the winds have shifted and the monsoons are approaching? Higher humidity, which we already have.

Are they really monsoon storms?

According to Michael Crimmins, a climate science extension specialist and associate professor in the University of Arizona's Department of Soil, Water and Environmental Science, they are.

"They're not as pronounced as India's, but we do indeed have a monsoonal circulation," Crimmins says.

Why Our Monsoon Matters

How does this year's monsoon season look? The National Weather Service and the National Oceanic and Atmospheric Administration's Climate Prediction Center are calling for above-average rainfall and warmer-than-average temperatures.

"It's a pretty gutsy forecast," Crimmins says, adding that the monsoon is notoriously hard to predict.

Take, for example, last year. The 2017 forecast noted equal chances for above- or below-average rainfall. Then came July — one of the wettest months on record — with more than six inches of rain. That included one spell in which Tucson got two inches in less than a week. The August 2017 rainfall totals were in the 1.5-inch range, and we've had very little since then.

In short, there's a lot riding on this year's monsoon. The summer storms provide up to half of our annual rainfall — or about six inches of the Tucson area's expected annual total of 12. A robust monsoon also will replenish our local water table, providing much-needed nourishment to vegetation that feeds and cools us, and alleviate the drought conditions that have persisted for years.

If your drought-parched garden includes a rain gauge, it's time to put it to work. With the first monsoon storms imminent, the UA's Rainlog network needs volunteer citizen scientists to record and report rainfall in Arizona and surrounding states.

You can register your gauge and its location by going to Rainlog.org and signing up for a free account. If you don't have a rain gauge, you can buy one at a hardware store or home center, or shop online. A good one will run between $10 and $30. Just make sure that your gauge can record at least six inches of rain (yes, we can get that much during a single storm).

After the rain ends and it's OK to go outside, note the amount of rainfall, then log into the Rainlog site to report your data. Your report, combined with those from other network members, is displayed on the Rainlog.org home page. Use the home page's plus (+) and minus (-) icons to zoom into specific areas.

You've probably heard the stories about Arizona rainfall being so variable that one side of town is flooding while your place stays bone dry. There's more than a little truth to these tales, especially during the monsoon season. Our summer rains can be highly localized.

Add to this the fact that Arizona's official rain gauge network has large gaps. By filling in these gaps, Rainlog volunteers provide data that is used for a variety of applications, from watershed management activities and weather reporting, to hydrologic research and drought planning at local, county and state levels.

According to Crimmins, the program's coordinator, there are approximately 2,000 Rainloggers. Most are in Arizona, with the majority in the Phoenix and Tucson areas, but there are some in Colorado, Nevada, New Mexico and Utah.

Rainloggers are "really important to drought monitoring," Crimmins says. "They fill in where there are no official measurements."

Although most Rainloggers are waiting for the first drops of monsoon rain, Crimmins says there are about 100 volunteers who report daily. In Arizona's high country, Rainloggers also report snowfall. This can be done with a yardstick used to measure depth, or by bringing the rain gauge indoors to allow the snow to melt and then taking a moisture reading.