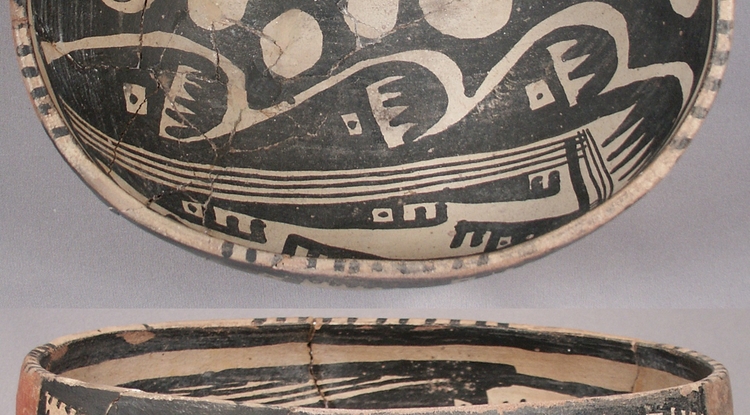 Researchers analyzed thousands of artifacts like this Salado polychrome ceramic bowl to learn about social networks in the pre-Hispanic Southwest between A.D. 1200 and 1450.

Artifacts Shed Light on Social Networks of the Past

Researchers studied thousands of ceramic and obsidian artifacts from A.D. 1200-1450 to learn about the growth, collapse and change of social networks in the late pre-Hispanic Southwest.
Alexis Blue
,
University Communications
March 25, 2013
Resources for the Media

An article published this week in the Proceedings of the National Academy of Sciences sheds light on the transformation of social networks in the late pre-Hispanic American Southwest and shows that people of that period were able to maintain surprisingly long-distance relationships with nothing more than their feet to connect them.

Led by University of Arizona anthropologist Barbara Mills, the study is based on analysis of more than 800,000 painted ceramic and more than 4,800 obsidian artifacts dating from A.D. 1200-1450, uncovered from more than 700 sites in the western Southwest, in what is now Arizona and western New Mexico.

With funding from the National Science Foundation, Mills, director of the UA School of Anthropology, worked with collaborators at Archeology Southwest in Tucson to compile a database of more than 4.3 million ceramic artifacts and more than 4,800 obsidian artifacts, from which they drew for the study.

They then applied formal social network analysis to see what material culture could teach them about how social networks shifted and evolved during a period that saw large-scale demographic changes, including long-distance migration and coalescence of populations into large villages.

"Network scientists often talk about how increasingly connected networks become, or the 'small world' effect, but our study shows that this isn't always the case," said Mills, who led the study with co-principal investigator and UA alumnus Jeffery Clark, of Archaeology Southwest.

"Our long-term study shows that there are cycles of growth and collapse in social networks when we look at them over centuries," Mills said. "Highly connected worlds can become highly fragmented."

Another important finding was that early social networks do not appear to have been as restricted as expected by settlements' physical distance from one another. Researchers found that similar types of painted pottery were being created and used in villages as far as 250 kilometers apart, suggesting people were maintaining relationships across relatively large geographic expanses, despite the only mode of transportation being walking.

"They were making, using and discarding very similar kinds of assemblages over these very large spaces, which means that a lot of their daily practices were the same," Mills said. "That doesn't come about by chance; it has to come about by interaction – the kind of interaction where it's not just a simple exchange but where people are learning how to make and how to use and ultimately discard different kinds of pottery."

"That really shocked us, this idea that you can have such long distance connections. In the pre-Hispanic Southwest they had no real vehicles, they had no beasts of burden, so they had to share information by walking," she said.

The application of formal social network analysis – which focuses on the relationships among nodes, such as individuals, household or settlements – is relatively new in the field of archaeology, which has traditionally focused more on specific attributes of those nodes, such as their size or function.

The UA study shows how social network analysis can be applied to a database of material culture to illustrate changes in network structures over time.

"We already knew about demographic changes – where people were living and where migration was happening – but what we didn't know was how that changed social networks," Mills said. "We're so used to looking traditionally at distributions of pottery and other objects based on their occurrence in space, but to see how social relationships are created out of these distributions is what network analysis can help with."

One of Mills's collaborators on the project was Ronald Breiger, renowned network analysis expert and a UA professor of sociology, with affiliations in statistics and government and public policy, who says being able to apply network analysis to archaeology has important implications for his field.

"Barbara (Mills) and her group are pioneers in bringing the social network perspective to archaeology and into ancient societies," said Breiger, who worked with Mills along with collaborators from the UA School of Anthropology; Archaeology Southwest; the University of Wisconsin, Milwaukee; Hendrix College; the University of Colorado, Boulder; the Santa Fe Institute; and Archaeological XRF Laboratory in Albuquerque, N.M.

"What archaeology has to offer for a study of networks is a focus on very long-term dynamics and applications to societies that aren't necessarily Western, so that's broadening to the community of social network researchers," Breiger said. "The coming together of social network and spatial analysis and the use of material objects to talk about culture is very much at the forefront of where I see the field of social network analysis moving."

Going forward, Mills hopes to use the same types of analyses to study even older social networks.

"We have a basis for building on, and we're hoping to get even greater time depth. We'd like to extend it back in time 400 years earlier," she said. "The implications are we can see things at a spatial scale that we've never been able to look at before in a systematic way. It changes our picture of the Southwest."