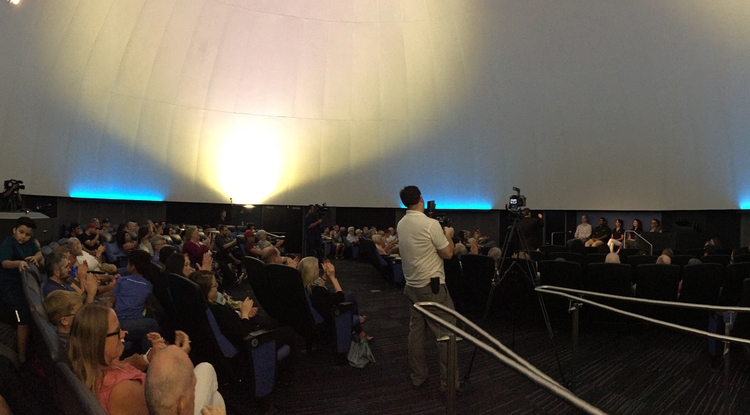 A capacity crowd is on hand at the Flandrau Science Center & Planetarium for the taping of programming for Asteroid Day, which is Friday. (Photo: Daniel Stolte/UANews)

The worldwide Asteroid Day program will begin streaming online at 6 p.m. MST Thursday. The first two hours of the stream will feature the OSIRIS-REx mission and the work to spot asteroids by the Catalina Sky Survey. 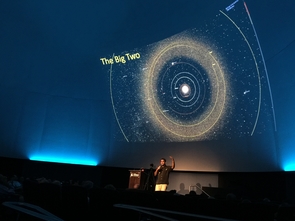 Vishnu Reddy of the Lunar and Planetary Laboratory speaks about the characteristics of asteroids in the asteroid belt. (Photo: Daniel Stolte/UANews)

An all-star lineup of University of Arizona space scientists informed and entertained a full house at the Flandrau Science Center & Planetarium on campus, leveraging the occasion of Asteroid Day to demonstrate that there is far more to be learned than feared from extraterrestrial rocks.

Asteroid Day, which is June 30, is an annual global event held on the anniversary of the 1908 Siberian Tunguska explosion classified as the largest impact event in the Earth's history, widely attributed to an asteroid. This year, a 24-hour broadcast organized by the nation of Luxembourg will mark the occasion, and a two-hour presentation moderated by television host Geoff Notkin was taped for inclusion Tuesday evening at Flandrau. Local interest was such that overflow space was needed in the adjacent Kuiper Space Sciences building.

"Part of the purpose of Asteroid Day is to raise awareness of the possibility of future impacts," said Notkin, a meteorite aficionado from the show "Meteorite Men" who lives in Arizona.

Eric Christensen, director of the Catalina Sky Survey, made the first of five presentations by the UA scientists, mixing in trick questions and even a clip from the movie "The Empire Strikes Back" to make the point that there is little danger of a large asteroid impacting Earth and causing widespread devastation. He likened NASA tasking the Catalina Sky Survey with the search for near-Earth objects to buying insurance. To date, the survey operating out of the UA's Lunar and Planetary Laboratory has discovered more asteroids than any other observatory.

Vishnu Reddy, assistant professor in the Lunar and Planetary Laboratory, said that the 733,000 known asteroids in the main asteroid belt — located roughly between the orbits of Mars and Jupiter — would add up to only 4 percent of the mass of the moon, throwing more water on any "Armageddon" alarmists in the crowd. Reddy introduced the audience to the often-overlooked "small worlds" inhabiting the zoo of bodies in our solar system and pointed out the importance of spacecraft missions such as the Dawn probe, which brought us close-up views of Ceres and Vesta. Dawn's observations revealed these two dwarf planets in the asteroid belt are radically different from each other, providing a glimpse into a diversity of space rocks yet to be uncovered.

Christensen and Reddy were followed by three key players with the UA-led OSIRIS-REx asteroid sample return mission, which launched in September 2016 and is scheduled to bring back 60 grams of dirt from Bennu, a primitive carbonaceous asteroid with stories to tell about how our solar system came to be. Bennu, so the audience learned, potentially could even harbor microdiamonds and other trace materials pre-dating the formation of our sun — in other words, veritable "star dust" spewed into space during supernova explosions that became the seeds for the gas and dust clouds that gave rise to the sun and the planets and ultimately life.

Although the sample return is still years away, in 2023, the spacecraft is on track to arrive at the asteroid in little more than a year.

That's when Daniella DellaGiustina, the image processing lead for the mission, and her team will begin almost two years of mapping to determine an ideal site from which to take the sample, which is expected to hold clues to the origin of our solar system.

Heather Enos, the mission's deputy principal investigator to Dante Lauretta, noted that the mission is hardly challenge-free. Tricky aspects include the navigation of the spacecraft in a microgravity environment, its precise delivery to the asteroid's surface, and the interdependence of the science and spacecraft-operations teams.

Lauretta called the spacecraft "one of the greatest machines in the history of humanity" and told some of his own history with the mission — including seven years of proposals leading up to the selection by NASA in May 2011, only four months before the death of his mentor, Michael Drake.

"It's important to me to share the excitement of the journey," Lauretta told the audience. "We want you to be part of the mission with us."

A short question-and-answer segment involving the five UA scientists produced some of the evening's lighter moments.

"My book on how the universe works is so cool that I don't understand what it says," one boy said in addressing the panel.

Asked about the impact if Bennu were to hit Earth, Lauretta said it would be about 140 megatons — an impact so great that it "would definitely ruin your day," he said.