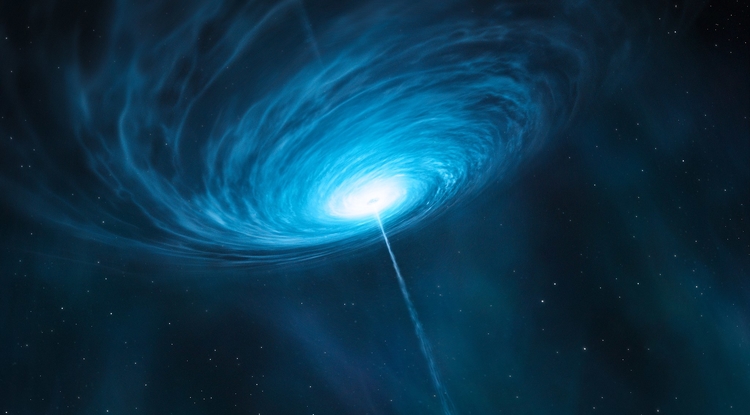 Artist’s impression of the quasar 3C 279, based on observations that included the Submillimeter Telescope, or SMT, in Arizona. Powered by supermassive black holes, quasars are among the brightest objects known. With a mass about one billion times that of the sun, this quasar is so far from Earth that its light has taken more than 5 billion years to reach us. (Image: ESO/M. Kornmesser)

University of Arizona astronomer Peter Behroozi was awarded a Packard Fellowship, which he will use to get to the bottom of a long-standing mystery: How could supermassive black holes grow so big so quickly after the Big Bang?
Daniel Stolte
,
University Communications
Oct. 15, 2019
Resources for the Media 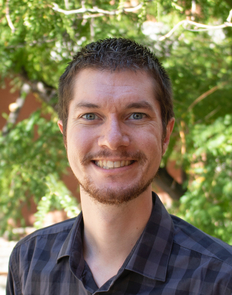 Peter Behroozi is an assistant professor in the Department of Astronomy.

University of Arizona astronomer Peter Behroozi was selected by the David and Lucile Packard Foundation as a Packard Fellow for Science and Engineering, which comes with a grant of $875,000 over five years to pursue research.

This year’s class of fellows features 22 early-career scientists and engineers. The Packard Fellowships in Science and Engineering are among the nation’s largest nongovernmental fellowships, designed to allow maximum flexibility in how the funding is used. Since 1988, the program has supported the blue-sky thinking of scientists and engineers with the belief that their research over time will lead to new discoveries that improve people’s lives and enhance our understanding of the universe.

Behroozi, an assistant professor in the Department of Astronomy and Steward Observatory, says he will use the funds to generate a complete, transformative picture of how supermassive black holes (like those imaged by the Event Horizon Telescope) form in galaxies. He hopes the research could help solve some of the long-standing mysteries surrounding not only black holes, considered to be among the most alien and enigmatic objects in the cosmos, but also about the very fabric of the universe.

"I'm extremely excited because I've been wanting to do this project for quite some time," says Behroozi, whose research group recently made headlines for discovering a powerful new approach for studying galaxy formation that challenges fundamental ideas about how galaxy formation depends on the surrounding dark matter, how galaxies evolve over time and how they give birth to stars.

"We are going to use our experience in creating millions of virtual universes containing thousands of galaxies to generate synthetic universes, this time filled with black holes," Behroozi says. "We will then compare our results to observational data of active, supermassive black holes and quasars at different times as well as to black holes closer to home."

Quasars are some of the most luminous objects known, with some beaming brighter than their host galaxies, across billions of light-years of space. They are believed to be the sites where matter, including entire stars, is being gobbled up by black holes of unimaginable proportions, containing up to tens of billions of times the mass of our sun.

How such cosmic monsters, believed to sit at the center of almost every galaxy in the observable universe, could come into existence when the universe was less than 10% of its current age – a toddler by cosmic standards – still puzzles astrophysicists.

"Even if they all came together very rapidly, there simply is hardly enough time in the universe for these supermassive black holes to form as early as they did," Behroozi says.

By creating millions of virtual black holes populating millions of virtual universes, Behroozi hopes to come closer to answering how these cosmic leviathans can exist. Astronomers currently are looking to two possible scenarios, both at odds with each other. One, called the direct collapse theory, proposes a scenario in which black holes can form directly from gas clouds instead of stars collapsing at the end of their lifetimes.

"The idea is that if you have a large enough cloud of gas, you can bypass the star-forming stage and have it collapse into a black hole right from the beginning," Behroozi explains. "This would give a growing black hole a head start and make things much easier."

The other scenario involves the more "tried-and-proven" mechanism of black hole birth: massive stars dying and collapsing into objects so dense that nothing, not even light, can escape their gravity. As time goes on, these individual black holes then merge to become a supermassive black hole.

"The problem with this scenario is that it would have to involve an unknown way for the black hole to sustain a very high growth rate that we don't yet understand," Behroozi says. "Our research helps get closer to the origins at a point in time where the seeds were sown for the black holes we see today."

According to the Packard Foundation, fellows have gone on to receive a range of accolades, including Nobel Prizes in Chemistry and Physics, the Fields Medal, the Alan T. Waterman Award, MacArthur Fellowships and elections to the National Academies. The fellows also gather at annual meetings to discuss their research, where conversations have led to unexpected collaborations across disciplines.

The program was inspired by David Packard’s commitment to strengthen university-based science and engineering programs in the United States. He recognized that the success of the Hewlett-Packard Company, which he cofounded, was derived in large measure from research and development in university laboratories. Since 1988, the Packard Foundation has awarded $429 million to support 617 scientists and engineers from 54 national universities. This year’s fellowships are also supported in part by the Ross M. Brown Family Foundation.

“This new class of fellows is about to embark on a journey to pursue their curiosity down unknown paths in ways that could lead to big discoveries,” said Frances Arnold, chair of the Packard Fellowships Advisory Panel, 2018 Nobel Laureate in Chemistry and 1989 Packard Fellow. “I can’t wait to see what direction the work of these brilliant scientists and engineers will take. Their efforts will add to this beautiful web of science that connects us all to a better understanding of the world around us.”