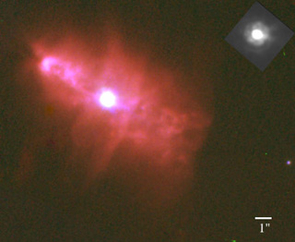 It is the most detailed wide-angle picture yet taken using the large telescope's unique adaptive optics system, a technique that removes atmospheric blurring.

Astronomers from the University of Arizona's Steward Observatory and Center for Astronomical Adaptive Optics made this picture of Planetary Nebula IC 2149 from exposures taken at the UA/Smithsonian MMT Observatory on 8,550-foot Mount Hopkins, Ariz. The planetary nebula, a cloud of gas and dust shed from a dying star, is 3,600 light-years away and 1.5 trillion miles (2.5 trillion kilometers) across.

The observers used UA astronomer Donald W. McCarthy's near-infrared camera ARIES to search for specific gases in the star's debris. They took images in three infrared colors of light, then combined them into a single false-color image.

While astronomers took the images, the large telescope's secondary mirror changed its shape thousands of times each second to compensate in real-time for atmospheric turbulence that distorts starlight. The MMTO's ultra-thin, 2-foot-diameter secondary mirror focuses light as steadily as if Earth had no atmosphere. For more about the MMTO's superb adaptive optics, click here.

First, the images are about three times sharper than images obtained with UA's NICMOS cameras on the Hubble Space Telescope, and they are as sharp as Hubble images at shorter visible wavelengths.

Second, the sharper images show faint structure close to bright objects like stars in much greater detail. The image of IC2149 shows a contorted mixture of gas and dust several thousand times dimmer than the star itself. The halo around the star is the size of solar systems.

The team selected Planetary Nebula IC 2149 for the engineering tests of ARIES from 10 candidate targets during their telescope time last October, Young said.

"What you are seeing here is a star, a little less massive than the sun, that has used up all the fuel at its nuclear-burning core," Young said. "Unable to produce energy, the core starts to contract, and turns into a ball of carbon and oxygen the size of the Earth. This gravitational contraction releases a lot of energy, and that causes the star to shed its outer atmosphere. The material we are actually seeing in the picture is the gas and dust being lit up by the light from the central star."

Their observations suggest that all of the molecular hydrogen in the nebula has been destroyed by radiation from the central star, leaving only ionized hydrogen. Added to other evidence, this indicates that the nebula is several thousands of years old, Young said. Most planetary nebulae disperse and vanish in less than 10,000 years. The gas and dust ejected by the dying star contain heavy elements from which future planets may form.