Astronomers Will Train MMT Telescope on Moon During 2009 Impact

MMT observerations support a NASA mission that will send a small rocket into a lunar crater in a search for frozen water.
Lori Stiles
,
University Communications
Feb. 6, 2009
Resources for the Media
Extra Info:

Mount Lemmon SkyCenter schedules SkyNights for the general public. Those who attend can participate in taking images in support of NASA's LCROSS mission. 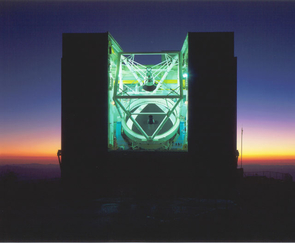 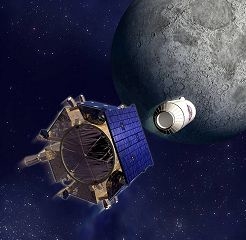 An artist's illustration shows the LCROSS mission shepherding a satellite releasing its SUV-sized rocket toward the moon. 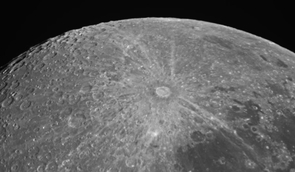 The craters along the uppermost limb, or the very upper edge, are candidate targets for the LCROSS impact in this image of the moon's south pole. The bright, rayed crater that dominates the center of this picture is Tycho. Adam Block of UA's Mount Lemmon SkyCenter took this image.

Astronomers will use the powerful University of Arizona/Smithsonian MMT Observatory on Mount Hopkins, Ariz., to search for lunar water ice when NASA fires a 2-ton rocket into a polar crater on the moon later this year.

Water is a crucial resource on the moon because it would not be practical to transport to space the amount of water needed for human and exploration needs.

NASA selected a team of MMT Observatory and UA Steward Observatory astronomers as one of four ground-based telescope teams to observe the moon on impact with its Lunar CRater Observation and Sensing Satellite mission, known as LCROSS, in August or later.

The LCROSS mission is a small companion mission to the Lunar Reconnaissance Orbiter, scheduled to launch from Cape Canaveral in spring 2009. LCROSS will separate from the lunar orbiter soon after launch.

The piggybacking LCROSS mission consists of a shepherding spacecraft and a rocket weighing as much as a large SUV that will hit the moon at about 5,600 mph, excavating a crater about a third as wide as a football field and about as deep as the deep end of a swimming pool.

Instruments aboard the shepherding spacecraft are designed to search for evidence of water ice on the moon as the rocket collides with a permanently shadowed crater near one of the moon's poles.

Researchers predict that impact debris plumes reaching 30 miles high will be visible from Earth with telescopes as small as 10 to 12 inches in diameter.

At more than 20 times larger, the 6.5-meter (21-foot) MMTO telescope "is well-suited to addressing the first LCROSS mission science goal: Confirm the presence or absence of water ice in a permanently shadowed region on the moon," MMTO director and project team leader Faith Vilas said.

They'll use an infrared camera and an infrared spectrograph in the "ARIES," an instrument that McCarthy developed, to take images and spectra to follow the shape and growth of the developing plume as well as probe for the presence of "phyllosilicates," or clays formed by the interaction of water with rocks.

"If we get the signature for phyllosilicates, then we've got a pretty firm indication that there's been water there," Vilas said.

ARIES also has a second detector that will take images of the plume at slightly shorter infrared wavelengths.

And the team will use a beamsplitter so they can also use a third camera to image the expanding plume in visible light.

"The cameras will take images at 1/100th of a second, so we'll see the plume as it builds and expands through time at high resolution," Vilas said.

Debris plume size and shape is governed by water vapor in the ejecta, she said.

If NASA launches the Lunar Reconnaissance Orbiter in spring as scheduled, the LCROSS spacecraft will be fired in August to hit the moon's north pole, Vilas said.

August is southern Arizona's monsoon season, so there's some risk of being clouded out.

If launch is delayed, then the LCROSS spacecraft will be fired later to hit the moon's south pole in September or October, Vilas added.

Vilas, McCarthy, Hastie and Callahan will check out their observing instruments and strategy at the MMTO during a night's observing this spring.

The MMTO is located at an altitude of 8,550 feet on the summit of Mount Hopkins, the second highest peak in the Santa Rita Range of the Coronado National Forest, about 30 miles south of Tucson.