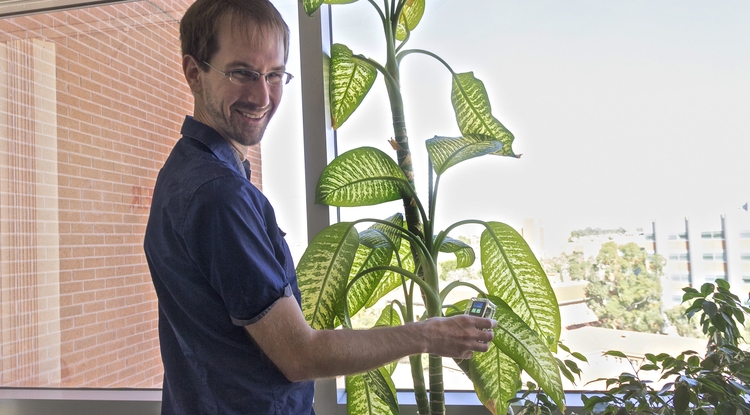 UA computer scientist Peter Jansen, who has an interdisciplinary background in physics and computational neuroscience, has investigated how infants learn languages so that he could train computers to do the same. (Photo: Beatriz Verdugo/UANews)

Attention, Trekkies: Get Your Tricorders Here

While some wait for scientists to produce devices born of the imagination of science-fiction writers, UA postdoctoral fellow Peter Jansen has been doing something about it.
La Monica Everett-Haynes
,
University Relations - Communications
Nov. 10, 2014
Resources for the Media 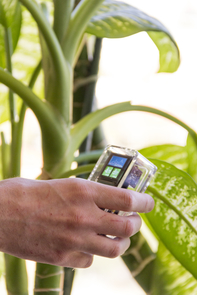 In the "Star Trek" series, Starfleet officers regularly use tricorders, 23rd-century hand-held devices that can detect force fields and radiation, read environmental pressures, locate missing people and even determine a person's health with a simple scan over the body.

At the University of Arizona, computer scientist Peter Jansen has been developing a version of that device, called the Arducorder Mini — and it has been named one of five finalists for the Hackaday Prize, a globally competitive race to develop a potentially marketable device.

Developers from around the world submitted about 800 projects and prototypes, each of them representing an open, connected device. After 50 semifinalists were named, the committee chose five finalists. The competition's winner, to be named in Munich on Nov. 13, will choose one of two prizes: nearly $200,000 in prize money or a ticket for commercial space travel in the future.

As founder of the Tricorder Project, Jansen has been developing tricorder devices as a hobby for nearly a decade.

"I found that I was trying to make devices that were more and more complicated, but less and less finished," said Jansen, an expert in cognitive artificial intelligence and computational neuroscience and a postdoctoral researcher in the School of Information: Science, Technology, and Arts. "The cool thing about this is that it has been a neat, five-month project — it's been like a horse and a carrot type of project to get it done."

The Arducorder Mini, the most recent iteration, is a pocket-size device carrying one dozen different interconnected sensors, which can measure and image temperature and other thermal dynamics, magnetic fields, radiation, motion, atmospheric dynamics including lightning, the properties of light and spectra, and more.

Already, with its many sensors, the Arducorder Mini can capture simultaneous readings at once. Such a device could then be connected and feed a database of information, allowing users to analyze and interpret data.

"It's sort of like a Swiss Army knife for science," Jansen said. "It's designed to be general. Part of the idea is that you can think of a million uses."

The prototype, which Jansen is working to finalize, can stream the information it records to the Web, where it can be viewed instantly by anyone around the world. Like a camera, it also can upload snapshots — but of light spectra or radiation footprints instead of pictures.

In its marketable form, the device would allow users to produce thermal and magnetic field maps of a space or investigate how much chlorophyll a leaf holds, how much pollution is in the air, a car's emissions and even where in a house a contractor skimped on insulation.

But those are the standard, easy-to-imagine applications, said Jansen, who envisions a more robust future for small-scale technological devices like those he has worked to develop.

"There hasn't been a multi-tool for science before, and certainly not one designed to be inexpensive and that is able to instantly upload so much information," Jansen said.

In the same way that mobile devices have become a single housing unit for a telephone, radio, video recorder, calculator and other devices, Jansen envisions that technologies such as the Arducorder Mini will be available for everyday scientific purposes in the future.

Jansen modeled the Arducorder attuned to the emergent process of combining input from different sensors into a comprehensive data output.

He also designed the device to interface with Arduino, a popular open-source hardware and platform often used as a learning tool for computer science, and Plot.ly, a Web-based data sharing and analytics tool.

"It is infinitely more useful if you can press a button and have anyone on planet Earth who has a phone, tablet or computer see your data in seconds," Jansen said.

In fact, Jansen is motivated to produce technologies that are easily attainable and understandable for a general populace. As a scientist, he said this is one of his main charges.

"The other use case, which has the potential for higher impact, is that idea that when you walk into a science class from grades 1 to 12, it can be really boring. We get most of our scientific knowledge from a book at that point," he said. "That's not going to breed very fluent scientists."

But building inexpensive, easy-to-use personal scanners for science could do that, Jansen said.

"If you could give a kid an inexpensive tool like this, in 20 to 30 years that kid will be wandering around with a beautiful conceptual understanding of science," he said.