Another collaboration involving UA scientists and filmmakers has resulted in "Insecta: Science That Stings," which will be shown at The Loft Cinema in Tucson at 7 p.m. on Nov. 28. 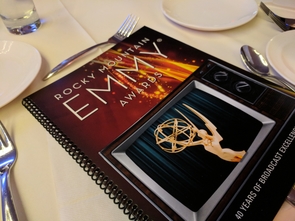 "Beyond the Mirage: The Future of Water in the West" received top honors in the topical documentary category at the recent Rocky Mountain Emmy Awards in Phoenix. Filmed and produced by the College of Agriculture and Life Sciences' Communications and Cyber Technologies department at the University of Arizona, the documentary first aired on Arizona Public Media in April 2016.

"We knew we had made a great film and an important film, but when we watched the other entries in our category, we realized how stiff the competition was going to be. It was pins and needles until the big moment — and then pretty surreal to be up onstage accepting an Emmy," said Cody Sheehy, producer and team leader of "Beyond the Mirage."

Two years in the making, the documentary explores new technologies and challenges old ideas through interwoven stories that connect the Colorado snowpack to the lights of Las Vegas. It presents the challenges facing — and the competition involving — the desert cities of Arizona, California and Nevada, and it introduces potential solutions being developed in Israel and China.

With a background in the sciences, Sheehy understood how important it would be to partner with water experts, such as Sharon Megdal, director of Arizona's Water Resources Research Center, or WRRC, on developing the storyline for "Beyond the Mirage."

Projections show that within the next 25 to 30 years there will be a 1.2 million acre-feet gap in Arizona's water supply. The pairing of overpumping groundwater and overallocating river supplies has put the Southwest in a precarious position. As Arizona looks into the future, there is not enough water to cover the needs of a growing population, agriculture and industry.

Megdal and her staff — Susanna Eden, Kerry Schwartz and Ashley Hullinger — provided Sheehy with massive amounts of information and a list of more than 60 water experts to interview, including UA researchers Robert Glennon, Gregg Garfin, Connie Woodhouse and Mike Crimmins. The WRRC team also fact-checked all of Sheehy's content to make sure that it was current and scientifically accurate.

"We made an effort to be rigorous with the facts," Eden said. "It was a challenge to balance that and to never lose sight of the fact that 'Beyond the Mirage' had to be interesting and engaging."

WRRC also helped secure funding for the project by leading an effort to apply for the $100,000 New Arizona Prize, Water Consciousness Challenge. Sponsored by the Arizona Community Foundation, the prize is aimed at raising water awareness in Arizona. The "Beyond the Mirage" team was awarded the prize in April 2015.

The filming of "Beyond the Mirage" also inspired development of a new social storytelling technology, Filmstacker. Licensed by Tech Launch Arizona, Filmstacker allows any water stakeholder to adapt the "Beyond the Mirage" storyline based on their choices. Users also can find content that matches their community and easily edit those clips into short films for sharing. According to Sheehy, Filmstacker "takes the creativity of filmmaking and makes it a social experience for the first time."

"We are continuing to research and develop this technology for use in industries such as media, events and tourism, and we also envision it being implemented in social impact and conservation storytelling," Sheehy says. "That said, it has always been our passion to see this technology reach its full potential, where anyone can upload their own content and mix it with everyone else's — true collaborative filmmaking. That's when it will get really exciting."

The Rocky Mountain Emmys are a division of the National Academy of Television Arts & Sciences. This year's Emmys were attended by professional filmmakers, television executives and guests from across Arizona, New Mexico, Utah and parts of California.