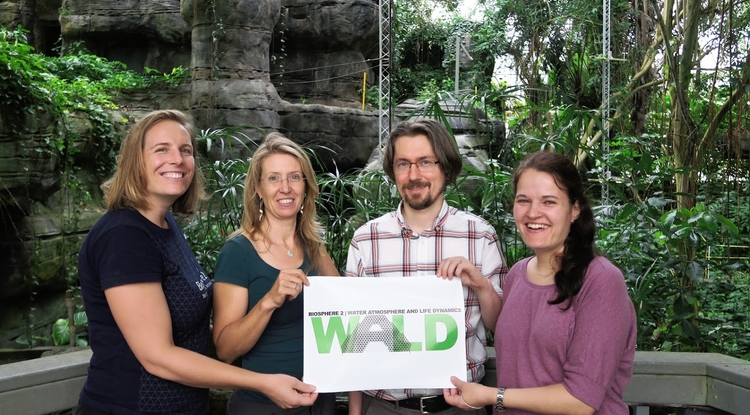 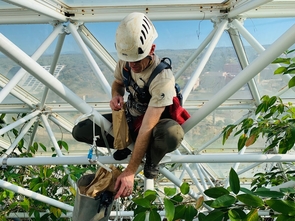 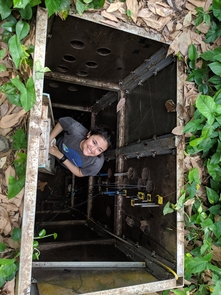 Drought will soon descend on the University of Arizona’s Biosphere 2 rain forest, and an international research team will be ready with an array of instruments to record what unfurls under the glass.

The drought is part of a four-month-long experiment known as Water, Atmosphere and Life Dynamics. Dubbed WALD, which is German for “forest,” the study is expected to shed light on how tropical ecosystems will fare under the stress of a hotter, drier shift in climate.

Biosphere 2 has closed the rain forest to the public for the duration of the research, but visitors are still invited to explore other biomes under the glass.

“We’re broadly curious about an ecosystem’s response to drought, and we’re measuring it in a way that’s unparalleled,” said Laura Meredith, the rain forest science director for Biosphere 2 and one of three leads on this international project. “We get to control when the drought happens, and we’re ready with instruments. This is helpful for testing models to predict what happens with global tropical forests under climate change.”

The experiment is part of a $2.1 million (€1.9 million), five-year European Research Council grant acquired by Christiane Werner, a professor of ecosystem physiology at Germany’s University of Freiburg and one of the project leads. Junior investigator Nemiah Ladd, also of Freiburg, co-organized the grant and is the third project lead.

Normally, the Biosphere 2 rain forest receives 5,300 gallons of rain – enough to fill more than 65 bathtubs – three times per week. This month, Meredith and the team will take measurements and observe the biome under normal conditions before shutting off the rain in October.

The team will track how carbon dioxide and water vapor flow through the system before and after the artificial drought, which will allow them to understand how the rain forest will respond to the stress, Werner said.

“The first part is to go to individual components of the ecosystem, such as the leaves, soil and roots, and understand how they process carbon,” said Meredith, an assistant professor of ecosystem genomics in the School of Natural Resources and member of the BIO5 Institute. “When plants have carbon in the bank, they need to decide how to spend it. Do they grow or spend carbon in other ways to deal with the stress?”

To determine how plants of various species allocate carbon, the team use a small molecule called pyruvate to feed a specific type of carbon atom – an isotope called “carbon 13” – directly to the soil, roots and leaves. The movement of carbon 13 through the ecosystem will be traced using sensors embedded in the plants and throughout the biome.

The researchers also plan to use another approach: pulse labeling. By injecting a burst of carbon 13 in the form of gaseous carbon dioxide into the biome, they can trace how the plants, soil and microbes uptake and move the carbon.

“We want to know if the measurements from the bottom-up match those from the top-down,” Meredith said.

This method is not only unique, but also useful for researchers who intend to model ecosystem processes in a pinpointed way. Water will be traced in a similar fashion, by tracking the movement of water from soil pools to the top of the atmosphere.

The international team will also genetically characterize the microbial communities living in the soils and leaves with support from the UA Office of Research, Discovery and Innovation and the U.S. Department of Energy User Facilities.

Meredith said they expect to find that plants use carbon in different ways under stress. She also expects plants, soil and microbes to create different VOCs than they do under normal conditions and indicated they could possibly even discover new types of VOCs.

Many volatile organic compounds are important for atmospheric chemistry, but questions remain about what biologically creates them. The team will also investigate the relationship between VOCs and microbes.

“Volatile organic compounds are in lotions, deodorants, shampoos and more,” said Biosphere 2 deputy director John Adams. “If people were allowed in the rain forest during the experiment, the volatile organic compounds they give off could make it difficult for researchers to decipher what’s coming from people and what’s coming from the rain forest.”

The researchers said this kind of science can only be done in a place like Biosphere 2.

“What I like about Biosphere 2 is that it has grown naturally for so long,” Werner said, adding that the ecosystem's longevity makes it a more reliable proxy for a rain forest than a lab.

“Biosphere 2 is a place of limitless possibilities and hyper imagination,” Meredith said. “And for me, my interests are in the relationship between the atmosphere and microbes within the Earth’s biosphere (Biosphere 1). Biosphere 2 is contained, which makes it an exaggerated lab where you can directly measure the role of life on the atmosphere. It’s really powerful.”

Werner got the first spark of the idea when she visited Biosphere 2 in 2011. It has since snowballed into an initiative driven by 50 researchers from four countries, 10 European institutions and three American institutions. The team includes researchers from diverse fields such as atmospheric sciences, microbiology, genomics, hydrology, cyberinfrastructure, ecology, plant science and more, Werner said.

“We’re excited because we’ve always envisioned Biosphere 2 as a user facility,” Adams said. “This will strengthen that mission and show the validity by bringing together an international team.”