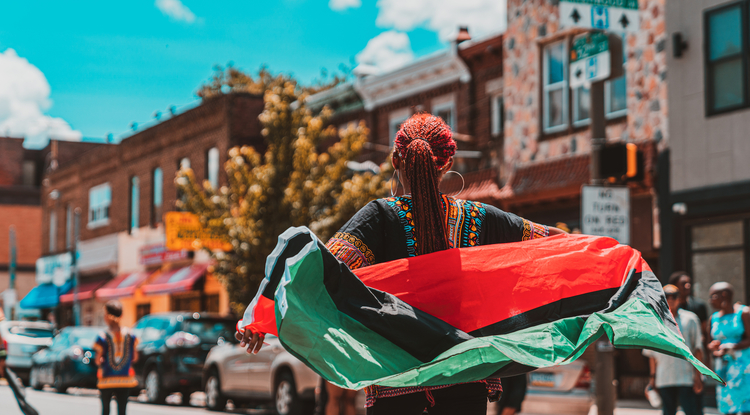 A Juneteenth parade in Philadelphia last year. UArizona historian Tyina Steptoe says the holiday celebrating the emancipation of Confederate slaves will likely be recognized by increasingly diverse groups this year and into the future.

UArizona historian Tyina Steptoe discusses the history of the holiday that recognizes emancipation, and why more people than ever may celebrate it this year and in the future.
Kyle Mittan
,
University Communications
June 17, 2020
Resources for the Media 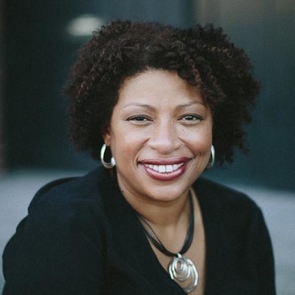 Many will recognize Friday, June 19, as Juneteenth, a holiday that honors the emancipation of Confederate slaves and is celebrated in many states with barbecues and festivals.

The day has its origins in Galveston, Texas, where, in 1865, a Union Army general announced all slaves would be free more than two years after President Abraham Lincoln signed the Emancipation Proclamation. Texas – then called the District of Texas – marked the western-most reaches of the Confederacy, and one of the last regions where slavery fell as the Union Army moved through the South.

Tyina Steptoe, a UArizona associate professor of history, studies race, gender and culture in the United States. Steptoe is also a native of Houston, just miles from Galveston, and has written about Houston's transformation into one of the country's most diverse cities.

Steptoe talked to UANews about how Juneteenth celebrations have evolved over time, what Juneteenth means to her and how the Black Lives Matter movement could shape the way the day is celebrated.

Q: Juneteenth is derived from the order that Maj. Gen. Gordon Granger read on June 19, 1865, in the District of Texas headquarters in Galveston. But the Emancipation Proclamation ostensibly ended slavery 2 1/2 years before that. Why did slavery not truly end in 1863?

A: It's actually really simple: The majority of enslaved African Americans lived in the Confederacy and Abraham Lincoln was president of the United States. When President Lincoln made the proclamation, it was for what he referred to as the rebel states. The Confederacy considered itself to be its own country – they had their own government; they printed their own money. These states that are in open rebellion are not exactly going to listen to a rule created by the president who is not of their country.

This misconception that the Emancipation Proclamation ended slavery, I think, comes from a misunderstanding of the Civil War. I think a lot of modern Americans don't take seriously the fact that the Confederacy did form its own country. They called themselves the Confederate States of America and went to war to defend it. So, if they're in the middle of a war, they're not going to stop and start obeying Abraham Lincoln. I think when you put it that way, it seems very obvious, but for some reason, that's not the way most Americans conceptualize the Confederacy anymore.

The Emancipation Proclamation is the turning point in the Civil War. It does make very clear that this was now a war that would end slavery if the Union was victorious. So, it raises the stakes of the Civil War and lets the Confederacy know that if they lose, slavery is over.

Q: What change did Maj. Gen. Granger's order in 1865 bring to make the end of slavery a reality?

You see a sort of ripple effect happen – wherever there are Union soldiers, this is where slavery falls. Texas saw significantly less military action, so the institution of slavery survived the war. Texas is way out west in terms of slave-holding areas of the Confederacy. And so, then, Granger's announcement that the war had ended two months earlier, and the Union had won, is what finally ended enslavement in that region.

I wish enslavement had been as easy to end as Lincoln signing a proclamation. But slavery could not fall that easily, especially when the majority of enslaved people lived in the C.S.A., which had declared itself a separate government.

Q: How is Juneteenth typically celebrated?

A: When I was young, I didn't even know the history behind it, fully. I just knew that Juneteenth was a day that people barbecued and got together. It was just such a ubiquitous thing when I was growing up in Texas. I always knew when it was, and that it was a day for barbecues, but it wasn't until I started getting older that I learned the history behind it, and maybe even high school before I learned that I lived so close to where Juneteenth actually started. When I got older is when I started noticing that only other black people I knew were celebrating it, and that's how I started to learn the history behind it.

When I was researching my book on the history of Houston is when I learned that Juneteenth was intertwined with all sorts of economic and political and cultural meaning in Houston for a very long time, going back to the 20th century. For example, I found that on Juneteenth back around the World War I era, local hotels would serve these carryout dinners to white families who had black maids because the understanding was that African Americans had the day off. A lot of white families relied on the labor of black women who worked as cooks and maids and African American men who worked as chauffeurs and gardeners. They relied on this labor so much that on Juneteenth, when all of them were off from work, hotels like the fancy Rice Hotel in downtown Houston used to serve these carryout dinners. Juneteenth being a black holiday was something that white Texans certainly recognized, and that they understood was going to affect the local economy around black labor.

Q: Galveston, where Juneteenth originated, is just outside your hometown of Houston, as you've said. What does the holiday mean to you personally?

A: It's changed over time from when I was growing up in Houston to becoming a person who wrote about Houston and Texas professionally. When I was growing up, I looked forward to it because it was a celebration; it was family coming together. I looked forward to the celebratory aspects of it, and we always had barbecue. There was always very Texas-style barbecue, which usually included ribs, brisket, smoked sausage, chicken. It was a big feast day for us in my family.

When I got older, I saw it as Emancipation Day more fully than I did when I was young. I've lived in different parts of the country – I've lived in Madison, Wisconsin, I've lived in Seattle, Washington, and now Tucson. I've celebrated Juneteenth in every place I've lived since leaving Texas. So, for me as an adult, Juneteenth means something different because it's more connected to celebrating my culture as a black Texan, very specifically. As a Texan who doesn't live in Texas anymore, it's a connection to my roots.

Q: As we find ourselves amid a pandemic, traditional celebrations aren't possible for many. What are some productive ways people can recognize this occasion?

A: I think one way to celebrate Juneteenth, for people who are able, is to cook and enjoy food with their families. This could be a way of talking about African American culture and tradition. If you're not African American and didn't grow up with those culinary traditions, I encourage you to support black restaurants in the Tucson area.

Q: How might the recent momentum of the Black Lives Matter movement impact how Juneteenth is observed this year and in the future? For example, some national companies have announced they are making it a paid holiday.

A: One of the things that I find fascinating is here in the United States, as well as globally, is that right now, the particular shape that Black Lives Matter is taking has forced people to really think about the longer histories of racism that have gotten us to this moment, and not just looking at the death of George Floyd or Breonna Taylor as isolated events. People have connected Black Lives Matter today with this long history of colonization and enslavement.

Because of that, Juneteenth has taken on a special meaning this year. As I said before, Juneteenth has been a celebration. And, certainly, I think that's going to be part of it, but because of the pandemic, the public aspect of Juneteenth celebrating can't happen in the same way.

I think Black Lives Matter, the pandemic, all of these things converge on Juneteenth. And I think that it's made Juneteenth this year the center of activism. National companies announcing it as a paid holiday, I think, is a reflection that Juneteenth today is part of this political moment, and so it's become part of larger activism.

I also think it shows that Juneteenth has continued to grow throughout the 20th century, going from a holiday celebrated by black people in places like Texas and Oklahoma and then moving across the country during the Great Migration. When Texans moved to California in the 1940s and 50s, they took Juneteenth with them. Black migrants started having Juneteenth celebrations in Los Angeles or Seattle and all these places where black Texans moved. So, Juneteenth goes from a regional holiday to an increasingly national holiday during World War II, but still mostly celebrated by African Americans.

What I think we're seeing right now is Juneteenth spreading from just being a holiday that African Americans celebrate to a tradition that is increasingly recognized by diverse groups across the world. With Juneteenth falling in this political moment that we're in right now, I think we're going to see that even more. Next year, so many people are going to know about Juneteenth and observe it because it's become more national, interethnic and interracial in the way that people recognize it.