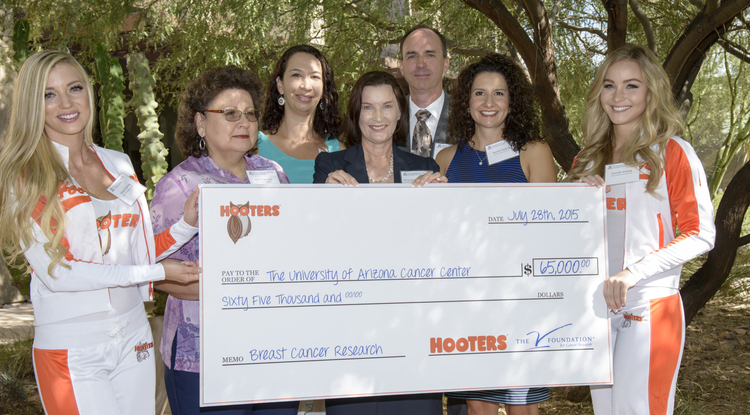 The newest grant received by the UA's Chris Segrin and Terry Badger centers on women who often have limited access to health care services.
UA College of Social and Behavioral Sciences
Oct. 29, 2015
Resources for the Media 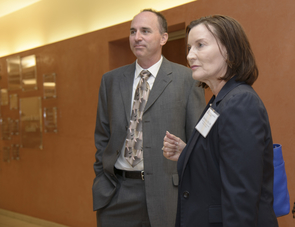 Chris Segrin and Terry Badger are working to reduce symptoms of depression, anxiety and fatigue in breast cancer patients and their family members. To recruit patients, the research team will travel to rural communities to meet with providers and community health workers, among other tactics. (Photo: Kristen Hanning, AHS BioCommunications)

For several years, University of Arizona researchers Chris Segrin and Terry Badger have combined their areas of expertise to investigate the role of communication on the health and well-being of cancer patients and their partners.

This summer, the V Foundation for Cancer Research donated $65,000 to the Arizona Cancer Center to fund research by Segrin, the Steve and Nancy Lynn Endowed Professor, and Badger, a professor in the College of Nursing.

With the new grant from the foundation, Segrin and Badger are beginning to specifically target Latinas who live in rural areas — individuals who often have limited access to health care services — in clinical trials that deliver interventions to manage and improve quality of life.

"They are doubly at risk," said Segrin, also director of the UA Department of Communication. "This is a population that seems custom tailored for our telephone intervention."

The grant will expand on the duo's $1.5 million grant from the American Cancer Society, which focuses on Latinas with breast cancer and their partners, replicating their previous study with primarily white women. They are currently in the third yearof the five-year grant.

Patients and their partners in the study each receive either a health education intervention or an interpersonal counseling intervention over the telephone for 30 minutes once a week for eight weeks. Measurement of quality-of-life and health indicators occurs at four times over six months.

So far, patients and their partners have responded well to the intervention, with decreased symptoms of depression, anxiety and fatigue. The phenomenon of "emotional contagion" that the researchers found in previous studies — that the emotional state of the patient and partners are related — was found in all relationship types, not just with spouses.

Latinas are an underserved population, often not seen by a doctor until their breast cancer has progressed to Stage III or IV, Segrin said. Such women also are usually younger — in their 30s and 40s — than white women in Segrin's and Badger's previous study.

Also, health care professionals historically have overlooked the experience of the partner of the cancer patient, Segrin said. Yet, partners also experience emotional distress such as depression, helplessness, anxiety and exhaustion. And patients who have a partner who is emotionally distressed do worse, both emotionally and physically.

Thus, providing the intervention to the patient's partner is a key part of the study.

Segrin said that one of the key differences between the white and Latina women is that they tend to name different members as "supportive partner." White women tend to choose their husbands; Latinas tend to choose other females, such as a mother or sister.

Segrin believes the concept of "marianismo," a cultural ideal for females to be selfless caregivers, may be playing a role in how Latino families deal with illness. He also said it helps to have access to counselors who are Latina, who speak Spanish and also have children.

"That is a big part of how we structure the intervention," he said. "We want to be culturally competent. The counselor has to match the values of the people they are speaking to."

Segrin predicts even more powerful effects with the rural patients and partners. Whereas patients in populated areas have access to support groups and probably are visiting doctors and specialists on a regular basis, patients in rural areas are much more isolated.

Segrin also said he hopes that his research with Badger draws attention to the need to provide health information and counseling to both the patient and their partner throughout the cancer experience. He also is excited to be extending his research to tackle the health disparities found in minority populations.

"Given that Arizona has such a large Latina population, the UA is a fantastic place to be doing this type of research," Segrin said. "Hopefully, our research can have a real regional impact on health care."