The largest festival in the Southwest dedicated to showcasing the wondrous diversity of bugs is expected to draw thousands to the UA campus on Sunday.
Daniel Stolte
,
University Relations – Communications
Sept. 15, 2016
Resources for the Media
Extra Info: 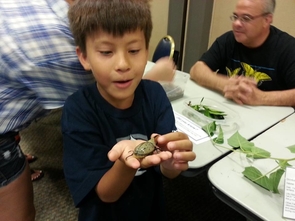 The western Hercules beetle is this year's featured insect at the festival. It is one of the largest beetles of the desert Southwest. 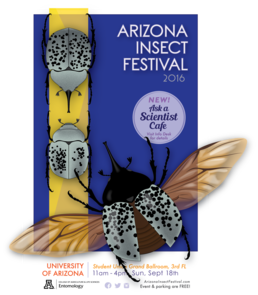 The festival is one of the few of its kind, providing attractions for children, adults and any level of interest. Nearly every booth is directed by a UA researcher who is equally comfortable showing people how to pet a friendly bug or talk serious science.

Why are some beetles green and others red? Does a bumble bee fall in love? Can a praying mantis remember what it ate for lunch?

These are just a few of the questions University of Arizona entomology and insect science graduate students will be ready to answer at their "Ask a Scientist Café" from 11 a.m. to 4 p.m. Sunday at the Arizona Insect Festival in the Student Union Memorial Center's Grand Ballroom.

"Arthropods are life forms that are completely alien to most of us, and insects provide a fun and safe opportunity to explore some of that," says Cara Gibson, an assistant professor of practice in the UA Department of Entomology, who is one of the organizers and also the artist behind promotional pieces such as the event poster and T-shirts.

"Why is it that many people think of crustaceans as a delicacy, but insects are gross, even though the two are very closely related? The festival provides incentives to challenge these notions in a party atmosphere."

Last year, the festival drew about 6,500 visitors who were eager to learn about — and get their hands on — the "smaller majority" of Earth's biodiversity (insects make up more than 52 percent of known species).

This year's festival will have more than 20 booths, including "Insects as Architects," an exhibit highlighting all the different things insects make to improve their lives and sometimes ours. Interactive exhibits abound, with a new section on aquatic insects in the Arthropod Zoo, a celebration of insect biodiversity from the Tucson region and the world, including stations where visitors can wrangle a live insect on their own. For the first time, visitors will have a chance to watch bombardier beetles fire off their explosive defense mechanism.

An expanded Arthropod Affection Area will offer visitors opportunities to get up close and personal with bugs. A popular display on metamorphosis — the miraculous transformation from a larva into an adult — will remain at the heart of the exhibit.

Pollinators feature prominently this year, as changes in land use are affecting the environment and the human beneficiaries of the services provided by bees, butterflies and other creatures.

"One in three bites of the food we eat comes from pollinators," Gibson says. "And while we mostly rely on the honey bee to pollinate the crops we eat, it's easy to forget that the Desert Southwest ranks No. 1 for bee diversity in the world. We just don't notice them as much because those bees are mostly solitary, and many are small, but they perform terribly important functions pollinating our native plants."

The UA's Insect Festival stands out among similar events around the country. In addition to bug-themed fun activities, it provides the public with an opportunity to interact with experts and learn about insect-related research firsthand.

"Nearly every booth is directed by a lead investigator from the UA," Gibson says, "so yes, we have the bug crafts and all that fun stuff, but you also can learn about transgenic crops or the physiology of pests by chatting with scientists. We have something for everyone."

The organizers make an effort to ensure that the festival maintains its appeal to repeat visitors, particularly to children at various stages of interest and education.

"A preschooler probably isn't going to check out the booth about transgenic crops but may enjoy the 'Insects as Architects' activity where they can sprawl on a quilt and assemble their version of a crawly creature home from building blocks," Gibson says. "And right next to that, you'll see an intermediate activity where kids turn clay, glue and paper into insect dwellings. The whole idea is for them to come back each year and learn new things as they grow up."

Gibson says she is especially thrilled when she sees "kiddos that have come to the annual festival since the beginning in 2011 and now are volunteering."

This year's featured insect is the western Hercules beetle, Dynastes granti, a type of rhinoceros beetle that is native to Arizona. Measuring 2 to 3 inches and found at higher elevations, the beetle "stands out when you see it," according to Gene Hall, manager of the Insect Collection in the UA College of Agriculture and Life Sciences. "It's one of the largest beetles we have here — it's charismatic and very dynamic."

The Hercules beetle sports a gray outer cuticle that turns black under the influence of moisture and rain. Only the males have horns. Adults feed on tree sap but are harmless to the tree.

"We live in a region that has greater diversity of arthropods than any other region in the U.S.," Hall says. "Each year, we tend to pick an insect from our region to showcase that diversity, and this year's insect comes from an especially diverse group: There are more species described in the group that makes up the beetles than in any other group of organisms."

Free parking is available in several garages in the vicinity of the festival.