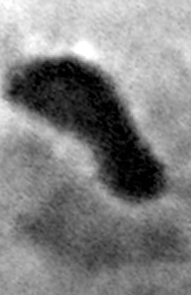 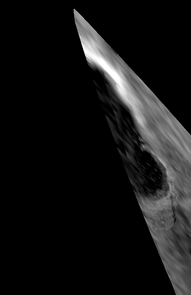 The visual and infrared mapping spectrometer (VIMS) aboard NASA's Cassini orbiter captured this detailed, partial view of Titan's Ontario Lacus at 5 microns wavelength from 1,100 kilometers away, or about 680 miles away, on Dec. 4, 2007. Only part of the lake is visible on Titan's sunlit side. What appears to be a 'beach' is seen in the lower right of the image, below the bright lake shoreline.

Scientists have confirmed that at least one body in our solar system, other than Earth, has a surface liquid lake.

Using an instrument on NASA's Cassini orbiter, they discovered that a lake-like feature in the south polar region of Saturn's moon, Titan, is truly wet. The lake is about 235 kilometers, or 150 miles, long.

The visual and infrared mapping spectrometer, or VIMS, an instrument run from The University Arizona, identifies the chemical composition of objects by the way matter reflects light.

When VIMS observed the lake, named Ontario Lacus, it detected ethane, a simple hydrocarbon that Titan experts have long been searching for. The ethane is in liquid solution with methane, nitrogen and other low-molecular weight hydrocarbons.

"This is the first observation that really pins down that Titan has a surface lake filled with liquid," VIMS principal investigator and professor Robert H. Brown of the UA's Lunar and Planetary Laboratory said. Brown and his team report their results in the July 31 issue of the journal Nature.

"Detection of liquid ethane in Ontario Lacus confirms a long-held idea that lakes and seas filled with methane and ethane exist on Titan," said Larry Soderblom of the U.S. Geological Survey, Flagstaff, Ariz.

The fact that the VIMS could detect the spectral signatures of ethane on the moon's dimly lit surface while viewing at a highly slanted angle through Titan's thick atmosphere "raises expectations for exciting future lake discoveries by the infrared spectrometer," Soderblom, an interdisciplinary Cassini scientist, said.

The ubiquitous hydrocarbon haze in Titan's atmosphere hinders the view to Titan's surface. But there are transparent atmospheric "windows" at certain infrared light wavelengths through which Cassini's VIMS can see to the ground. VIMS observed Ontario Lacus on Cassini's 38th close flyby of Titan in December 2007.

The lake is roughly 20,000 square kilometers, or 7,800 square miles, just slightly larger than North America's Lake Ontario, Brown said. Infrared spectroscopy doesn't tell the researchers how deep the lake is, other than it must be at least a centimeter or two, or about three-quarters of an inch, deep.

"We know the lake is liquid because it reflects essentially no light at 5-micron wavelengths," Brown said. "It was hard for us to accept the fact that the feature was so black when we first saw it. More than 99.9 percent of the light that reaches the lake never gets out again. For it to be that dark, the surface has to be extremely quiescent, mirror smooth. No naturally produced solid could be that smooth."

VIMS observations at 2-micron wavelengths shows the lake holds ethane. The scientists saw the specific signature of ethane as a dip at the precise wavelength that ethane absorbs infrared light. Tiny ethane particles almost as fine as cigarette smoke are apparently filtering out of the atmosphere and into the lake, Brown said.

Ethane is a simple hydrocarbon produced when ultraviolet light from the sun breaks up its parent molecule, methane, in Titan's methane-rich, mostly nitrogen atmosphere.

Before the Cassini mission, several scientists thought that Titan would be awash in global oceans of ethane and other light hydrocarbons, the byproducts of photolysis, or the action of ultraviolet light on methane over 4.5 billion years of solar system history. But 40 close flybys of Titan by the Cassini spacecraft show no such oceans exist.

The observations also suggest the lake is evaporating. The lake is ringed by a dark beach, where the black lake merges with the bright shoreline.

"We can see there's a shelf, a beach, that is being exposed as the lake evaporates," Brown said.

That the beach is darker than the shoreline could mean that the "sand" on the beach is wet with organics, or it could be covered with a thin layer of liquid organics, he said.

The VIMS measurements rule out the presence of water ice, ammonia, ammonia hydrate and carbon dioxide in Ontario Lacus.

Titan, which is one-and-a-half times the size of Earth's moon and bigger than either Mercury or Pluto, is one of the most fascinating bodies in the solar system when it comes to exploring environments that may give rise to life.

Cassini cameras and radar and the UA-built camera aboard the European Space Agency's Huygens probe that landed on Titan in January 2005 have shown that methane saturates and drains from Titan's atmosphere, creating river-like and lake-like features on the surface. Just as water cycles through the hydrologic regime on Earth, methane cycles through a methanological cycle on Titan.

The Cassini-Huygens mission is a cooperative project of NASA, the European Space Agency and the Italian Space Agency. The Jet Propulsion Laboratory , a division of the California Institute of Technology in Pasadena, managers the Cassini-Huygens mission for NASA's Science Mission Directorate, Washington. The Cassini orbiter was designed, developed and assembled at JPL. The Visual and Infrared Mapping Spectrometer team is based at the UA.