In many developing countries, subsistence farmers, like this family pictured in a sorghum field in Tanzania, are at particularly high risk of losing grass crops because of a climate that changes too fast for the plants to adapt. (Photo courtesy of ICRISAT HOPE)

Climate Change May Move Too Quickly for Grasses

Grasslands and grass crops, covering much of the world's land area and providing half of the calories humans eat, may be unable to respond quickly enough to a changing climate that is outpacing the plants' ability to adapt.
Daniel Stolte
,
University Communications
Sept. 30, 2016
Resources for the Media 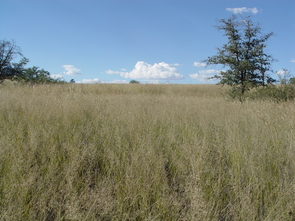 Mixed grasslands like this one near Sonoita, Arizona, cover much of the earth's surface. (Photo: John Wiens) 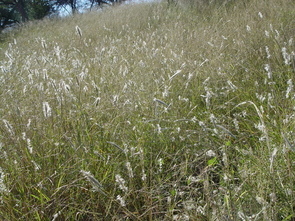 The pace of climate change may push many grass species closer to extinction. With crop grasses providing about half of the world's calories, local extinctions are particularly threatening to farmers in the developing world that don't have access to large-scale agricultural means such as the potential to ramp up irrigation. (Photo: John Wiens)

Grasses across the globe may be unable to keep pace with a changing climate, threatening some of the world's most critical food sources, according to new research by University of Arizona ecologists.

Comparing past rates of niche change in 236 species of plants in the grass family with projected rates of climatic change by 2070, the team led by Alice Cang and John Wiens found that the rate of future climate change may dramatically outpace the capabilities of grasses to change their niches and survive. In terms of temperature, the discrepancy between past and projected rates often was found to be as high as 5,000-fold. The study is published in Biology Letters, a journal published by the Royal Society in the U.K.

"Cultivated crops in the grass family account for half of the calories consumed by humans," said Wiens, a professor in the UA's Department of Ecology and Evolutionary Biology. "For example, wheat, corn, rice and sorghum are all grasses that together occupy more than half of farmed land worldwide."

In addition to the implications for agriculture and food supply, natural grasslands cover about a quarter of Earth's land area and are habitats for many plant and animal species that depend on them.

"Much of the world is covered by grasses, so this is not a type of landscape where we would want to have large-scale extinctions," Wiens said.

"Let's say the climate warms by two degrees in an area where a local population of grasses grows," Wiens explained. "If the population survives that change, it was able to shift its climatic niche. From an evolutionary perspective, we find that niches change very slowly and often not very much. The rates of niche change among grass species are often just a few degrees per million years. But now, species may need to make similar changes in less than a hundred years."

When a species faces a rapid shift in its local climate, three outcomes are likely, according to the paper: It can move to higher elevations and latitudes to stay within its original niche conditions; shift its niche to encompass the new conditions; or go extinct.

The consequences of local extinctions or declines in grasses because of climate change may be most severe in developing countries.

"For example, many subsistence farmers in the developing world can't simply move their crops to new locations with more suitable climate or ramp up large-scale irrigation," Wiens said.

To estimate past rates of climatic niche shifts, the researchers reconstructed ancestral values of each climatic variable for the ancestor of each pair of closely related species. They then looked at the difference between the current estimated niche value for each species and that of its most recent common ancestor, which gives the niche shift each species had undergone during its evolutionary history.

They then compared the pace of these niche shifts to the pace of climatic change from three projected scenarios representing minimum, maximum and intermediate levels of future change. Rates of niche change in temperature variables typically fall between 1 and 8 degrees Celsius per million years, whereas rates of future change are approximately 0.02 degrees per year, and about 3,000 – 20,000 times faster.

Previous research by the Wiens lab revealed that vertebrate species are even more susceptible to being outrun by climate change, with projected rates of climate changed often exceeding rates of climatic niche change by 100,000-fold. Although the study did not specifically study this, domesticated crop species may be less resilient to climate change than their wild counterparts because breeding over millennia forced them through a genetic bottleneck of reduced genetic variation.

Cang, Wiens and co-author Ashley Wilson caution that their results cannot show directly what will happen in the future because of the inherent difficulty of predicting the effect of climate change on species and populations. For example, niche shifts might be much faster over shorter time periods. However, the amount of niche change needed to match projected climate change might still be too much for many species.

Other lines of evidence support the conclusions, indicating that niche shifts might be too slow to save local populations and species from extinction under climate change. For example, field experiments revealed that individuals of a grassland plant species did not fare well when transplanted to warmer and drier locations. Also, many plant species already are showing local extinctions in the warmest parts of their geographic ranges.

"These different lines of evidence suggest that many species may not be able to evolve out of danger on their own," Wiens said. "Considering that grasses are one of the most important groups of plants for humans, there may be serious consequences."