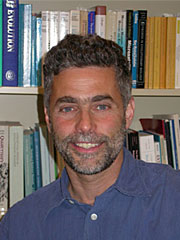 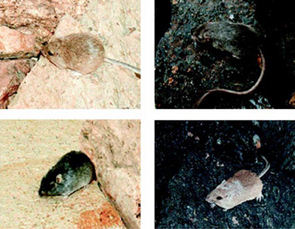 Rock pocket mice are common denizens of the Sonoran desert regions around Tucson, but you'll probably never see one in the wild. The small rodents are strictly nocturnal, finding refuge from the daytime desert heat in their underground burrows. By night, they gather seeds, their only source of food and water, and do their best to elude owls, their main predators.

Now, these inconspicuous animals may have gained some celebrity as a textbook example of adaptation by natural selection, thanks to a team of University of Arizona evolutionary biologists.

The group, led by Professor of ecology and evolutionary biology Michael W. Nachman, examined the coat colors of rock pocket mice. Most of the mice have light tawny fur, which blends in well with the desert granite substrates they typically inhabit. But scattered throughout the southwest are islands of black basaltic rock formed from not-so-ancient lava flows. Nachman's group collected pocket mice from two of these black rock islandsthe Pinacate formation in southwestern Arizona and the Pedro Armendaris formation of New Mexico. Almost all of the mice collected from the volcanic formations had dark coatsthe better to stay concealed from hungry owls, which can pick off mice from contrasting backgrounds even at night.

The story is reminiscent of the peppered moth lesson from high school biology class. In pre-industrial England, most peppered moths had mottled grey wings, camouflaging well with the birch trees upon which they rested. Coal soot from burgeoning industry gradually blackened tree trunks in urban areas, and left the moths more vulnerable to predators. In a short time, though, dark variants of the moths sprang up. Better camouflaged than their light-colored brethren, the dark forms survived and proliferated. Eventually, black became the norm for urban peppered moths. As the cities reduced the pollution, the tree trunks lightened up, and so did the moths. A classic illustration of "survival of the fittest."

Peppered moths make a compelling case study in natural selection. "But even after more than 50 years of intensive study," Nachman said, "we still don't know which genes are involved." In fact, he added, "there are very few examples where we actually know the genes that underlie an adaptation in nature, and almost no examples for cases of natural selection that are not induced by human disturbances," such as pesticide or heavy metal resistance.

That's where Nachman's study stands out. Biologists have worked out in fine detail the genetic and biochemical processes that control mammalian coat color, particularly for the common lab mouse, an evolutionary cousin of rock pocket mice. Scores of different genes control fur pigmentation, and thanks to modern genomic technology, they've all been identified at the DNA sequence level for lab mice.

Some of the genes exert more influence on the color palette than others, which fine-tune the hues and patterns. One gene, called Mc1r, stimulates production of the black pigment in coat fibers. Another, called agouti, controls lighter yellow and reddish pigmentation.

Nachman's group made an educated guess that genetic differences in either the Mc1r or agouti genes might account for the dark pelage of rock pocket mice living in the volcanic areas. They knew the DNA sequences of the lab mouse versions of these genes, which helped them to find and read the genes from their rock pocket mouse specimens. In addition to sampling the dark mice captured on the basaltic areas, they sampled light mice captured on light rocks just adjacent to the sites.

What they found was astounding. The Pinacate mice showed a perfect match between coat color and spelling of their Mc1r gene. All 18 dark-colored Pinacate mice shared a common set of 4 single-letter spelling differences in their Mc1r gene compared to the light-colored mice collected nearby. And several exceptions proved the rule. Two light mice collected on the dark rocks used the "light spelling" for their Mc1r genes, and the lone dark mouse found on the adjacent light rocks used the "dark" spelling.

This perfect association between the genetics and the coat color makes it almost certain that the dark color in the Pinacate mice is caused by the changes in their Mc1r gene, according to Nachman. "This is a study where we really have all the pieces of the puzzle in one place. That's why it's excitingwe can make the link all the way from genotype to phenotype," Nachman said. Further, Nachman said the findings show "you can have relatively few mutations that have a major effect on phenotype," which suggests "it's not a big step to make a radical change in a phenotype that is essential for the survival of the animal in its environment.

Surprisingly, it was a different story for the New Mexico mice. Coat color differences in mice from the Armendaris formation could not be explained by genetic changes in either the Mc1r gene or the agouti gene, and so far, Nachman said, his team does not know what causes the dark coloration in that mouse population. That, in itself, is an important result, Nachman noted. "Different genes have mutated to produce nearly identical dark mice in different places," illustrating that "there are different genetic solutions to an evolutionary problem. It's a dramatic example of convergent evolution, and it came as a surprise to me."

Nachman recently published on this work in the Proceedings of the National Academy of Sciences and in Molecular Ecology together with Susan L. D'Agostino, a research specialist, and Hopi E. Hoekstra, a postdoctoral researcher in the lab.