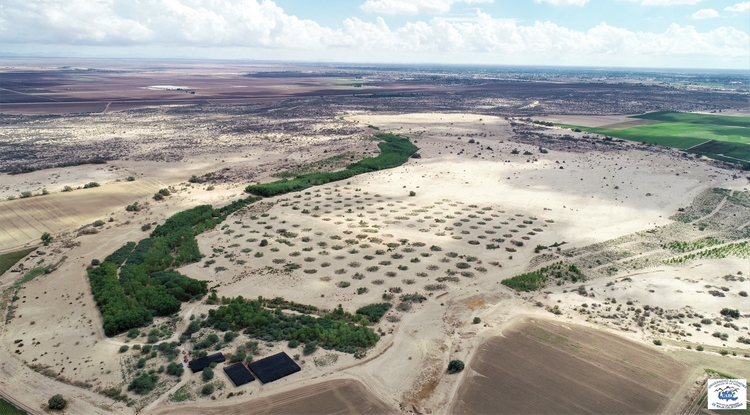 The cottonwood and willow trees planted since 2014 at the Miguel Aleman restoration site on the Colorado River Delta form the curved ribbon of dark green along abandoned back channel of the Colorado River. (Photo: Ernesto García Arvizu, Universidad Autónoma de Baja California)

Four growing seasons after the engineered spring flood of the Colorado River Delta in March 2014, the delta’s birds, plants and groundwater continue to benefit, according to a report prepared for the International Boundary and Water Commission by a binational University of Arizona-led team.

"This report provides solid scientific information about our restoration efforts. The findings will help us apply environmental water more effectively in the future," Harkins said.

Karl W. Flessa, UA professor of geosciences and co-chief scientist of the Minute 319 monitoring team, said, "We learned that a little bit of water, in the right places, does a lot of environmental good. The report is really a road map for restoration in the delta."

The report documents the effects of the environmental flows in the delta from the initial release of a pulse of water from March 23 through May 18, 2014, plus subsequent supplemental deliveries of water through December 2017.

The 2014 pulse flow delivered a fraction of the water the pre-1960 spring floods delivered. People from the Sonoran Institute and Pronatura Noroeste cleared two areas of non-native vegetation beforehand. Restauremos el Colorado has since cleared a third site.

The restoration teams hoped reducing competition would allow native plants such as willows and cottonwoods to germinate and grow after the pulse flow.

The teams planted more than 275,000 willows, cottonwoods, mesquite and palo verde trees in three actively managed restoration sites that total 915 acres (370 hectares). Survival rates for the trees range from 75 to 95 percent. Some of the trees are now more than 14 feet (4.2 meters) tall.

"The restoration teams from the Sonoran Institute, Pronatura Noroeste and Restauremos el Colorado are applying what we’ve learned to locate and prepare restoration sites, plant native trees and deliver just the right amount of water at just the right times," Flessa said.

The diversity and abundance of birds of special conservation concern increased after the pulse flow and remain high in the restoration sites, the researchers write in the report.

In addition, the researchers found the pulse flow recharged groundwater in the delta and showed it was possible to reconnect the Colorado with the Gulf of California.

"The people living in the riverside communities celebrated when the pulse flow briefly restored water to their river," Flessa said. "Kids splashed in the water, a brass band played under the San Luis Rio Colorado bridge and people picnicked on the riverbank."

The International Boundary and Water Commission in El Paso, Texas, funded the UA portion of the Minute 319 monitoring program.

The International Boundary and Water Commission and its partners continue with their restoration efforts under Minute 323, an agreement covering a nine-year period through 2026. Minute 323 provides for at least 210,000 acre-feet of water for environmental purposes, $9 million for scientific research and monitoring, and $9 million for restoration projects. The UA’s Flessa is the lead scientist for the science and monitoring effort.