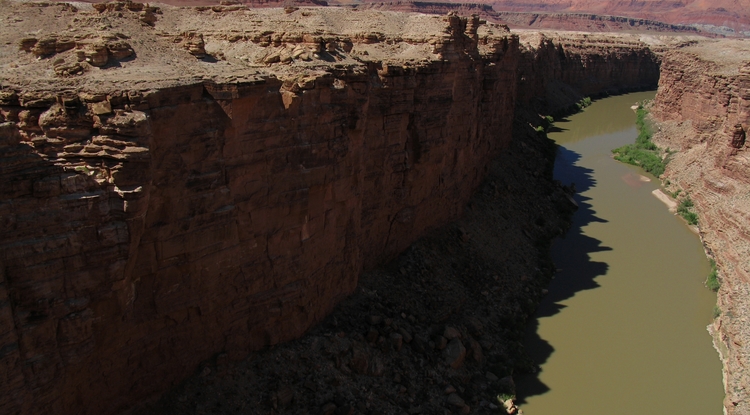 The UA's Jonathan Overpeck says new research is the first to show the large role that warming temperatures are playing in reducing the flows of the Colorado River.
Mari N. Jensen
,
UA College of Science
Feb. 20, 2017
Resources for the Media 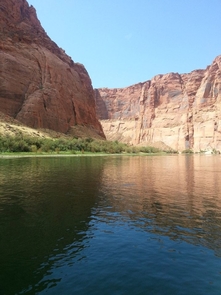 Warming in the 21st century reduced Colorado River flows by at least 0.5 million acre-feet, about the amount of water used by 2 million people for one year, according to new research from the University of Arizona and Colorado State University.

The research is the first to quantify the different effects of temperature and precipitation on recent Colorado River flow, said authors Bradley Udall of CSU and Jonathan Overpeck of the UA.

"This paper is the first to show the large role that warming temperatures are playing in reducing the flows of the Colorado River," said Overpeck, UA Regents' Professor of Geosciences and of Hydrology and Atmospheric Sciences and director of the UA Institute of the Environment.

From 2000-2014, the river's flows declined to only 81 percent of the 20th-century average, a reduction of about 2.9 million acre-feet of water per year. One acre-foot of water will serve a family of four for one year, according to the U.S. Bureau of Reclamation.

From one-sixth to one-half of the 21st-century reduction in flow can be attributed to the higher temperatures since 2000, Udall and Overpeck report. Their analysis shows as temperature continues to increase with climate change, Colorado River flows will continue to decline.

Current climate change models indicate temperatures will increase as long as humans continue to emit greenhouse gases into the atmosphere, but the projections of future precipitation are far less certain.

Forty million people rely on the Colorado River for water, according to the U.S. Bureau of Reclamation. The river supplies water to seven U.S. Western states plus the Mexican states of Sonora and Baja California.

Udall, a senior water and climate scientist/scholar at CSU's Colorado Water Institute, said, "The future of Colorado River is far less rosy than other recent assessments have portrayed. A clear message to water managers is that they need to plan for significantly lower river flows."

The Colorado River Basin has been in a drought since 2000. Previous research has shown the region's risk of a megadrought — one lasting more than 20 years — rises as temperatures increase.

"We're the first to make the case that warming alone could cause Colorado River flow declines of 30 percent by midcentury and over 50 percent by the end of the century if greenhouse gas emissions continue unabated," Overpeck said.

The team began its investigation because Udall learned that recent Colorado flows were lower than managers expected given the amount of precipitation. The two researchers wanted to provide water managers with insight into how future projections of temperature and precipitation for the Colorado River Basin would affect the river's flows.

Udall and Overpeck began by looking at the drought years of 2000-2014. About 85 percent of the river's flow originates as precipitation in the Upper Basin — the part of the river that drains portions of Wyoming, Utah, Colorado and New Mexico. The team found during 2000-2014, temperatures in the river's Upper Basin were 1.6 degrees Fahrenheit (0.9 degree Celsius) higher than the average for the previous 105 years.

To see how increased temperatures might contribute to the reductions in the river's flow that have been observed since 2000, Udall and Overpeck reviewed and synthesized 25 years of research about how climate and climate change have and will affect the region and how temperature and precipitation affect the river's flows.

Water loss increases as temperatures rise because plants use more water, and higher temperatures increase evaporative loss from the soil and from the water surface and lengthen the growing season.

In previous research, Overpeck and other colleagues showed current climate models simulated 20th-century conditions well, but the models cannot simulate the 20- to 60-year megadroughts known to have occurred in the past. Moreover, many of those models did not reproduce the current drought.

Those researchers and others suggest the risk of a multidecadal drought in the Southwest in the 21st century is much higher than climate models indicate and that as temperatures increase, the risk of such a drought increases.

"A megadrought in this century will throw all our operating rules out the window," Udall said.

Udall and Overpeck found all current climate models agree that temperatures in the Colorado River Basin will continue rising if the emission of greenhouse gases is not curbed. However, the models' predictions of future precipitation in the basin have much more uncertainty.

"Even if the precipitation does increase, our work indicates that there are likely to be drought periods as long as several decades when precipitation will still fall below normal," Overpeck said.

"I was surprised at the extent to which the uncertain precipitation aspects of the current projections hid the temperature-induced flow declines," Udall said.

The U.S. Bureau of Reclamation lumps temperature and precipitation together in its projections of Colorado River flow, he said.

"Current planning understates the challenge that climate change poses to the water supplies in the American Southwest," he said. "My goal is to help water managers incorporate this information into their long-term planning efforts."