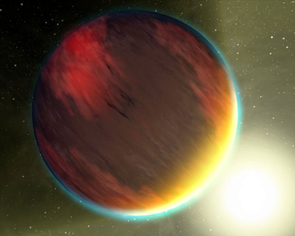 This artist's concept shows a cloudy, Jupiter-like planet that orbits very close to its fiery star. Spitzer Space Telescope observations for at least one such planet, called HD 189733b, showed the nightside temperatures are 1,300 degrees Fahrenheit hotter than they would be on a wind-free planet.

Computer simulations of the atmospheric circulation on Jupiter-like planets around other stars can explain temperature observations of these planets and shed light on the exotic weather experienced by these far-away worlds.

Approximately 300 planets have been discovered around other stars, and for most of those planets, scientists know little more than the mass and orbital properties of the planet. However, for a handful of the brightest planets, temperatures have been inferred from observations carried out with spacebased platforms such as NASA's Spitzer Space Telescope. Those observations and the computer simulations used to explain them, hint at weather patterns truly alien to our Earth-based experience.

Adam Showman of The University of Arizona led a study explaining how a global atmospheric circulation driven by the dayside heating and nightside cooling can drive weather on the so-called "hot Jupiters" – Jupiter-like gaseous giant planets that orbit extremely close to their stars.

"These planets are 20 times closer to their star than Earth is to the Sun, and so they are truly blasted by starlight," Showman said. Their dayside temperatures reach 2,000 or even 3,000 degrees Fahrenheit, much hotter than any planet in the Solar System.

Observations conducted last year with the Spitzer Space Telescope showed, however, that for at least one such planet, called HD 189733b, the nightside temperature exceeds 1,300 degrees Fahrenheit – much warmer than expected for a wind-free planet. This shows that winds carry heat from the dayside to the nightside, keeping the nightside warm. Until now, however, no computer models had successfully explained this process in detail.

Showman and colleagues performed state-of-the-art 3D computer simulations that, for the first time, coupled the weather motions to a realistic representation for how starlight is absorbed and how heat is lost to space. The models explain the observed day-night temperature patterns and suggest that, to carry the heat, the planet must have jet streams with speeds reaching a hefty 2 miles per second or 7,000 miles per hour.

"You're talking about winds fast enough to carry you in a hot air balloon from San Francisco to New York in 25 minutes," Showman said.

The winds predicted by the computer simulations move predominantly from west to east, which pushes the hottest regions away from the region that receives the most starlight.

"According to the observations, the hottest region on the planet is not 'high noon' but eastward of that by maybe 30 degrees of longitude," Showman explained. "Our simulations are the first to explain why that phenomenon occurs."

The planet, HD 189733b, is 63 light years from Earth and is in the constellation of Vulpecula, or the Fox. The star around which the planet orbits, HD 189733, is visible with binoculars from here on the ground, but the planet is much too dim to be detected except with the most powerful space-based telescopes.

Also involved in the study are Jonathan Fortney of U.C. Santa Cruz, Yuan Lian of the UA, Mark Marley and Richard Freedman of NASA Ames Research Center in Mountain View, California, and Heather Knutson and David Charbonneau of Harvard University.

So what's the weather forecast for these planets? "Hot Jupiters are pretty crazy places," said Showman. "Expect supersonic winds and dayside temperatures hot enough to melt lead and rocks. Only problem is, if you tried to visit, you'd be fried to a crisp before you could enjoy the view."