A new course this fall at the UA will teach students about the 20th-century history and culture of Mexico by looking at icons in popular culture.
Lori Harwood
,
UA College of Social and Behavioral Sciences
Aug. 7, 2017
Resources for the Media
Extra Info:

Seats are still available for "MAS 395A: Mexican Superheroes, Demons and Idols."

Pancho Villa, the famous bandit and revolutionary leader, was a demon to some and a hero to others.
El Chapulin Colorado (The Red Grasshopper) 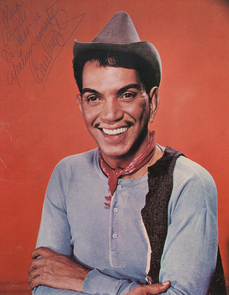 Cantinflas, a comedian from the 1950s, "represents Mexican poor people. He is an underdog in a very poor neighborhood," Luis Coronado Guel says.

This fall, Luis Coronado Guel will teach a new University of Arizona course titled "MAS 395A: Mexican Superheroes, Demons and Idols," which will examine Mexican society, culture and history by analyzing and discussing the role of popular icons.

Guel, is a postdoctoral research associate and coordinator of the College of Social and Behavioral Sciences' Mexico Initiatives, created the course to teach the 20th-century history of Mexico through the lens of icons in music, film, comics and television shows.

Students will learn to analyze the historical context in which the icons were created. Guel says that superheroes, idols and demons represent people's fears and hopes. They embody popular notions of justice, patriotism, solidarity and protection. They also reflect social parameters of identity, class, race, education and gender.

Guel, who obtained his Ph.D. from the UA Department of History, researches the popular culture and history of Mexico. Born in San Luis Potosí, Mexico, Guel received his bachelor's degree in law from the Autonomous University of San Luis Potosí and his master's in history from El Colegio de San Luis.

"I was attracted to analyzing comics and TV shows in order to be closer to my students," Guel said. "It makes history attractive to younger generations. History is not only about dates, facts and events, about generals and battles and revolutions. It is also about everyday life."

Guel said that a comparison of Mexican and U.S. superheroes affords a look into the differing fears and aspirations of the cultures.

"Mexican superheroes are very tangible, very real," Guel said. "There is fantasy around them, but in other ways they are very realistic and human."

Guel cited El Chapulin Colorado, also known as the Red Grasshopper, a comedic superhero who doesn't really have a superpower.

"He’s short, dumb, weak," Guel said, paraphrasing the character's creator as saying, "What is the point of saving the world if you have super vision or can leap on a train to avoid catastrophe? If you are weak, if you have fears, but you are able to confront those fears, you are a superhero."

As an example of an idol, Guel cited Pedro Infante, a popular actor and singer who Guel called "Mexico's version of Elvis Presley and Frank Sinatra." Even though Infante died in 1957, he is still broadcast on Mexico television every Sunday.

"Having him onscreen teaches the younger generation how Mexicans portrayed themselves in this so-called golden age of the cinema in the 1940 and '50s," Guel said.

Guel said stereotypical representations of gender are reflected in Mexico's icons, even more so in the middle of the 20th century. Nevertheless, icons such as artist Frida Khalo fought for equal rights for women. Actress Maria Felix represented a femme fatale similar to Marilyn Monroe: "She took control of her destiny but was presented as being an evil woman."

"In some situations, you don't know if it is better to cry or to laugh," Guel said. "The country survives because we decide to laugh."

As coordinator of Mexico Initiatives, Guel works to create collaborations with Mexican institutions, attract more Mexican students to the social sciences and develop curriculum on the country.

Guel and colleagues also recently received a grant from the UA Confluencenter for Creative Inquiry for their project "On the Edge: Expressions of Shared Heritages Throughout Bounding Spaces."

The project brings together an international, interdisciplinary group of scholars to address border problems.

"I don't see the border as a physical one," Guel said. "There are linguistic ones, cultural ones. Many of the conflicts we face right now are because we don't understand each other. The main intention of this project is to create theoretical approaches to shared culture."