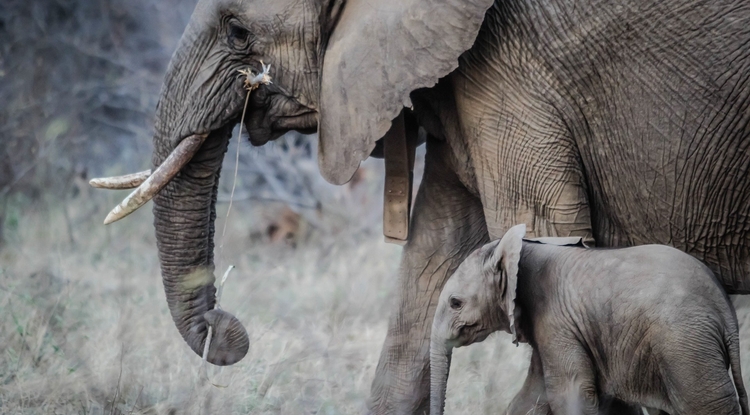 Elephants are an example of organisms that have few, but large, offspring. Elephants also put more energy into rearing their offspring than many animals, such as fish, which lay their eggs and leave them behind.

Deciphering the Equations of Life

A new theory describes what all animals have in common and allows predictions for organisms that might not be well understood by science.
Mikayla Mace
,
University Communications
Dec. 11, 2019
Resources for the Media

Research led by the University of Arizona has resulted in a set of equations that describes and predicts commonalities across life despite its enormous diversity.

“Our study develops a general theory to study the extraordinary diversity of life using simple rules common to all species. We can further apply these rules to predict specific traits of species that we might know a lot less about,” said Joseph ‘Robbie’ Burger, an ecology and evolutionary biology postdoctoral fellow in the Institute of the Environment and the Bridging Biodiversity and Conservation Science program at the University of Arizona. These specific traits, include the timing of an organism’s reproduction and death, are called an organism’s life history.

Burger is lead author on a paper, published in the journal Proceedings of the National Academy of Sciences, which also included collaborators from Missouri University Science and Technology and the University of New Mexico.

“When thinking about the enormous varieties of lifeforms, it would seem that life is very complicated and wouldn’t be that predictable,” he said. But whether you’re as large as a whale or as tiny as plankton, or whether you’re a giant clam that lays millions of eggs at once or an elephant that births a few 250-pound calves in a lifetime, all species have evolved to reproduce, grow, survive and replace within universal biophysical constraints.

“If you impose these constraints on the mathematical model, then certain unifying patterns fall out,” Burger said.

One of the constraints is demography. Regardless of the number of offspring produced in a lifetime, on average, only two survive to replace the parents. Another constraint is mass-energy balance. Living things allocate energy to bodily maintenance, growth and reproduction, all of which must balance in a lifecycle.

Imposing these constraints explains two fundamental tradeoffs in how organisms reproduce: the tradeoff between number and size of offspring, and between parental investment in offspring and offspring growth.

“What’s so cool about these equations is that to solve it, all you have to know are two values – the size of the offspring at independence and the adult size," Burger said. "If you plug that into the equation, you get the number of offspring an organism will produce in a lifetime and myriad other life history characteristics.”

To arrive at this new understanding of how organisms allocate energy to growth, reproduction and survival, Burger and his colleagues compiled published data on the life histories of a diverse array of wild animals in stable populations.

Their new theory refines old understandings about life history tradeoffs. Past assumptions were that offspring size and number increased or decreased at the same rate. For example, elephants have relatively large calves, so they have few in a lifetime, while tuna produce millions of tiny eggs. It turns out that the relationship is not so straightforward, a realization that inspired Burger’s work.

“We now need to put these equations to practice by developing user-friendly programming tools, collaborating with field scientists to refine ecosystem models and informing management decisions,” he said.