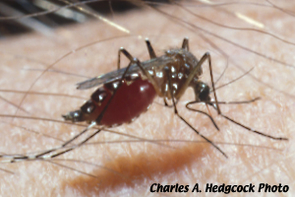 Tucson may be part of the Sonoran Desert, but to the mosquito Aedes aegypti, it's a tropical paradise. Unlike other mosquito species, this one survives in small--very smallamounts of water, in a cup, in a watering can, in dishes under potted plants or in trash left around the yard that accumulates water during the monsoon season.

But more threatening than a nasty bite, this mosquito transmits dengue fever, a virus endemic to more than 100 countries around the world (see sidebar). Although Tucson has never had an outbreak of dengue, it does support year-round populations of A. aegypti that are able to carry the virus from person to person.

Henry Hagedorn, a professor of entomology at the University of Arizona, along with research associate Frank Ramberg and a team of undergraduate students, is studying the ecology of this mosquito to find out if it's going to be an important vector of dengue in Tucson. To be a threat to public health in Arizona, both the mosquito and the virus must be present. So far, the researchers have determined that Tucson has high numbers of A. aegypti, but no dengue fever. Yet its presence here as a potential carrier of dengue makes it a potential medical threat in Tucson, according to Hagedorn.

"It lives around humans, breeds in our back yards, and in our homes," he says. "Controlling the mosquito is a matter of controlling the backyard breeding sites."

Hagedorn and his team have run a series of tests in Tucson to analyze parts of the insect's life cycle and its feeding habits. So far they have focused on the mosquito's egg-laying behavior, the frequency of its blood meals, and how often it bites animals other than humans. Also under study are the various ways people make their homes and back yards attractive habitats for the insect. Findings so far:

"We need to find out how the population in Tucson is related to those in Phoenix, and other cities in Arizona, Texas and Mexico," Hagedorn says. Since the mosquito prefers living in areas with moisture, the adult insects can't survive flying across long stretches of empty desert. So how are they moving? And how fast are they moving? Hagedorn believes it's possible that the mosquitoes in Phoenix may have arrived there not by flying from Tucson, but by hitching rides in cars or trucks.

To keep the mosquitoes from taking up residence, Hagedorn advises homeowners to focus on environments in and around the home that attract A. aegypti, including shrubbery that adults hide in, and places in and around the home that contain water. Window and door screens can prevent mosquitoes from entering the home; pet access ports may allow more than pets in.

"If you have an evaporative cooler that is not well maintained, mosquitoes can breed in it," Hagedorn says. Windows are often left open while using the cooler. "The best way to avoid dengue fever is to reduce the access the mosquito may have to you."