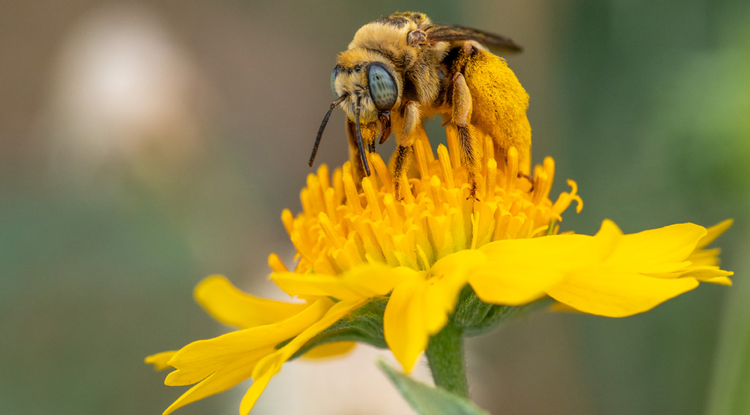 The Desert is Abuzz with Bees

The University of Arizona Insect Collection is collaborating with Pima Community College students and the Arizona-Sonora Desert Museum to catalog every native species of bee in Tucson and the surrounding Sonoran Desert.
Mikayla Mace
,
University Communications
Oct. 16, 2019
Resources for the Media
Extra Info:

The Arizona Insect Festival will celebrate the local diversity of native bees. The festival, which is open to the public, will include interactive exhibits from university scientists and the Arizona-Sonora Desert Museum, as well as live music and over 25 booths with interactive displays on insects and insect research taking place at the university and in the community.

When you conjure an image of the Sonoran Desert in your mind’s eye, it’s likely populated with pale sand baking under a constant sun and plump cactus parked beneath twiggy trees flecked with miniature leaves. During the day, animals lay in shade while cicadas saturate the senses with their ceaseless buzz. But above all else, make sure to include a wide variety of…bees?

It’s estimated that up to 1,000 species of native bees call the Sonoran Desert home. If the region doesn’t host the greatest native bee diversity in the world, then it is a close second only to the deserts of Israel. Both are hotspots for solitary native bees, which, unlike honeybees and bumblebees, live alone and not in colonies. Yet, they are just as important to pollination.

The University of Arizona Insect Collection is connecting bee researchers, students in an introductory level biology course at Pima Community College and conservationists at the Arizona-Sonora Desert Museum to increase our knowledge of native bee species in and around Tucson. In the process, the team will nail down just how many bees really do live in our region.

The team is a branch of an initiative called Tucson Bee Collaborative. The goal is to build a resource that will facilitate future research on native bees, according to project lead Wendy Moore, an associate professor of entomology in the College of Agriculture and Life Sciences at the University of Arizona. Moore is also curator of the UA Insect Collection, which houses about 35,000 insect species.

A Plethora of Pollinators

Bees, which Moore describes as vegan wasps, come in a kaleidoscopic variety of appearances and behaviors.

According to Kim Franklin, conservation research scientist for the Arizona-Sonora Desert Museum: Bees can range from gnat-sized to over an inch long. Some are hairy; Others are nearly bald. Some bees, like honey and bumble, are social. But the vast majority are solitary bees. Some will only visit very specific flowers while others are not picky. They collect pollen to feed baby bees while the adults feed on nectar. Moms do all the work, building nests that are most commonly underground and laying their eggs on top of pollen they have collected to nourish their young. Only honeybees live in hives.

“We want to expand the University of Arizona Insect Collection such that it includes representative specimens of every single bee species native to the Sonoran Desert Regions,” Moore said.

“It’s difficult to identify certain bees by appearance alone and can be very labor intensive, but the technology that students are using, called DNA barcoding, makes it much easier,” said Jennifer Katcher, an instructional faculty in biology at Pima Community College who is leading the student-driven science side of the project.

The process begins with traps set by Arizona-Sonora Desert Museum volunteers deployed every two weeks for 48 hours year-round. Once the bees are collected, volunteers send mounted, labeled specimens to the insect collection, where they are cataloged and photographed.

Pima students then visit the University of Arizona to tour the Insect Collection and meet the bee they will barcode.

Embedded within the DNA of every living thing is a pattern of nucleotides, called the barcode region, that is unique to each species. Barcoding requires DNA extraction: Bee cells are extracted, crushed and spun at high speeds, separating out the genetic material. Once the DNA is extracted, it is archived in the collection and a portion is separated into tiny vials and shared with the students, who then make copies of the barcode region using a method called the polymerase chain reaction, or PCR.

“Imagine the whole genome is like a 1,000-page book and we’re making 100 copies of page six,” Katcher said. This provides enough DNA to sequence the barcoding region, which allows students to identify bee species.

The barcode region of DNA is important because it generally evolves at the approximately the same rate as speciation occurs, which is why it is indicative of different species.

“It’s analogous to a barcode at the supermarket. Because we have some regions of the genome that are relatively specific at the species level, we can use DNA sequence data of these regions to put the power of species identification into anyone’s hands who has access to that sequence and a reference library of sequences that have been expertly identified to the species-level,” Moore said.

Students publish the barcode sequence they obtain from their bee, along with photos and other specimen-specific information, on the Barcode of Life Data Systems database, where researchers around the globe can access it.

Identifying insect species without molecular tools requires meticulous visual appraisal, a keen eye and many years of training. Moore, for example, focuses her research on a family of beetles with about 40,000 known species, each with their own defining features. Molecular tools allow researchers without specialized training to identify organisms and even discover new species.

“One thing I really love about the Barcode of Life initiative is that it has established high quality control standards for documenting molecular data from specimens,” Moore said.

When species do not have a match in the Barcode of Life database, specimens are sent to global bee experts for identification and confirmation as a new species. Ultimately, the collaborative is helping to build a reference library of published barcodes from expertly identified specimens.

“You can’t effectively conserve bees until you know what’s out there,” Katcher said.

“A lot of ecological questions depend on what species you’re interacting with," Franklin added. "For example, we still don’t know a lot about how some bees spend much of their lifetimes.”

The students have already published barcodes for 78 species, 28 of which were new to the Barcode of Life database. They’ll add several dozen more by the end of the fall semester.

This research experience is a chance for Pima students to become published researchers and visit the University of Arizona, where they could potentially transfer. Half of undergraduate biology classes are taken at community colleges across the country, while only 3% of research on best practices in the field involves community college students, according to Lisa Corwin, biology education researcher at the University of Colorado and a co-principal investigator on the project.

Pima Community College, the University of Arizona and the University of Colorado at Boulder received $300,000 in funding from the National Science Foundation to evaluate Pima students’ learning outcomes, how they overcome challenges while executing the scientific method and if they identify as a scientist after participating in research.

On Oct. 20, the Arizona Insect Festival will celebrate the local diversity of native bees. The public is invited to learn from both students and faculty how barcoding works. The festival will also include interactive exhibits from university scientists and the Arizona-Sonora Desert Museum, as well as live music and over 25 booths with interactive displays on insects and insect research taking place at the university and in the community.