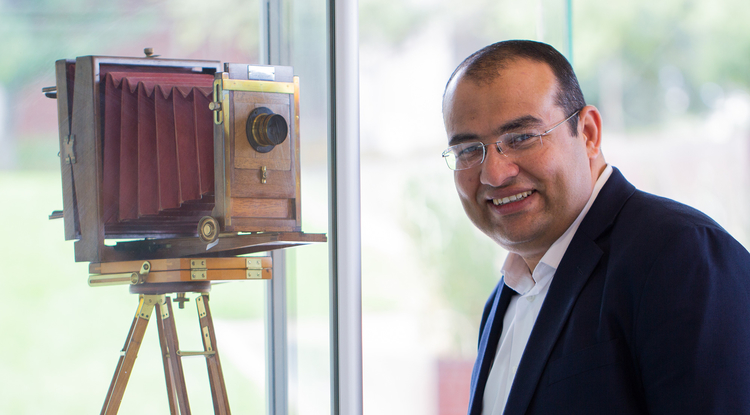 Physicist Mohammed Hassan wants the UA to be the first place where humans take a photo of an electron in motion. Thanks to $1.75 million in grants, it just might happen.
Emily Litvack
,
UA Office of Research, Discovery & Innovation
Jan. 4, 2019
Resources for the Media

Mohammed Hassan, an assistant professor of physics and optical sciences at the University of Arizona, has been awarded two grants in support of his research, which focuses on creating images of electrons in motion.

"This work will be very important for understanding electronic behavior and also to examine the possibility of controlling the electronic motion by using ultrafast light pulses. The in-action imaging of electron motion will reveal beyond doubt electron dynamics that promise to break new ground, with prospects for basic science, information technology and biological applications," Hassan said.

Hassan received a two-year, $1.3 million Gordon and Betty Moore Foundation research investigator award to fund the development and utilization of an attosecond electron imaging facility for capturing images of electron motion in real time. An attosecond is one-quintillionth of a second.

"I am so grateful that the Gordon and Betty Moore Foundation gave me this opportunity in support of my ambitious research program. Their support is crucial to developing the fastest camera ever that has an attosecond resolution to image the electron motion in action, which I don't think it could be possible without their generous support," said Hassan, who is also a member of the UA BIO5 Institute.

"This project funded by the AFOSR will have a great potential application to advance optical electronics, which will be the next generation of electronic devices and will enhance communication capability," Hassan said.

The Air Force Office of Scientific Research has awarded $13.9 million in grants to 31 scientists and engineers from 24 research institutions and businesses. The program is designed to foster creative research in science and engineering, enhance early career development of outstanding young investigators, and increase opportunities for young investigators to recognize the Air Force mission and the related challenges in science and engineering.

Hassan developed the light field synthesizer apparatus that generated the first optical attosecond pulse, which was recognized by Guinness World Records as the shortest pulse of visible light. Exploiting this tool, he was able to measure the time an electron takes to respond to an external light field. His breakthroughs have been published in leading journals, including Nature and Science.

"Dr. Hassan's innovative research is at the forefront of electronic behavior and it is an excellent example of the way that basic research conducted at the University of Arizona has potential real-world applications that could revolutionize technology and the way that we view the universe,” said UA President Robert C. Robbins. “It is because of outstanding talent like Dr. Hassan and the incredible research that he is doing that the UA has what it takes to be a national leader in the Fourth Industrial Revolution. I am thrilled to find out what Dr. Hassan will be able to do with these grants and what this will mean for the next generation of electronic devices."

"These projects have the potential to make me the first electron photographer and the University of Arizona the first place where humankind takes an image of an electron, and I'm very excited to make it happen in the coming years," Hassan said.