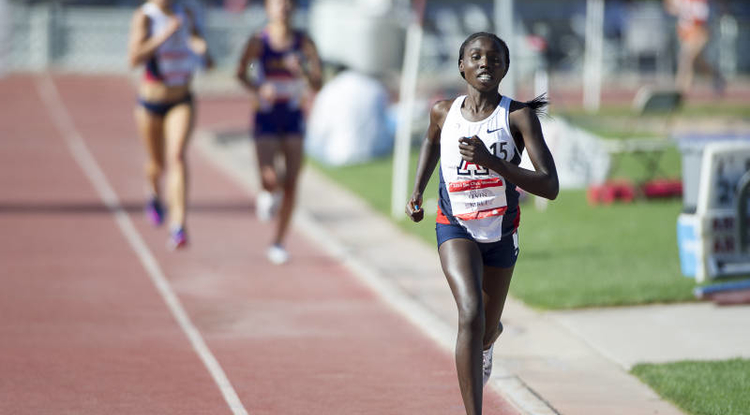 The native Kenyan wasn't well-trained when she came to the U.S., but she will leave the UA as one of the best distance runners in school history — and with big plans for the rest of her life.
Sean Collins
,
Arizona Athletics
May 5, 2015
Resources for the Media
Extra Info:

The UA's 151st Commencement ceremony will be held May 16 at 7:30 p.m. at Arizona Stadium. More information about the ceremony is available online for 2015 graduates and also family members and other guests.

More information about the UA's spring Commencement ceremony and the convocation events is available online: 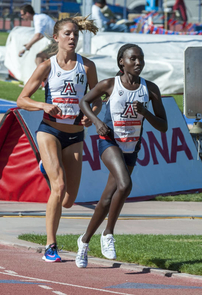 “Since a very young age, I’ve always taken risks. I take the big challenges. I always bulldoze into everything. So I said this is it, running, let’s do it. My sister gave me running shoes, they didn’t fit, but that was fine," says Elvin Kibet about how she began running. (Photo: J and L Photo)

That was the task that stood between Elvin Kibet getting from Eldoret, Kenya, to Tucson and the University of Arizona, where her college athletic and academic career of distinction ends this spring when she graduates from the UA on May 16.

Associate head coach James Li of the UA track and field program often makes recruiting visits to Kenya. He knew of the Kibet family because of two of Elvin's athletic sisters: Silvia won the silver medal in the 5,000 meters at the 2009 IAAF World Championships, and Hildah was a marathoner who was ranked in the top 10 in the world.

Elvin graduated from high school but didn't know what her next step would be. Going to a university in Kenya is far different from attending one in the U.S. A student's grades determine which universities will extend an invitation.

"I missed an A-minus once," Kibet said. "By just a little bit I missed it. I just considered myself a failure. I thought, 'I'm so done now.'"

Her sisters thought she should try running. Some people run so well that they go to America to compete in school, they told her. The option was intriguing.

One of Elvin's sisters was married to a man named Hugo, who knew Olympian Bernard Lagat, who trains with Li. That is how the dots got connected. Hugo got Li's email address, contacted him and said that Elvin was interested.

But her sisters wouldn't let her give up so easily. Silvia thought that if she could run a 5K in less than 15 minutes, then Elvin could do it in 17 minutes. That translates roughly to a 9-minute 3K.

Li already was heading to Kenya to check out another athlete, Lawi Lalang. In the email exchange with Hugo, Li said there would be a time trial with four people.

"I brought my video camera and recorded her running," Li said. "I watched it over and over. I just liked her ease, how effortless her mechanics were. There was just untapped potential there. She had no real training at that point. I thought, 'Here's another chance I’ll take.' It wasn’t an easy decision."

It took him a month to decide before he sent an email to Kibet, offering a full athletic scholarship to attend the UA.

And that's how Elvin Kibet left behind Eldoret, located on the equator.

"When I landed in Tucson, I had a bag about the size of a backpack. I saw Coach Li and he asked where the rest of my stuff was. You know, where my big bag was. I told him that all my stuff was right here in this bag. He just kind of laughed. He didn't really know what to say."

Kibet said that she finally felt comfortable after her second year at the UA, especially after connecting with others from Kenya. Li was able to lure Lalang to Arizona and Stephen Sambu was already on campus. Sambu and Lalang were the only people with whom Kibet could speak Swahili, her native language.

Then there was the training, which was another foreign language to her.

"When I got here, the training was just unbelievable," Kibet said. "They would go out for a long run and run for 90 minutes. I had never run for more than 15 minutes. It was so hot and I was so impressed with their work. It took me so long to accept long runs. But in time, it made me stronger."

And so much better. She became a six-time NCAA All-American, a three-time Mountain Pacific Sports Federation All-Academic honoree, a four-time Pac-12 Conference All-Academic honoree and the 2013 Pac-12 Cross Country Scholar Athlete of the Year. She holds the UA women's record at 5,000 meters (15:36.08) and has the second-fastest time at 10,000. Her brother, Collins, followed her to the UA, joining the men's team in 2013.

"Why I run is because I want to make a difference in my society," Kibet said. "I come from a really humble background. I look back and if it was not for the people who stepped up in my life and helped me, the people who gave me shoes, training programs, scholarships, I wouldn’t be who I am today."

Kibet, who will compete for the Wildcats in this weekend's Pac-12 meet in Los Angeles, plans on running for the next two years after she completes her college eligibility at the UA in June. She wants to attend graduate school to study global health and maternal and child care.

"Part of why I run is to be a voice for those people who don't have a chance," she said. "I want to be a really good runner and then be able to start these programs in Kenya or Africa or wherever. I want to help people, especially women and children. Getting a public health degree for me was perfect."

"We have a saying in Kenya: Charity begins at home," she said. "I will go back and start there. I plan on empowering women and young girls. I can be a witness and show them that I left the house. I went to university in America. I think I can be so inspirational. I want to empower women to be independent. I think that if women are independent and have things for themselves, our society can be different."

The UA was the spark she needed.