Documentary Takes Viewers Behind the Scenes of Phoenix Mission

The second film about the NASA Phoenix Mars Mission by Arizona Public Media will air on Tuesday, Oct. 13 at 9 p.m.
Steve Delgado
,
Arizona Public Media
Oct. 9, 2009
Resources for the Media
What:
Premier of "Phoenix Mars Mission: Onto the Ice"
When:
Tuesday, Oct. 13, 9 p.m.
Where:
PBS-HD Channel 6
HiRISE Image of Phoenix descent on the parachute (Credit: NASA/JPL/University of Arizona) 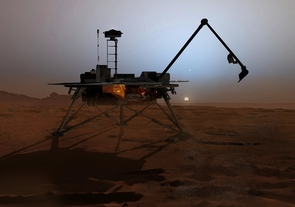 This artist's rendition shows the Phoenix Lander as it begins to shut down operations as winter sets in. No sun shines on Mars' far northern latitudes during winter. This marks the end of the mission because the solar panels can no longer charge the lander's batteries. As the atmosphere cools, frost will bury the lander in ice. (Artist: Corby Waste, Jet Propulsion Laboratory)

A new documentary from Arizona Public Media continues the enthralling story of the Phoenix Mars Lander's exploration of Mars and the subsequent confirmation of water ice just beneath the planet's surface.

"Phoenix Mars Mission: Onto the Ice" documents the experiences of the people responsible for the success of the Phoenix Mars Mission, which was led by the University of Arizona. The one-hour program premieres Tuesday, Oct. 13. at 9 p.m. on PBS-HD channel 6.

From practice landings and simulations to the real-life, heart-pounding "seven minutes of terror" spacecraft decent onto the planet's surface, "Phoenix Mars Mission: Onto the Ice" follows principal investigator Peter H. Smith and the rest of the Phoenix Lander team as they work to successfully land an exploratory vehicle on Mars for the first time in more 10 years.

The Phoenix Mars Mission series documents the exciting beginning of a new era in the search for signs of life on neighboring planets.

This film was produced by Tom Kleespie and his team, which included Martin Rubio, Jon Weigand and Jim Blackwood.

Filming took place at the UA Science Operations Center, working in conjunction with the Jet Propulsion Laboratory in Pasadena, Calif., and Lockheed Martin Space Systems in Denver, Colo. The UA was the first public university to lead a mission to Mars.

In addition to the Tuesday night premier, an encore broadcast of "Onto the Ice" will air on Sunday, Oct. 18, at 5 p.m.