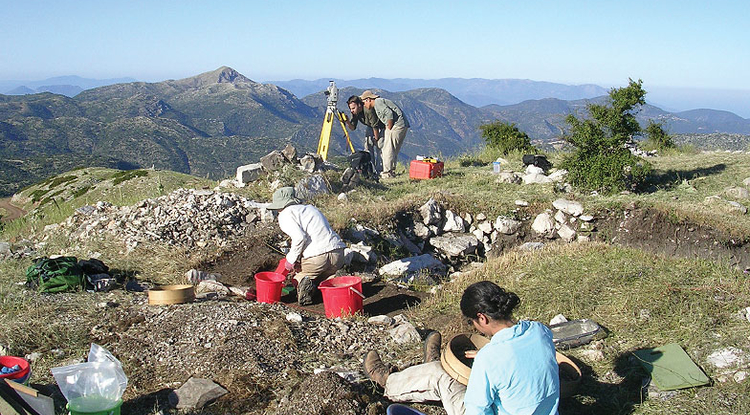 The project provides a rich training ground for aspiring archaeologists. During excavation years, more than 35 students work at the site. The researchers are exploring the relationship between Mt. Lykaion and the more famous sanctuary of Zeus at Olympia, only 22 miles away. Since there is now evidence that the sanctuary at Mt. Lykaion existed first, they think it is possible that Mt. Lykaion was the model for the sanctuary at Olympia.

Thanks to donor support, the UA School of Anthropology has been able to strengthen its Mediterranean archaeology program, establishing itself as the U.S. home for the Mt. Lykaion excavation, one of the most important digs in Greece.
Lori Harwood
,
College of Social and Behavioral Sciences
July 11, 2012
Resources for the Media 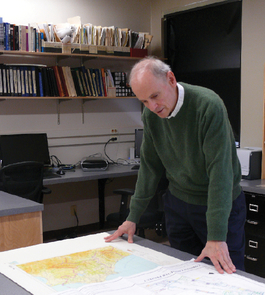 UA archaeologist David Romano has jumped into his work at the UA, quickly setting up the Archaeology Mapping Lab, which will benefit students from all over campus, including those in anthropology, classics, history, architecture and geography. The lab is dedicated to the scientific study of ancient cities and sanctuaries, using digital cartography, GIS (geographic information systems), remote sensing and other spatial analysis technologies. 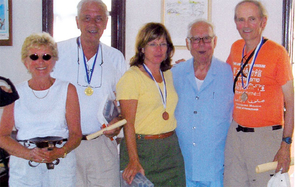 Athena and Nicolas Karabots, Mary Voyatzis, Nikos Kostopoulos and David Romano during a visit by the Karabots to the excavation in 2006.

When University of Arizona professor David Romano was 9 years old, his parents took him to Europe for the summer.

As soon as they arrived in London, his mother, a self-taught historian, took him to an area of the city bombed during World War II and pointed out specs of red mosaic in the ruins that were most likely from a nearby excavated Roman villa.

“This made a huge impression on me to see earlier civilizations in the great big modern city of London," said Romano, now co-director of the UA's Mt. Lykaion Excavation and Survey Project in Arcadia, Greece. "It was really my mother who first interested me in archaeology and antiquity.”

When Karabots was 9 years old, he was a shoe-shine boy from the South Bronx in New York City. He lived in a cold-water flat with his mother, father, brother and two sisters. As a teenager, he became involved in gangs.

Years later, Karabots and Romano would cross paths when Romano was serving as a faculty member at the University of Pennsylvania.

Romano asked Karabots, now a successful businessman, if he would be willing to support a project he was working on: the excavation of Mt. Lykaion, reported to be the birthplace of Zeus. Karabots said “yes,” and the rest, as they say, is history.

Nicholas and Athena Karabots had been supporting the excavation for several years when the opportunity arose for David Romano to join his Mt. Lykaion partner Mary Voyatzis in the UA School of Anthropology, which has one of the best archaeology programs in the country.

With a donation from the Karabots Foundation, the UA hired Romano, strengthening its Mediterranean archaeology program and establishing itself as the U.S. home for the Mt. Lykaion excavation, one of the most important digs in Greece.

“Although there was never a person who advanced any funds to help me out, there were people in business who extended a hand to me and gave me opportunities,” said Karabots, now the chairman of the Spartan Organization and its family of companies.

Karabots said he and his wife have decided to support children in underserved communities across Philadelphia and were invested in supporting the Mt. Lykaion project because it trains students and his parents were from Greece, among other reasons. In fact, his mother, Constance Chrisomalis Karabots, came from the village of Anavriti, Sparta, which overlooks Mt. Lykaion. His support is a way of honoring them and his Greek heritage.

In 2004, Romano and Voyatzis began directing the Mt. Lykaion Excavation and Survey Project, which is now a collaboration with Anna Karapanagiotou, the director of the ΛΘ’ Ephorate of Prehistoric and Classical Antiquities, under the auspices of the American School of Classical Studies at Athens. The project involves scholars from all over the world, including UA geologist and former Provost George Davis.

They have been excavating what is most likely the first Mycenaean mountain-top shrine from the ancient Greek world. The site contains an open-air ash altar, and, lower on the mountainside, a stadium, bathhouse, hippodrome for chariot races and other structures. The researchers are trying to answer questions about the origins of Greek cult and Greek athletics.

So far, research findings include:

Also, Romano and his colleagues have been working on an initiative of the Mt. Lykaion Excavation and Survey Project to create the first large-scale heritage park in Greece, the Parrhasian Heritage Park, and an archaeological museum in Megalopolis. Romano believes these may help the people in the local community turn to their cultural heritage and be less reliant on the local coal mine – which is running out of coal – for their economic survival.

And Romano and Voyatzis are working on a lengthy, preliminary report of the results from the past seven years of excavation and research.

“Now that David is here it is much easier for us to work on our joint publications together,” said Voyatzis. “We can be much more productive.”

“We now have ready access to other scholars working on our projects from geosciences, physics and the Arizona State Museum,” Voyatzis also said. “There is now a critical mass at the UA for Mt. Lykaion."

Romano is excited to be at his new academic home and is effusive in his appreciation of Nicholas and Athena Karabots. “The Karabots have been fantastic supporters of me and Mt. Lykaion and everything it represents from the very beginning. They have been loyal and genuinely interested in our success. I think the world of them.”