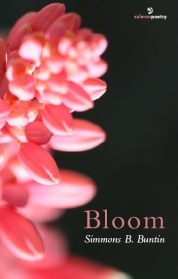 Buntin's second book, "Bloom," will be published in October.

Simmons Buntin has always enjoyed writing. In college, he penned song lyrics, despite a lack of any musical ability. He also enrolled in several poetry classes at Auburn University, completing an English minor to accompany his political science degree with an environmental concentration.

While his career took a somewhat different direction – Buntin started working in the technology world and he currently serves as Web program manager for the University of Arizona's Eller College of Management – much of his spare time is still devoted to the written word.

In October, Buntin, 41, will publish his second book of poetry, "Bloom." A follow-up to his 2005 debut "River Fall," the book contains poetry inspired largely by nature and Buntin's two daughters.

"I hope the readers will walk away with an understanding of how important to me family and place are, and the desert," he said.

In the spirit of literary role models such as essayist Edward Abbey and poet A.R. Ammons, much of Buntin's writing focuses on nature and exploring a sense of place.

(Listen to Buntin read one of his poems, "In May I Consider My Websites," which reflects on the obligations of work versus what one would rather be doing, against a backdrop of images he has taken as an amateur landscape photographer.)

In addition to his poetry books, Buntin's work, including poems and personal essays, has appeared in publications such as Southern Humanities Review, South Dakota Review, Mid-American Review, Orion and the Bulletin of Science, Technology, and Society.

But perhaps his most far-reaching contribution in the literary world is the online journal he founded 13 years ago and continues to manage as editor-in-chief.

In 1997, after completing a master's degree in urban and regional planning at the University of Colorado, Buntin and a fellow classmate founded Terrain.org: A Journal of the Built & Natural Environments when the concept of an online journal was still in its fledgling stages.

The journal, which publishes twice a year, is dedicated, according to its website, to "searching for that interface – the integration – among the built and natural environments, that might be called the soul of place."

It essentially explores how place impacts people and how people impact place and how that is interpreted through literature, technical articles and other writings, Buntin said.

"Bridging the literary and the technical, from an architectural or a land use or an environmental perspective, that was really grad school and urban planning that got me thinking along those lines," he said.

Terrain.org includes fiction, poetry, essays, interviews, case studies and more submitted by writers throughout the world, with various backgrounds and experience levels. Buntin writes a regular column relating to each issue's designated theme. The theme of the current issue is "Virtually There." The next issue, themed "The Signal and the Noise" publishes in September.

Buntin, who lived in Tucson briefly as a child, from 1977 to 1982, said he has always felt drawn to the uniqueness of the desert, which inspires much of his writing.

"I was really afflicted, in a good way, by the desert when I lived here from the third to seventh grade. It gets in your blood, and when you move away there's this longing. Ever since then, I've always had this longing for the Sonoran Desert and wanted to come back," he said.

Ten years ago, Buntin was working in Denver for the U.S. Department of Energy when he decided to moved his family back to Tucson to live in the Civano neighborhood, which he'd first learned about during graduate school. The southeast side neighborhood appealed to Buntin with its focuses on community building and environmental sustainability.  He has lived there with his wife and two daughters, ages 10 and 12, ever since.

Buntin worked in software development before starting six years ago at the Eller College, where he works in marketing communications, managing Eller's online marketing and web development programs.

In 2006, he decided to pursue a Master of Fine Arts degree in nonfiction creative writing from the UA, which he completed in 2009. During that time, he also took a landscape photography class to feed his nature photography hobby.

A self-proclaimed "night owl," Buntin does most of his writing after his daughters have gone to bed, though he admits this has taken a toll on his sleep since the girls have gotten older.

"Whereas I used to start writing at 8, now I'm lucky if I can start writing at 10:30," he said. "And I'm not getting any younger, so it's harder and harder for me. I've got to start finding ways that I can write during reasonable hours."

Buntin said his next project will be a nonfiction manuscript that focuses on place, fatherhood, community and how we can live more fully and more responsibly in our environments. The Civano neighborhood will serve as a backdrop for much of the piece.

When he's not writing or taking pictures, Buntin is an avid reader. Among his favorite books, as evidenced by the poster hanging in his McClelland Hall office, are the Harry Potter stories. His license plate (QUIDDCH) pays homage to the books' fictional Quidditch game, while his wife's plate (MGGLMOM) gives a nod to the J.K. Rowling's Muggle characters.

"Bloom" will be published by Ireland's Salmon Poetry in October. You can look for copies of it at the UA BookStore.