Expectations for the Southwest: Hot with Decades of Drought

A 60-year drought like that of the 12th century could be in our future, indicates new research by UA scientists.
Mari N. Jensen
,
College of Science
Dec. 13, 2010
Resources for the Media 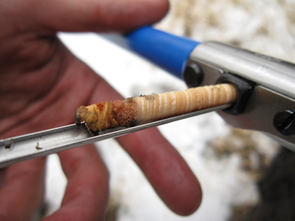 A core extracted from a living Douglas fir tree in the Santa Rita Mountains south of Tucson, Ariz. Scientists use such cores to study the annual rings of trees, visible on the core as banding. Collecting such cores causes only temporary injury to the tree. (Photo credit: Copyright 2009 Daniel Griffin) 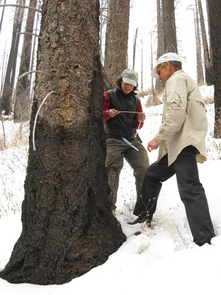 Annual tree rings record a detailed history of drought (narrow rings) and wetness (wide rings). This sample from a dead Douglas fir tree in the Santa Catalina Mountains near Tucson, Ariz., has nearly 400 rings and dates back to the year 1600. Stress cracks, visible in the foreground of the image, occur as the dead wood dries and contracts. (Photo credit: Copyright Daniel Griffin.)

An unprecedented combination of heat plus decades of drought could be in store for the Southwest sometime this century, suggests new research from a University of Arizona-led team.

To come to this conclusion, the team reviewed previous studies that document the region's past temperatures and droughts.

"Major 20th century droughts pale in comparison to droughts documented in paleoclimatic records over the past two millennia," the researchers wrote. During the Medieval period, elevated temperatures coincided with lengthy and widespread droughts.

By figuring out when and for how long drought and warm temperatures coincided in the past, the team identified plausible worst-case scenarios for the future. Such scenarios can help water and other resource managers plan for the future, the team wrote.

"We're not saying future droughts will be worse than what we see in the paleo record, but we are saying they could be as bad," said lead author Connie A. Woodhouse, a UA associate professor of geography and development. "However, the effects of such a worst-case drought, were it to recur in the future, would be greatly intensified by even warmer temperatures."

The team's paper is part of the special feature, "Climate Change and Water in Southwestern North America," scheduled for publication the week of Dec. 13 in the Early Online edition of the Proceedings of the National Academy of Sciences.

The analysis in the current paper includes previous research by Woodhouse, co-author David M. Meko and others that documented past droughts that lasted several decades. Moreover, some of those droughts occurred during times of relatively warm temperatures.

Within the last 2,000 years, there have been several periods of severe and sustained drought that affected much of western North America.

Droughts that are accompanied by warm temperatures have more severe impacts on ecosystems, said Meko, an associate research professor in the UA's Laboratory of Tree-Ring Research.

During the Medieval period, temperatures were about 1.8 degrees Fahrenheit (1 C) above the long-term average. Average temperatures in the Southwest have been warmer than that since 1990 and are projected to increase at least another 3.6 F (2 C) by 2100, Woodhouse said.

The most severe warm-climate drought in the Southwest within the last 1,200 years was 60 years long and occurred during the mid-12th century, according to research by Meko and others. That drought covered most of the western U.S. and northern Mexico.

For a 25-year period during that drought, Colorado River flow averaged 15 percent below normal, according to the tree-ring-based reconstruction of stream flow at Lees Ferry.

For every 1.8 degree Fahrenheit (1 C) of warming in the future, Colorado River flow is projected to decrease between two and eight percent, Woodhouse and her co-authors wrote.

The Colorado River supplies water for cities and agriculture in seven western states in the U.S. and two states in northwestern Mexico. Los Angeles, Las Vegas, Denver, Phoenix, Tucson and Albuquerque are among the many cities dependent on Colorado River water.

"Even without warming, if you had one of those medieval droughts now, the impact would be devastating," she said. "Our water systems are not built to sustain us through that length of drought."

Noting that the Colorado River flows recorded at Lees Ferry from 2000 to 2009 are the lowest on record, Woodhouse said the current drought could be part of a longer dry period. The instrumental record from Lees Ferry goes back to 1906.

"As this drought unfolds you can't really evaluate it until you're looking back in time," she said.

In recent decades, temperatures have been higher than during the previous 1,200 years, and future temperatures are predicted to be even warmer, Woodhouse said.

In addition, other research predicts that changes in atmospheric circulation will reduce the amount of winter precipitation the Southwest receives in the future, she said.

"The bottom line is, we could have a Medieval-style drought with even warmer temperatures," Woodhouse said.

The paper by Woodhouse, Meko and their colleagues is titled, "A 1,200-year perspective of 21st century drought in the southwestern North America." Co-authors are Glen M. MacDonald of the University of California, Los Angeles; Dave W. Stahle of the University of Arkansas in Fayetteville; and Edward R. Cook of Lamont-Doherty Earth Observatory of Columbia University, Palisades, N.Y. 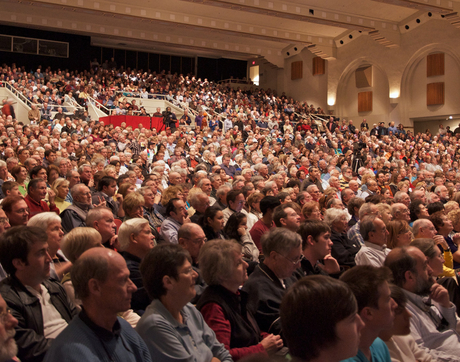 'Catalysts of Change' is Theme of Arizona Science Lecture Series