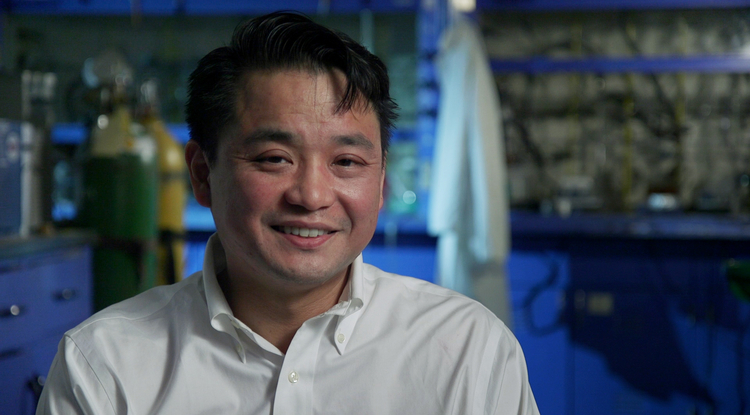 Jeffrey Pyun, a professor in the UA Department of Chemistry and Biochemistry, was elected as one of 66 inaugural senior members of the National Academy of Inventors. (Photo: Bob Demers/UANews)

Faculty Elected Senior Member of the National Academy of Inventors

UA professor Jeffrey Pyun is one of 66 inventors around the nation honored with a newly launched designation.
Paul Tumarkin
,
Tech Launch Arizona
Feb. 25, 2019
Resources for the Media

The National Academy of Inventors has named 66 academic inventors to the inaugural class of NAI Senior Members, including Dong Chul "Jeffrey" Pyun, a professor in the Department of Chemistry and Biochemistry at the University of Arizona.

National Academy of Inventors, or NAI, Senior Members are active faculty, scientists and administrators at NAI member institutions with success in patents, licensing and commercialization. They have produced technologies that have brought, or aspire to bring, real impact on the welfare of society. Senior members also foster a spirit of innovation within their communities while educating and mentoring the next generation of inventors.

Pyun has delivered in all of these areas, establishing himself as an international leader in polymers and materials that broadly impact the areas of information storage, optical materials, sulfur utilization, photocatalysis-solar fuels and energy storage. He has made sustainability and the environment core themes in his work.

Pyun's research has generated seven granted patents in the U.S. and more than 10 in other countries. His most important invention to date has been the direct use of the vast abundance of waste sulfur from petroleum refining as a new chemical feedstock for the production of advanced materials for commodity and specialty markets, such as sulfur polymers for infrared thermal imaging.

“Professor Pyun's most recent work in transforming elemental sulfur into a deformable and easily processed 'plastic' has led to a whole new generation of lithium batteries and new types of optical materials that can be uniquely applied in the infrared region, where there are significant new imaging needs for both telecommunications and defense and security applications," said UA Interim Vice President for Research Kim Ogden.

Two of Pyun's granted U.S. patents have been licensed to Innovative Energetics LLC, a company he co-founded with other UA faculty colleagues to commercialize proprietary sulfur-based polymers.

"Throughout his career, Pyun has not only been academically prolific, he has also prioritized creating impact through his work with students and his dedication to applying research to address real-world problems," said Doug Hockstad, assistant vice president of Tech Launch Arizona, the office of the UA that commercializes inventions stemming from research. "His ongoing achievements add to the growing leadership of the UA as a home for innovation and the development of solutions to the grand challenges of our day."

After 21 years of practice, Pyun's early-career contributions have earned him a number of awards, including the NSF CAREER Award, the Office of Naval Research Young Investigator Award, the Alfred P. Sloan Foundation Research Fellowship award and the Kavli Fellowship.