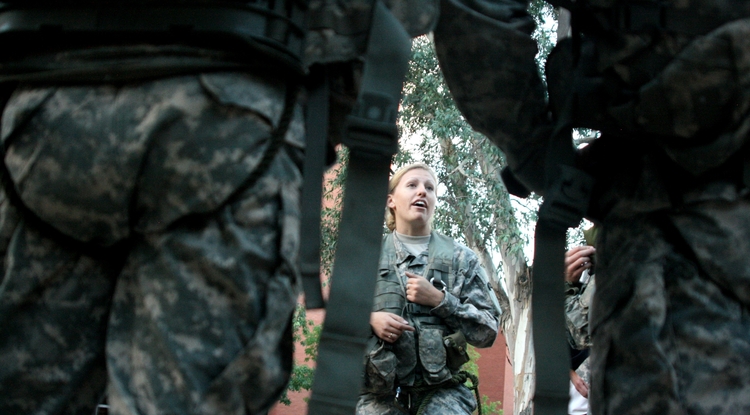 UA mechanical engineering senior Maurissa Wortham served as the UA Reserve Officers' Training Corps Ranger Challenge Team captain. In a a male-dominated sport, the UA team also has "a strong female presence," she said. "We're not used to seeing that." 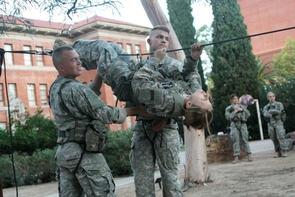 Maurissa Wortham clips onto the one rope bridge with help from cadets David Smith (left) and Jacob Denno. In the background observing are cadets Kendall Johnson and Jamee Wohle. 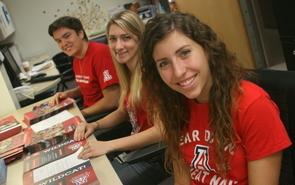 Cadet Joseph Robles, a first-semester student at the UA, leads the team in the Ranger's Creed after morning physical training. Robles was previously enlisted in the U.S. Army in the 75th Ranger Regiment and, upon graduation, wants to commission and rejoin the Ranger Regiment as an infantry officer.

Following the year in which the University of Arizona Reserve Officers' Training Corps Ranger Challenge Team saw the greatest number of female cadets in its history, the team also had a female captain in Maurissa Wortham.

This year, Wortham led the extracurricular team in competitions against schools from Arizona, Texas, Colorado, New Mexico and elsewhere, ultimately taking a third consecutive victory in the 11-school regionals and finishing at the brigade level in the top five of 36 schools in 5th Brigade. During the brigade competition, which closed last Sunday in Texas, the UA team placed first in the written exam section and at the M16 range.

"It was a huge accomplishment to be in the top five," said Wortham, a UA senior in mechanical engineering.

"We have mostly freshmen and sophomores, which is unusual. So, I am so proud of the team," she said. "Usually, to operate at such a high level, you have people with similar experiences and the same understanding. But this shows that we have had really strong upperclassman leadership."

And in a male-dominated sport, the UA team also has "a strong female presence," Wortham said. "We're not used to seeing that. I don't understand what's in the water here." In 2011, then-UA student Sarah Blakeley also served as a captain.

As team captain, Wortham has led the co-ed team of 10 cadets in physical fitness training as well as technical and tactical skills development — all supplementing the in-class instruction members received. Another female, Marissa Rives, served as the captain for a secondary group of emergent team members who did not compete but spent the term focusing on skills development.

Team-captain aspirations were not in the plans for Wortham, who just completed her third year on the UA Ranger Challenge team. In fact, the position does not come by application but by appointment, with UA ROTC leadership each year selecting the lead.

"During my first year on the team, I was easily at the bottom," recalls Wortham, whose high school in Tucson did not have a JROTC program. "And I'm still not the fastest or the strongest."

"Maurissa is a multifaceted leader who displays an amazing ability to critically think and adapt to any situation," Haskins said. "She is as tough as they come and has continued to train, sometimes even with broken bones. She leads by example and set a successful and positive environment for her team."

Rives, a Pima Community College transfer student studying mechanical engineering at the UA, aspires to serve in the U.S. Army Special Forces, with a keen interest in serving as a Ranger.

"Originally, I wanted to enlist right out of high school, although after talking to different family members I decided that school first would be the best option, and ROTC allowed me to express my patriotism sooner, while I earned my degree," said Rives, who, drawn to the competition, aspires to one day serve as a Ranger.

"Being in Ranger Challenge also requires you to become as physically fit as you possibly can, which I find to be a very important attribute in preparation for combat readiness," Rives said.

With the end of the UA Ranger Challenge team's season this week, Wortham turns leadership over to Tucson native Clayton Richardson, a natural resources junior, who will serve as captain for the next year.

"Clayton is the epitome of setting the example and maintaining an elite level of fitness. He is an exceptional leader who has an ability to stay calm through adversity," Haskins said. "Both Maurissa and Clayton are examples of excellence and showcase what a young American can do regardless of circumstance. I am honored to have been a small part of their development. They both have taught me as much as I have taught them. I have served in Special Operations for over 26 years, and I would take both of them with me into combat. That is the greatest compliment I can ever give them."

Richardson, who intends to serve as an officer in the Army National Guard and eventually become a career firefighter, has been involved with the team for more than two years, with this being his third competition season.

"I chose to join Ranger Challenge because I've heard it to have some of the most hard-working and physically fit cadets in the program, as well as a tight-knit team," he said. "To this very day, I can confirm that these were cold hard facts.

"This year, one of the biggest highlights and proudest aspects of the team was not simply that we were highly successful in competition, but the success that was achieved with an almost entirely new team," Richardson said, noting that nine of the 11 traveling-team members were new to competing. "This aspect of the team was undetectable from most outsiders looking in because the bond within our team was — and is — stronger than ever in regards to previous years."

Richardson said that, with his second-in-command, Dave Smith, his vision for the team in the next year is to bolster the team's weak points.

"The ultimate fate of this team will not be dictated by us, but rather by the entire team as a whole," Richardson said. "Every success and achievement that this team sees is owed to each and every one of our hard-working teammates, so as we press forward with our training, we will reflect their ambitions, goals and vision of where they want to be and what they want to become together as a team."

For Wortham, her ultimate goal is not to serve as an Army Ranger or in the U.S. Army Special Forces, but rather as an active-duty helicopter pilot for the U.S. Army. The UA ROTC program, she said, is affording her that future.

In 2014, she landed an internship with the U.S. Navy, where she had a chance to explore flight test engineering. "I decided that summer and told my mom, 'I'm going to join ROTC for that military career I've always wanted,'" she said.

On Nov. 21, Wortham will learn which branch she will be joining as a commissioned officer.

"I enjoy ROTC because it's a challenge, but there are other things I would like to pursue," she said.