Smoke plumes from southern California wildfires billowing out over the Pacific ocean. The red outlines indicate active fires. These wildfires spread over a two-week period in October 2007, burning more than 500,000 acres, according to the California Department of Forestry and Fire Protection. (Credit: MODIS Rapid Response Project at NASA/GSFC) 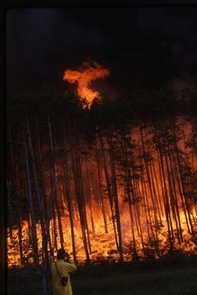 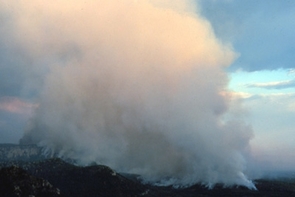 The Dude fire began just northeast of Payson, Ariz. on June 25, 1990. The fire, caused by a dry lightning storm, burned more than 24,000 acres before it was declared controlled 10 days later. Sixty-three homes were destroyed, and six firefighters were killed. (Credit: William E. Wright, 1990)

Fire's potent and pervasive effects on ecosystems and on many Earth processes, including climate change, have been underestimated.

This is according to a new report from a team that includes Thomas W. Swetnam of The University of Arizona in Tucson.

"We've estimated that deforestation due to burning by humans is contributing about one-fifth of the human-caused greenhouse effect – and that percentage could become larger," said co-author Swetnam, director of UA's Laboratory of Tree-Ring Research.

"It's very clear that fire is a primary catalyst of global climate change," he said. "The paper is a call to arms to earth scientists to investigate and better evaluate the role of fire in the Earth system."

The team also reports that, currently, all fires combined annually release an amount of carbon dioxide into the atmosphere equal to 50 percent of that coming from the combustion of fossil fuels.

"Fires are obviously one of the major responses to climate change, but fires are not only a response – they feed back to warming, which feeds more fires," he said.

The very fine soot, known as black carbon, that is released into the atmosphere by fires also contributes to warming.

"The scary bit is that, because of the feedbacks and other uncertainties, we could be way underestimating the role of fire in driving future climate change," Swetnam said.

The report's 22 authors call for the Intergovernmental Panel on Climate Change, or IPCC, to recognize the overarching role of fire in global climate change and to incorporate fire better into future models and reports about climate change.

David Bowman, a lead co-author, said, "We're most concerned that fire has not been rigorously and adequately incorporated in the climate models. It's remarkable that such an integral part of the landscape has been so sidelined."

Swetnam, Bowman of the University of Tasmania in Hobart, Australia, the other lead co-author Jennifer K. Balch of the National Center for Ecological Analysis and Synthesis in Santa Barbara, Calif. and their colleagues will publish their paper, "Fire in the Earth System," in the April 24 issue of the journal Science. A complete list of authors is at the end of this release.

Because fire on Earth predates humans, its ubiquitous activity is simultaneously accepted and overlooked. Bowman says, "Fire is extraordinarily obvious, but deeply subtle."

A more complete understanding of how the Earth works requires recognizing how fire is intertwined with and also a driver of human history and the Earth's history, the authors write.

Balch said of the article, "This synthesis is a prerequisite for adaptation to the apparent recent intensification of fire feedbacks, which have been exacerbated by climate change, rapid land-cover transformation, and exotic species introductions."

She commented about "fires where we don't normally see fires," and pointed to the occurrence of bigger and more frequent fires from the western U.S. to the tropics.

Swetnam said that, in addition to the burning in the tropics, huge tracts of the boreal forests of Siberia, Canada and northern Europe burn each year.

"The role of fire in forests in the boreal zone is unappreciated," he said.

"Russian forests alone contain more than 50 percent of the carbon stored on land in the Northern Hemisphere," Swetnam wrote in an e-mail, adding that warming is happening fastest at high latitudes.

In some recent years, the acreage burned in the forests of Siberia exceeded the size of the U.S. state of Virginia, he said. As the world warms, more of those regions are likely to burn, accelerating the warming.

"Fire is as elemental as air or water. We live on a fire planet. We are a fire species. Yet, the study of fire has been very fragmented. We know lots about the carbon cycle, the nitrogen cycle, but we know very little about the fire cycle, or how fire cycles through the biosphere."

The article is a result of a workshop supported by the Kavli Institute for Theoretical Physics and the National Center for Ecological Analysis and Synthesis, both based at the University of California, Santa Barbara and both funded by the National Science Foundation.