UA entomologists have published a report on their discovery of Bt-resistant bollworms in Mississippi and Arkansas.
Mari N. Jensen
,
College of Agriculture and Life Sciences
Feb. 7, 2008
Resources for the Media
Extra Info: 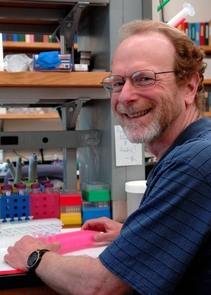 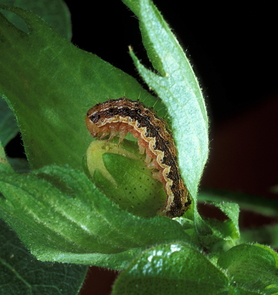 A bollworm, Helicoverpa zea, munches down on a cotton flower bud. This insect, a pest of cotton in the southeastern U.S., eats all parts of the cotton plant. In some places, bollworm have as many as six generations in one growing season. (Credit: USDA-Agricultural Research Service)

A pest insect known as bollworm is the first to evolve resistance in the field to plants modified to produce an insecticide called Bt, according to a new research report by University of Arizona entomologists.

Bt-resistant populations of bollworm, Helicoverpa zea, were found in more than a dozen crop fields in Mississippi and Arkansas between 2003 and 2006.

"What we're seeing is evolution in action," said lead researcher Bruce Tabashnik, professor and head of the UA entomology department and an expert in insect resistance to insecticides. "This is the first documented case of field-evolved resistance to a Bt crop.”

Bt crops are so named because they have been genetically altered to produce Bt toxins, which kill some insects. The toxins are produced in nature by the widespread bacterium Bacillus thuringiensis, hence the abbreviation Bt.

"Resistance is a decrease in pest susceptibility that can be measured over human experience," Tabashnik said. "When you use an insecticide to control a pest, some populations eventually evolve resistance."

The researchers write in their report that Bt cotton and Bt corn have been grown on more than 162 million hectares (400 million acres) worldwide since 1996, “generating one of the largest selections for insect resistance ever known."

Even so, the researchers found that most caterpillar pests of cotton and corn remained susceptible to Bt crops.

The field outcomes refute some experts' worst-case scenarios that predicted pests would become resistant to Bt crops in as few as three years, he said.

“The only other case of field-evolved resistance to Bt toxins involves resistance to Bt sprays," Tabashnik said. He added that such sprays have been used for decades, but now represent a small proportion of the Bt used against crop pests.

The bollworm is a major cotton pest in the southeastern U.S. and Texas, but not in Arizona. The major caterpillar pest of cotton in Arizona is a different species known as pink bollworm, Pectinophora gossypiella, which has remained susceptible to the Bt toxin in biotech cotton.

Tabashnik and his colleagues' article, "Insect resistance to Bt crops: evidence versus theory," will be published in the February issue of Nature Biotechnology. His co-authors are Aaron J. Gassmann, a former UA postdoctoral fellow and now an assistant professor at Iowa State University; David W. Crowder, a UA doctoral student; and Yves Carrière, a UA professor of entomology. Tabashnik and Carrière are members of the UA's BIO5 Institute.

The U.S. Department of Agriculture funded the research.

"Our research shows that in Arizona, Bt cotton reduces use of broad-spectrum insecticides and increases yield," said Carrière. Such insecticides kill both pest insects and beneficial insects.

In bollworm, however, hybrid offspring produced by matings between susceptible and resistant moths are resistant. Such a dominant inheritance of resistance was predicted to make resistance evolve faster.

The UA researchers found that bollworm resistance evolved fastest in the states with the lowest abundance of refuges.

The field outcomes documented by the global monitoring data fit the predictions of the theory underlying the refuge strategy, Tabashnik said.

Although first-generation biotech cotton contained only one Bt toxin, called Cry1Ac, a new variety contains both Cry1Ac and a second Bt toxin, Cry2Ab. The combination overcomes pests that are resistant to just one toxin.

The next steps, Tabashnik said, include conducting research to understand inheritance of resistance to Cry2Ab and developing designer toxins to kill pests resistant to Cry1Ac.