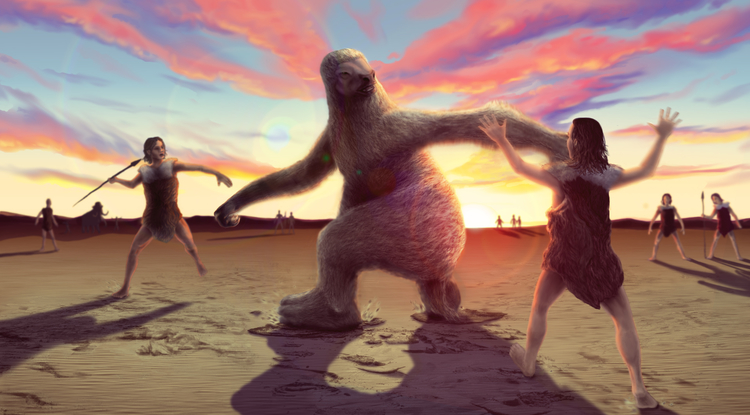 Artist's rendering of a giant ground sloth being hunted by humans. Recently discovered footprints provide the first evidence that this scenario may have occurred in North America during the late Ice Age. (Illustration: Alex McClelland/Bournemouth University)

Researchers found fossilized human footprints inside the ancient footprints of a giant ground sloth, leading them to believe a human may have stalked the animal in a hunting expedition at the end of the Ice Age.
National Park Service and University Communications
April 30, 2018
Resources for the Media 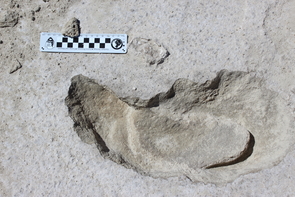 Human footprint inside a sloth track. This composite track is part of a trackway in which the human appears to have stalked the sloth. (Photo: Matthew Bennett/Bournemouth University) 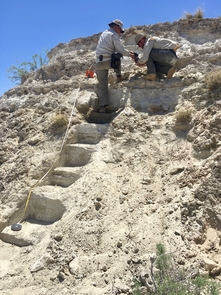 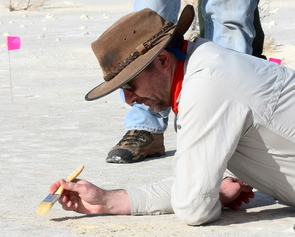 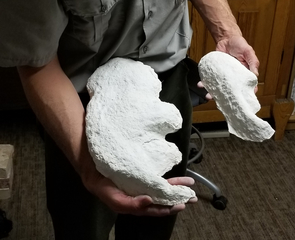 On a remote salt flat in New Mexico's White Sands National Monument, a team of scientists has found the first evidence that humans, at the end of the Ice Age, may have hunted giant, razor-clawed ground sloths.

The White Sands trackway — a series of tracks and footprints left by animals and humans as long as tens of thousands of years ago — suggests that a human followed a sloth, purposely stepping in the animal's tracks, said David Bustos, the park naturalist who discovered the trackway 10 years ago.

Bustos and a team of researchers, including University of Arizona anthropologists Vance Holliday and David Raichlen, and UA geoscience doctoral student Brendan Fenerty, describe their findings in a new article in Science Advances.

"This wasn't just one human footprint and one sloth footprint. Somebody was walking along, purposely putting their feet in the sloth tracks," said Holliday, a UA professor of anthropology and geosciences. "It's pretty amazing to see that sort of fleeting evidence of behavior. You don't see that kind of thing very often in the really early archeological record."

Study co-author Matthew Bennett, a professor of environmental and geographical sciences at Bournemouth University in England, believes the footprints indicate that ancient humans stalked the sloth.

"So we ask why? Adolescent exuberance? Possible, but unlikely," Bennett said. "We see interesting circles of sloth tracks in these stalked trackways, which we call 'flailing circles.' These record the rise of the sloth on its hind legs and the swing of its fore legs, presumably in a defensive motion."

At seven to eight feet tall, with tightly muscled legs tipped with wolverine-like claws, the sloth would tear apart any hunter on direct approach. But in addition to the human tracks following the sloth, researchers found more human tracks a safe distance away, suggesting a community action that made use of distraction and misdirection to gain the upper hand in deadly close-quarter combat. Bennett believes the tracks show the sloth was turning and swinging at the stalker.

"We also see human tracks on tip toes approach these circles; was this someone approaching with stealth to deliver a killer blow while the sloth was being distracted? We believe so," Bennett said. "It was also a family affair, as we see lots of evidence of children's tracks and assembled crowds along the edge of the flat playa. Piecing the puzzle, we can see how sloth were kept on the flat playa by a horde of people and distracted by a hunter stalking the sloth from behind, while another crept forward and tried to strike the killing blow as the animal turned."

The Fleeting Nature of 'Ghost Fossils'

While early humans in North America were known for hunting mammoths and mastodons — and their relatives, gomphotheres — the idea that they may also have hunted giant sloths, which could weigh between 600 and 1,000-plus pounds, is new, Holliday said.

"It seems like there's some sort of interaction between humans and sloths because of the similarities of the weathering of the footprints, and because there are no deposits between the human and sloth tracks," Holliday said. "This has never been documented in North America, so that's telling us something. We didn't have very good documentation of sloths in the area — and that late in time."

There is a great deal more to learn in years to come, said research team member Vince Santucci, senior paleontologist with the National Park Service.

"And we're pretty motivated to keep looking and studying," Santucci said. "These fossils are called ghost fossils for a couple of reasons. One, they're difficult to see at times because of different atmospheric and moisture conditions — and the light has to be just right. And second, the fossil footprints are ephemeral. Once the overlying sand dunes move and reveal the tracks, they start to weather away and can be gone in months."

High on the list of things to be learned is the question of just when this episode of hunters and hunted took place. The Ice Age ended about 11,700 years ago and the fossil record of ground sloths indicates they were extinct by this time.

At White Sands National Monument, the scientists used an approach called relative dating to estimate a minimum age for the fossils.

"Since the footprints are contemporaneous with animals that died out by the end of the Pleistocene, relative dating tells us those footprints are at least 11,700 years old, or older," Santucci said.

Holliday is conducting research at the White Sands National Monument focusing on ancient Lake Otero, which preserved the tracks. Just a couple hundred yards from where the human and sloth tracks were discovered is a key exposure of old deposits, and he hopes he can help date the tracks more precisely, using carbon dating he's done at the lakebed site.

"What we need to do is try to trace the deposits with the tracks into the exposed lakebed to see if we can figure out where the layer with the tracks is, relative to our carbon 14 dates," he said.

The multi-disciplinary team of federal, state and academic scientists, technicians and naturalists who authored the paper did their work under a research permit at a remote site in a dangerous area of the park's backcountry that is not open to the public.

Park superintendent Marie Sauter said the research team's documentation — photographs, video, plastic casts of the footprints and other materials — will be helpful for park visitors.

"We will benefit from their work by using all of this to develop interpretive materials that people can see, touch and experience at the park visitor center or online at National Park Service websites," she said.