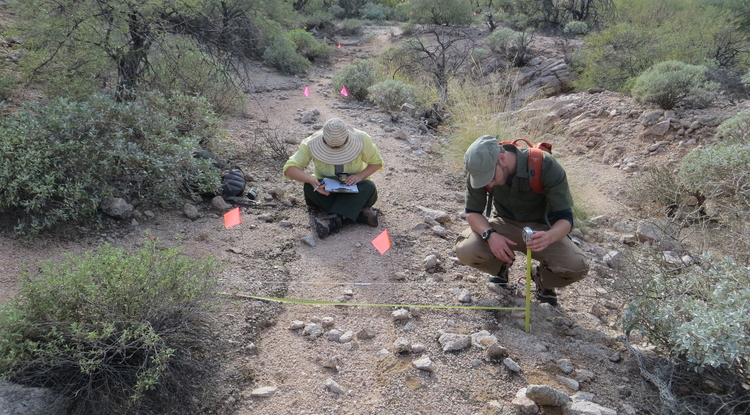 Former UArizona graduate students Sharlot Hart (left) and Mario Battaglia record the physical attributes of a trail used by the Tohono O'odham in Organ Pipe Cactus National Monument. The work was part of a project to find and document the ancient trails so the National Park Service can preserve and protect them. (Photo courtesy of T.J. Ferguson) 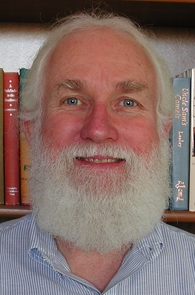 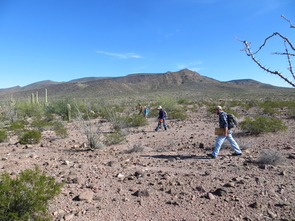 Researchers do an archaeological survey in search of trails to document. Once a trail was found, researchers would trace it as far as it would lead them. (Photo courtesy of T.J. Ferguson)

A network of trails used by the Tohono O'odham for thousands of years crisscross what is now Organ Pipe Cactus National Monument. However, the trails' precise locations were largely unknown – until now.

A team of University of Arizona researchers, from 2014 to 2019, searched for and documented 11 of the trails for the National Park Service. The agency funded the project to preserve and protect the trails as archaeological sites.

The research team, led by T.J. Ferguson, a professor of anthropology and the principal investigator for the project, documented enough information about four of the trails to assemble nomination materials for the National Register of Historic Places. The nomination is awaiting a decision by the State Historic Preservation Office before it goes to the National Register of Historic Places for a final decision. The process is likely to take another year or two, Ferguson said.

Ferguson talked to UANews about how the trails have been used for thousands of years, how his team found them, and the importance of preserving the ancestral knowledge that they hold.

Q: In the interest of protecting the trails, their exact location isn't being publicly released. But, generally, where are they and how did you set out to find them?

A: There's a trail network that extends throughout Southern Arizona that connects Native villages with resources and important places like the Gulf of California. Part of this trail system crosses Organ Pipe Cactus National Monument. By using historical documents and maps, people have a general idea of where these trails run, but their physical location on the ground is less certain. What the Park Service wanted to know, because they're interested in preserving archaeological sites and managing them, is where these trails were located on the ground so that they could be protected as archaeological sites under the National Historic Preservation Act.

Q: How far back does the use of these trails go?

A: Thousands of years. If you go to Hohokam sites, occupied by the Hohokam archaeological culture, like Casa Grande, or other large sites, you'll find that there's lots of shell and occasionally obsidian from Mexico that are in these sites. So, these trails were used to transport that material for thousands of years.

But they were also used just to connect villages with other villages. On Organ Pipe Cactus National Monument, there was an O'odham settlement at a community called Quitobaquito, and there was another O'odham settlement at Bates Well, and these trails were used by people visiting their relatives in other villages. There are also mines in the area, and so in the 19th century when mining started, O'odham people found jobs working in the mines, and they would also use these trails to go to work.

Although people don't physically walk along most of these trails today, they're still used in the sense that people have values for them and are concerned about them and they're meaningful to them. And, in fact, there's some interest in reviving the use of some of these trails as they become known.

Q: How did you go about documenting them?

A: On the first day of fieldwork on this project, we went to one of these archaeological sites in which a trail segment had been recorded – a short trail segment, maybe 20 meters, was on the map. It just has a polygon around the site and then it shows a trail going through it. We relocated that archaeological site and found that trail that's on the map, and then we walked about 3 or 4 kilometers along that trail to try to trace the trail as far as we could.

Then, in areas where we thought the trail should be but we weren't sure where it was on the ground, we would do archaeological transect surveys where you line up with six or eight people and systematically walk across the land, and then shift and go the other direction and just walk back and forth until we found the trail. Once we found a trail, we would try to trace that trail as far as we could take it.

For the first year, we did remote sensing using Google Earth. Some of these trails show up on Google Earth. The second year, we brought on board G. Lennis Berlin, a remote-sensing specialist. He looked at satellite imagery and all the aerial photographs that he could locate to find trails on the images, and we then went out and verified those trails.

Q: Why is it important for agencies such as the National Park Service to include ancestral knowledge, like the kind found in these trails, in managing the lands they oversee?

A: Most people think of archaeological sites in terms of the habitations that people used or maybe the artifact scatters that resulted from special activities. But these trails are also archaeological sites; they just run for a really long distance on the ground. So, it's really important to bring together the people who have the knowledge, in this case the O'odham people, with the people who are doing the management, and that was a goal. This project was a real team effort. Former students Maren Hopkins, Michael Spears and Sharlot Hart helped edit the project report, with chapters authored by many students. The park archaeologist, Lauren Kingston, and chief of resources, Rijk Morawe, guided the project research.