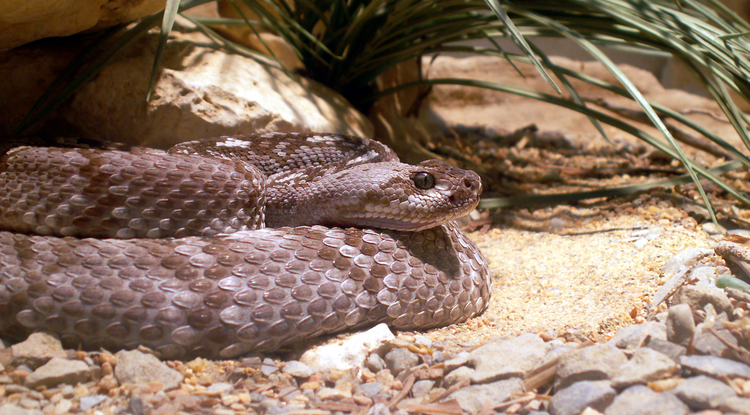 A University of Arizona wildlife ecologist shares what researchers know about when, where and why snakes are scarce in the winter, and how climate might change their behavior.
Emily Litvack
,
Office of Research, Innovation and Impact
Nov. 20, 2019
Resources for the Media

When snakes hibernate during the cold-weather season, they are far from inactive, at least metabolically speaking. They’re shutting down their systems, conserving energy and revving up for reproduction, according to a rattlesnake expert at the University of Arizona.

Matt Goode, assistant research scientist in the School of Natural Resources and the Environment, has published more than 40 peer-reviewed journal articles and book chapters related to ecology and conservation of herpetofauna, particularly snakes. He is an investigator in the university’s world-renowned Venom Immunochemistry, Pharmacology and Emergency Response, or VIPER, Institute, which is affiliated with the BIO5 Institute and the College of Medicine – Tucson. Goode is especially interested in how urbanization and conservation efforts affect snakes.

Q: Why do rattlesnakes hibernate during the winter?

When winter temperatures get too cold, snakes typically go underground or into natural shelters, like rockpiles or mammal burrows, to avoid freezing. As it turns out, being an ectotherm has some advantages, like being able to essentially shut down your system and save energy rather than spending it on trying to stay warm. Rattlesnakes are very long-lived – about 15 to 20 years, or more – relative to their body size because they’re really good at conserving energy. They will stop feeding and enter into a sometimes long period of inactivity.

That said, the timing and length of the overwintering period varies by species. One species that I have studied extensively is the tiger rattlesnake, which is a smaller, retiring species that tend to go into their dens from late October to early December. Western diamondback rattlesnakes, a larger, more common species, will go into their dens a little later, on average.

For the most part, around Tucson, at this elevation and with the winters we have, almost all reptiles undergo a hibernation period. There’s some debate on whether we should call it “hibernation” or “brumation,” which is essentially  hibernation in ectotherms, but for our purposes it’s OK to call it hibernation, or a period of winter inactivity.

Q: Where do snakes den?

A: Where and how snakes den also varies by species. Tiger rattlesnake dens are in rocky outcrops, so they go into the cracks and crevices of rocks – about 2 to 4 feet down – and you don’t see them again until spring. The Western diamondback typically dens on rocky slopes or in small caves that form on the sides of washes. They may hibernate inside a pack rat den or along with other reptiles, such as Gila monsters and desert tortoises. And unlike tiger rattlesnakes and black-tailed rattlesnakes, both of which tend to den by themselves, Western diamondbacks often den in groups of up to 10 to 20 individuals in the same area.

In colder northern climates, rattlesnakes can form huge denning aggregations. I studied prairie rattlesnakes in Wyoming, where one den contained over 600 individuals! In really cold climates, the ground can freeze up to 4 to 6 feet deep, and the reason there were so many snakes in one spot is probably because suitable dens sites are limited.

Q: Because snakes are ectotherms, if the warming trend in our climate continues, will that have some effect on rattlesnakes?

A: This is a very important question for people who study snakes and other reptiles that live in temperate climates, where hibernation is the rule. Warming of the climate could change the time of year when snakes go into their dens – called ingress – and when they come out – called egress. Climate warming could affect the cues that cause rattlesnakes to come out of their dens, because if warmer temperatures tell them it’s time to come out, they’d end up coming out sooner, which may increase the risk of exposure to cold spells or may not coincide with when their prey are more active.

A warming climate could change the timing of their reproduction, as well. For rattlesnakes, winter triggers hormonal changes that allow them to become reproductively active, so they actually need the cold to allow them to produce certain hormones that are important for reproduction. In fact, females who have mated the summer before store sperm from the males over winter, during hibernation. When they come out of the den in the spring and warm up, they can develop eggs that are then ovulated and fertilized by the stored sperm.

Females come out of the dens earlier than males because they want to get their ovaries warmed up and get follicles to grow enough so they can be ovulated. And then, eventually, when they give birth, it’ll be right around monsoon season, when there are more prey resources.

Q: If rattlesnakes hibernate, why are they sometimes seen outside during colder months?

A: If you do see a snake out in the winter, it’s usually one of two things going on. The first is that it will mostly likely be a juvenile. We’re not quite sure why that is, but I have found it to be much more common to see young snakes out during colder weather than older, mature snakes. The other is that the snake might be sick. It may have some kind of bacterial infection, so it’s forced to come out and bask to keep its temperature elevated, fight off infection, and maintain the healing process. This is called a “behavioral fever,” and it’s been documented in tortoises as well. As with other systems, the immune system is also temperature dependent.

During the winter months around Tucson, you may very well see a snake out, but for the most part, you’re unlikely to see them. If you do see one, you’ll probably see it hanging out on a warmer day, still very close to its den.

If you do see a rattlesnake, whether during winter or summer, when they are more active, you can rest assured that it’s not out to get you. It’s important to note that the overwhelming majority of people bitten by rattlesnakes are bitten because they were messing with the snake. If you stand back and give the snake plenty of room, it will likely disappear, and you’ll never see it again. That said, the possibility of venomous snakebite still exists, but it is extremely rare. The most important thing is to get to the hospital as quickly as possible. Never let a venomous snakebite go untreated by medical professionals.