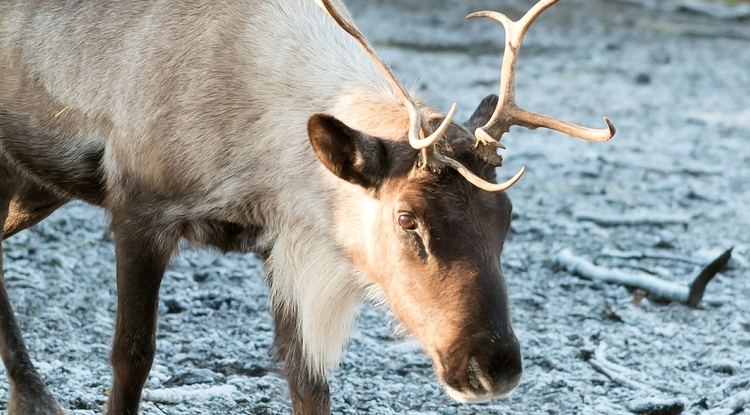 Reindeer have a special place in holiday folklore. 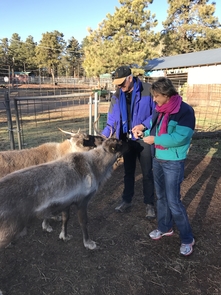 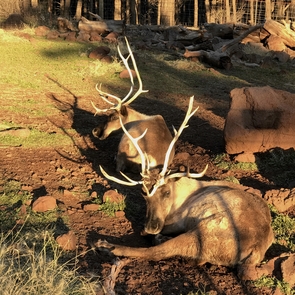 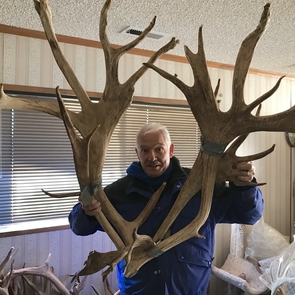 Dieter Steklis holds a set of reindeer antlers, which can weigh up to 50 pounds while developing. (Photo courtesy of Dieter and Netzin Steklis) 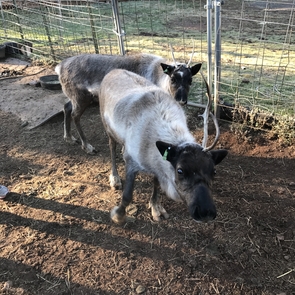 Reindeer have long snouts to warm the cold air they breathe. (Photo courtesy of Dieter and Netzin Steklis)

Donner, Dasher, Blitzen … they're the animal stars of the holidays, but what do we know about the antlered creatures beyond their seasonal mythology?

University of Arizona faculty members Netzin and Dieter Steklis discuss some of the facts and fables of reindeer life as part of their Human and Animal Interrelationships class, a popular general-education course offered to about 1,000 students every fall.

Reindeer, also known as caribou in North America, are mostly confined to the circumpolar region — yes, near the North Pole — but they also can be found in Northern Europe, Siberia, Alaska, Canada and Greenland. There is even a small herd in northern Arizona.

The Steklises recently went to the Grand Canyon Deer Farm in Williams, Arizona, to visit with some reindeer. After the trip, they shared insights about how the animals achieved their status in storybooks and what makes them unique in the real world.

Netzin Steklis is a lecturer in the School of Animal and Comparative Biomedical Sciences and in the Department of Family Studies and Human Development in the John and Doris Norton School of Family and Consumer Sciences. Her husband, Dieter, is a professor and program director of anthropology and psychology at UA South, and is also a co-lecturer with Netzin. Together, they started the UA's Human-Animal Interaction Research Initiative, which aims to understand and promote the health and well-being of humans and animals in symbiotic relationships.

Q: Where did the story of Santa's reindeer-drawn sleigh begin?

Dieter: The mythology of Santa with flying reindeer is a product of American creativity in the early 1800s. Recall the poem by Clement Clarke Moore that begins, "'Twas the night before Christmas, and all through the house …" We read this classic tale to our young boys during the holiday season, but when I was a child in Germany my only memory of reindeer is how terrible it tasted. How did an 18th-century New Yorker come up with the idea of a tiny Santa in a sleigh pulled by eight tiny flying reindeer? There are several competing theories about the origin of this myth, but not any one is well-supported. In fact, this American invention seems to be a mashup of Norse mythology — Thor, the god of storms, who rode across the sky in a chariot pulled by two goats similar to "Donar" and "Blitzen," which I recognize as Germanic/Dutch words for thunder and lightning — combined with the Scandinavian celebration of "Sinterklaas," gift-giving in honor of St. Nicholas that sounds awfully similar to "Santa Claus." There's also a sprinkle of a cultural practice of the indigenous Saami, or Laplanders — people that live in the Arctic, far north of Norway, Sweden, Finland and Russia, as semi-nomadic reindeer herders who rely on reindeer to pull all their worldly possessions on a sleigh. Did I mention that the Saami also feed their reindeer psychedelic mushrooms? When the reindeer get "high," the Saami drink their urine to share in the experience. The mushroom is toxic to humans, but if it is processed through the reindeer, it is not. Maybe when they got high, they saw visions of reindeer flying!

Netzin: Unusually, both male and female reindeer grow antlers. In other deer, only the males grow them. They take enormous energy to grow and can weigh 30 pounds when they fall off and span four to five feet wide, but they probably weigh close to 50 pounds while they are filled with blood as they are growing. The males even grow a "shovel" in front that is used to protect the eyes from oncoming antlers and to scrape the ice and snow to get to lichen underneath. Males lose their antlers after the rutting season, when males fight for access to females. But females keep them longer into December, presumably because the antlers help in protecting their calves from predators and in competing for food with other herd members. Even a big male cannot push around a female with antlers. So, next time you see Santa's reindeer, check if they have antlers. If so, they must be females! You go, girls!

Q: What are some of the most unique physical characteristics of reindeer?

Dieter: Well, whenever you mention reindeer, often people think of Rudolph, the storybook red-nosed reindeer. Reindeer have long noses that warm the extremely cold air they breathe before it gets to the lungs. Because they are curious, they also use that nose to explore and investigate. When visiting the reindeer (at the Grand Canyon Deer Farm), we were amazed at how they were sniffing us out like a dog! Why does Rudolph have a red, glowing nose? Perhaps he is cold? Not likely, since reindeer also have special, hollow fur that traps air so that even in frigid winds, they stay warm. Perhaps Rudolph's red nose helps him navigate at night? Reindeer actually do well in low light, which is the condition during much of the year in the northern latitudes where they live. Their eyes capture any light reflected from snow, and they can even see in the UV range, like bees. This is particularly helpful since the lichen they eat glows in the UV range. So, they don't need help from Rudolph's luminous muzzle.

Another interesting trait of reindeer has to do with an unusual sound you hear when among a herd. The popular Christmas-carol lyric "up on the housetop, click, click, click" may refer to more than the sound of hooves. Reindeer have tendons that click when they walk. It sounds like when you crack your ankle. Recently, researchers found that loud knee clicking is an "honest signal" of body size — the bigger the reindeer, the louder the clicking, and perhaps the more attractive to the lady reindeer.

Q: Are reindeer wild or domesticated?

Netzin: Reindeer occur as both wild and domesticated and even feral — domesticates that "go wild" and breed with undomesticated ones. Reindeer offer an interesting case that illustrates what happens to animals on the path to domestication, where reproduction is fully controlled by humans. One feature of animals that are domesticated is that they are tame in their behavior. The disposition of our reindeer friends (at the farm) was very calm, unlike other deer. And they need very little or no sedative — it could actually kill them — whereas other deer need sedative when handled by a vet. They also have a short flight distance. That means that a human can approach the animal to within a short distance before it begins to flee. These reindeer are very curious by nature and have a relatively short flight distance, compared to our Arizona pronghorn, which flee if they see you a mile away. Tolerance of humans and short flight distance are probably products of domestication. In fact, the flight distance is different for feral versus wild reindeer. Because they are partially domesticated, feral reindeer have a shorter flight distance compared to their wild herd mates. One student raised his hand in our class and asked, "Why would Santa select reindeer to deliver presents all over the world if they have a short flight distance?" He is now one of our research assistants.